Why would a traditionally published author give exclusivity to Amazon for a new book? I thought I knew the answer, but I discovered the reasons are as varied as writers and book genres.

Publish In a New Genre

I'm a successful finance trade book author published through John Wiley & Sons, but I had other manuscripts that didn't fit Wiley's publishing model: novels, an anthology of blog posts, and non-fiction memoirs. Award winning traditionally published fiction writer Libby Fischer Hellmann, told me it was time for these manuscripts to come out of the closet. There was no need to spend my limited free time scouting agents and publishers. Self-publishing had come of age. Dozens of traditionally published authors were publishing their own work.

But that doesn't explain why one would publish exclusively with Amazon. Amazon's closest--yet still very distant--competitor is Apple, and I found it to be user unfriendly. (See: "Apple Taxes Authors' Patience.") Amazon has free Kindle Reading Apps so you can read Kindle books on any device, including Apple's.

Amazon's share of the U.S. eBook market is around 70 percent, and authors can publish in several languages reaching Great Britain, Canada, Western Europe, India, and Australia. Authors can easily make changes at any time. Did a reader find a typo -- let's hope not, but even traditionally published books often have typos -- authors can correct it immediately. New cover? Authors can upload it in seconds. Authors can also change the price. Changes are fast and easy, well within 24 hours.

In July 2014, Amazon launched an eBook subscription service called Kindle Unlimited. For less than $10 per month, subscribes can borrow books not only by independent authors, but also by traditionally published authors, albeit some publishing houses have declined--for now--to participate. Nonetheless, many popular mainstream authors are part of the program. Readers will find the Hunger Games series, Harry Potter, and much more.

If you own an Apple device or Android, as of May 2015, you can download an app to read eBooks with Amazon's new fantastic readable font: Bookerly.

Amazon has revived short-form narrative through its Kindle Singles in-house publishing brand with a professional editorial team headed by New York journalist and editor David Blum. Kindle Singles include essays, works of journalism, and books 5,000-30,000 words in length, perfect when you want a short satisfying story. Kindle Singles include a spectrum of fiction and non-fiction. The team receives thousands of submissions per month and chooses--in its opinion--the best of the bunch. As an author, I love the idea of curated works. 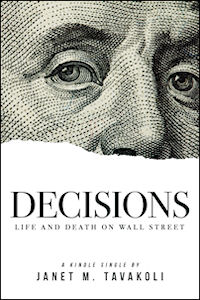 In the wake of scandals and suicides, I submitted a short non-fiction Wall Street memoir, Decisions: Life and Death on Wall Street. As I awaited a response, my team created eBook files, and I published using Amazon's Kindle Direct Publishing platform. Nomi Prins, author of All the Presidents' Bankers, wrote a thought-provoking review for the Huffington Post.

I was delighted when I later received an email from Kindle Singles: "We'd love to have DECISIONS in the Kindle Singles store. We agreed it's a gripping and eye-opening memoir that takes readers into a world they couldn't access otherwise. A highly engaging read."

I worked with one or their first-rate copy editors, and others reformatted the interior and designed a more commercial-looking cover that sports a picture of Ben Franklin.

I am not a well-known author, at least outside the niche world of finance, so it is a thrill to publish on a platform with famous authors including Lee Child and Stephen King.

Singular Prices on an Exclusive Platform

Digital publishing is evolving, and Amazon is creating unique opportunities for readers and writers.