This analysis indicates that Amazon Prime now has 65 million US members, spending on average about $1,200 per year, compared to about $600 per year for non-member customers. The current membership figure compares to an estimated 47 million US members at the end of the September 2015 quarter, or an increase of 38% in one year. 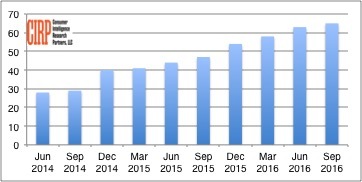 US Amazon Prime membership continues to grow, although at a slower pace than before. As Amazon starts to reach a limit of available US households, it saw its annual growth rate decline a bit. Sequential growth, from the June 2016 quarter, also slowed, to 3%, compared to 7% in the June 2015 to September 2015 quarter, which benefitted greatly from the inaugural Amazon Prime Day.

A monthly payment plan is pretty clever, and will no doubt help with conversion rates. Amazon has seen a leveling in the rate at which free trial customers convert to full members, from 66% two years ago to 62% in the most recent twelve-month period. Allowing free trial members to pay only $10.99 monthly, rather than spending $99 all at once, should help improve that conversion rate. In addition, we predict the monthly payment option will improve Amazon Prime's already very high retention rate, by eliminating the $99 annual decision point. Of course, for a single membership the monthly payment option also increases Amazon's fee revenues by about one-third relative to the single annual payment, so monthly payments also boosts Amazon's revenues.

CIRP bases its findings on surveys of 500 US subjects who made a purchase at Amazon.com in the period from July-September 2016. For additional information, please contact CIRP.