This analysis indicates that Amazon Prime member retention rates improved over time. 30-day free trial conversion to one-year paid membership has recovered, following the price increase to a $99 annual fee, while renewal for one and two year paid members has climbed from already high levels. 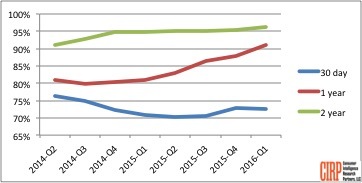 With Amazon Prime, Amazon confronts two or possibly three critical moments in retaining members. It needs to persuade 30-day free trials to pay $99 for a full-year membership, and then persuade first-year paid members to renew for a second year. It also needs to persuade second-year members to continue a membership, ideally to continue year after year. Customers that join on a 30-day free trial base the decision in part on the free trial experience, and mostly on their expectation of using Amazon Prime over a full year. Customers that finish the first year have more data, and decide whether to pay for a subsequent year based on how much they actually used Amazon Prime during their first full year.

The impact of the price increase from $79 to $99 for an annual membership announced in March 2014 likely contributed to the lower conversion rate for 30-day free trials, as it made the leap from a free 30-day trial to a full year subscription a little bigger. When it announced the price increase, Amazon enhanced the benefit mix with a larger library of streaming video, including more original programming, a selection of free e-books, online photo storage, and occasional Prime members-only products and pricing. This contributed to the improved retention rate for customers after the first year of membership.

Once Amazon Prime members renew for a second year, Amazon appears to have attracted them for the long haul. After a second year, renewal rates are over 95%, and have improved gradually in the past two years.

CIRP bases its findings on its quarterly surveys of US Amazon shoppers. This analysis comprises 2,108 US subjects who shopped at Amazon.com from March 2013-March 2016 and who have or had an Amazon Prime membership at the time of the survey. For additional information, please contact CIRP.