The Amazon rain forest's dry season lasts three weeks longer than it did 30 years ago, and the likely culprit is global warming, a new study finds.

Rain falls year-round in the Amazon, but most of the annual deluge drops during the wet season. (The rainy season's timing varies with latitude.) Scientists think that a longer dry season will stress trees, raising the risk of wildfires and forest dieback. The forest's annual fire season became longer as the dry season lengthened, according to the study, published today (Oct. 21) in the journal Proceedings of the National Academy of Sciences.

The new findings forecast a more parched future for the Amazon rain forest than the climate report released last month by the Intergovernmental Panel on Climate Change (IPCC), the study authors said. The IPCC models predict the Amazon dry season will last three to 10 days longer by 2100.

But with the dry season already spanning an extra week each decade since 1979, the Texas team said the future effects will be more severe. 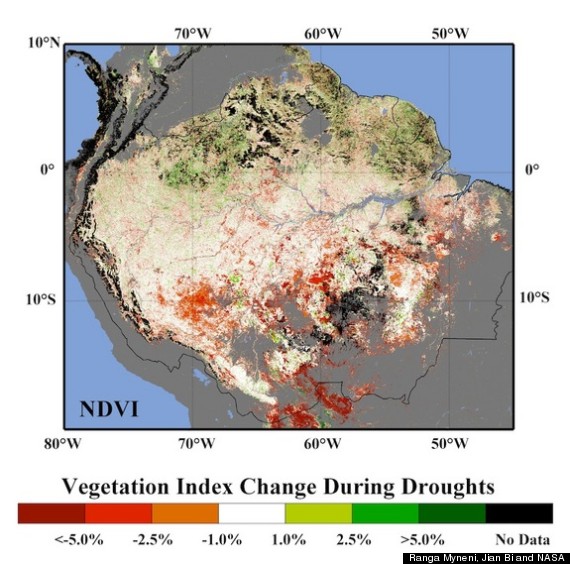 During the 2005 and 2010 droughts, satellites detected decreased vegetation greenness over the southern Amazon rain forest (orange and red regions).

"The dry season over the southern Amazon is already marginal for maintaining rain forest," Fu said. "At some point, if it becomes too long, the rain forest will reach a tipping point."

Fu and her colleagues analyzed rainfall patterns across the Southern Amazon rain forest since 1979, and plugged the data into 50 simulations from eight climate models. The climate models from the IPCC's AR5 report, released in September, reported smaller dry season changes than actually measured since 1979. This means the IPCC models likely underestimate future predictions of rain forest climate change effects, the researchers conclude.

Global warming can limit tropical rainfall across the southern Amazon in two ways, Fu explained. First, shifts in the southern jet stream can block cold fronts that trigger rainfall. (In the Northern Hemisphere, extremes in the northern jet stream pattern have been linked to wacky weather, such as the unusually warm winter in 2012.) Rising surface temperatures, attributed to global warming, also make it harder for storms to start. The heat inhibits "convective energy," keeping warm, dry air near the surface from rising and mixing with cool, moist air above.