The urge to define Amazon’s newest original series, “Transparent,” as just a show about a transgender parent coming out to her family is strong, but maybe also misplaced. The series is about a father, Mort, transitioning to a woman, Maura, and while "Transparent" deals with the struggles and complications of being trans in today’s society, it also has so much more ground to cover.

“Being trans questions the binary and there are so many things about this show that question the binary,” Jill Soloway, creator, writer and director of “Transparent” told HuffPost Entertainment earlier this month in New York City. That may be the most apt way to approach the new series, which premieres all 10 episodes of its first season on Amazon Prime on Friday. “Transparent” doesn’t just aim to tell the story of a trans character, but of an entire family questioning their understandings of gender, sexuality and identity, and learning to accept and love one another as they each evolve into who they are. 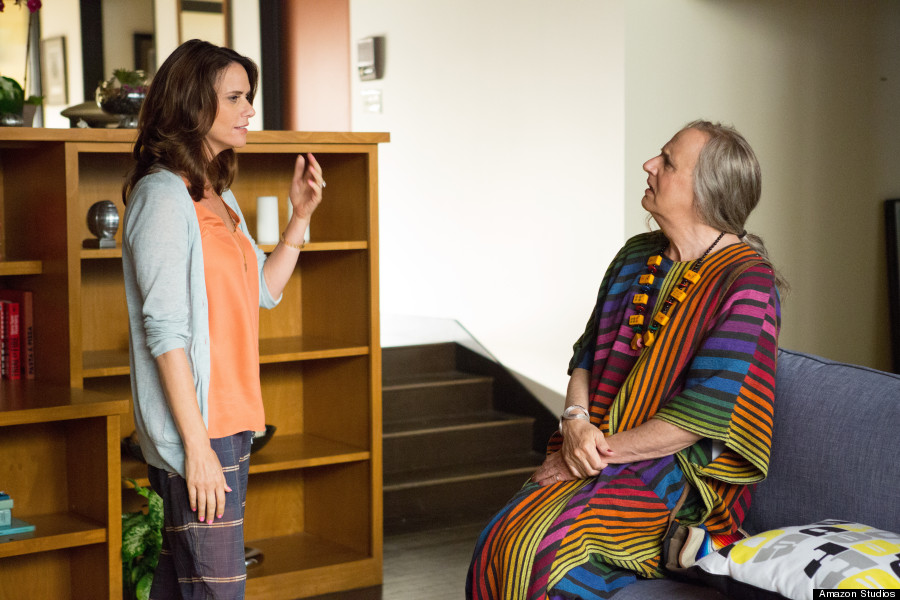 "That was and is the most fantastic voyage that I’ve ever been on, because it was a voyage to myself, and a voyage to real humility, scared stiff."

While sitting in the Bryant Park Hotel, Soloway and star Jeffrey Tambor told us about the conception of the series and the areas it explores and addresses. Soloway, who was a writer and producer on “Six Feet Under” and “United States of Tara,” wanted to tell a story about the birth of a new parent, defying the Disney trope of the always-immediate death of a mother or father. She described the semi-autobiographical series -- her own father came out to her as trans a few years ago -- as one about “a parent coming out and what it would mean to have a blossoming new member of the family arrive.” As Tambor’s Mort Pfefferman begins to publicly transition to Maura, the skin of his male identity is left behind. Maura is then able to reveal her true self. In the trailer for “Transparent,” Maura’s oldest daughter, Sarah (Amy Landecker), asks if she's going to start dressing up like a woman now. Maura's reply: “All my life, I’ve been dressing up like a man.”

Tambor was handed the script for “Transparent” when he got off a plane. Within 20 minutes, he knew he had to meet Soloway right away. “There’s about six or seven roles in a lifetime where you go, “I have to be in this,” the “Arrested Development” actor told us. When asked about how he crafted his character, and whether he approached it as a man transitioning to a woman or a woman having always dressed as a man, Tambor sat in silence for a few moments.

“Two stages,” he then said. He described the pilot as stage one, and the rest of the episodes as Maura’s stage. “Maura was always very clear to me,” Tambor said, “But I had to get to Maura, and Maura had to kind of get to me."

As far as researching how to approach playing a trans character, Tambor worked with two transgender consultants and did a lot of reading -- Soloway gave out multiple books on gender and sexuality to the cast and crew, including 200 copies of Julia Serano’s “Whipping Girl: A Transsexual Woman on Sexism and the Scapegoating of Femininity.” 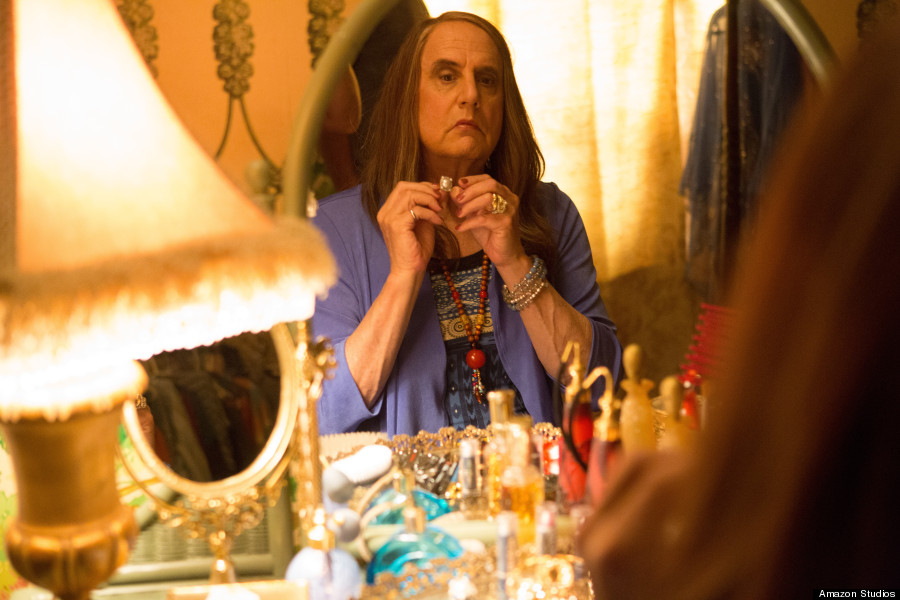 "As you grow and change, you become possibly someone else. You want to go back to your family of origin and say, ‘Do you still love me? Is this unconditional love and if not what are the conditions?'"

But Tambor knew that reading and research could only do so much. "It's very scary and I’ve never talked about this, but at a certain point you have to put it down,” Tambor said.

As a cisgender male, or a person who identifies with the gender they were assigned at birth, Tambor said he caught himself questioning how he played the role at times.

“I remember one weekend where I texted you,” Tambor said to Soloway, sitting across from him. "'Am I doing all right?' I just went, 'Ah! This is big!' I felt I have a responsibility to the community, and this is important!" Yet the beauty of playing a character who is discovering herself on the page not only helped Tambor, but added even more depth and color to Maura.

“Maura is very young in her development and Jeffrey is very young, as a cisgender male, in understanding what this is,” he told us. “So some of my mistakes were actually advantageous to making Maura. I put my politics into the performance and I made her real, elegant, smart, not smart, wise, not wise, beautiful, not beautiful, and human." After previewing four episodes of the series, we can attest to his powerful and poignant performance. "That was and is the most fantastic voyage that I've ever been on, because it was a voyage to myself, and a voyage to real humility, scared stiff."

But beyond Maura, there is the rest of the Pfefferman family, each of whom are on their own journeys of self discovery. There's Sarah, who’s married to a man and has two children, but begins questioning her sexuality once she runs into her old girlfriend from college, Tammy (Melora Hardin). There’s Josh, played by Jay Duplass, a record producer who is dating a younger girl. And then there’s Gaby Hoffmann’s Ali, whom the actress explained to us is “just beginning to feel uncomfortable and unsatisfied” in her skin and gender. While each of these characters are on their own quest of understanding their identities, Soloway reminded us that “Transparent” is still primarily about family.

“As you grow and change, you become possibly someone else,” Soloway said. “You want to go back to your family of origin and say, ‘Do you still love me? Would you still love me if I become X or Y or Z? When will you stop loving me? Is this unconditional love and if not what are the conditions?’" All four family members are asking those questions of each other throughout the show. 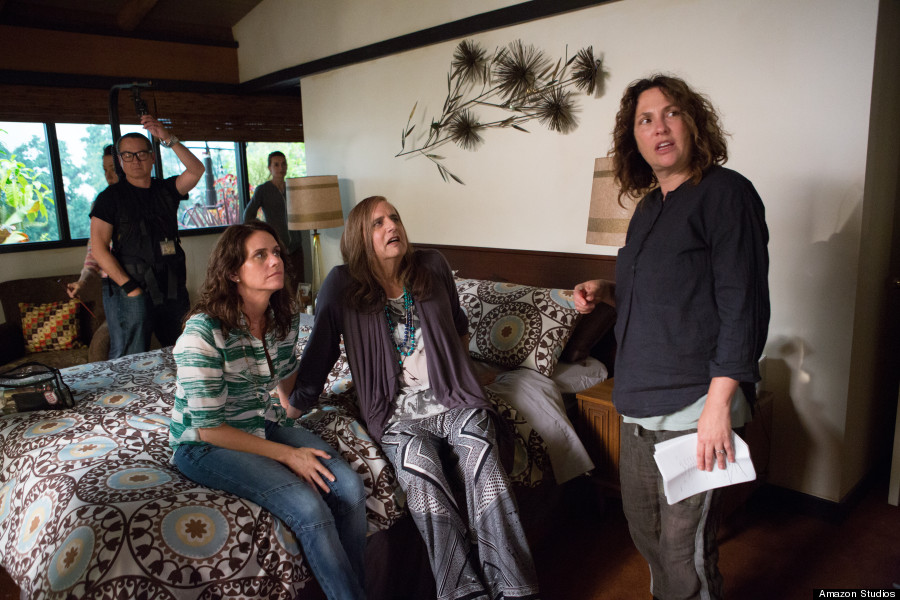 "I hope we’re going to further along getting to place where we don’t need to ask those questions and not give such a shit about what other people do with their genitalia, because it’s mind-boggling."

While what Soloway is doing with a show like “Transparent” is revolutionary in a variety of ways, the 48-year-old recognizes that she has made mistakes before and is constantly learning new things.

To further her and everyone’s knowledge about trans issues on the set, Soloway not only brought on two trans consultants, but also hired trans actors and crew members, and used gender neutral bathrooms on the set. While working with consultants Zackary Drucker and Rhys Ernst, Soloway said she continued to learn more every day from how people always ask about surgery when talking about trans folk -- “as if there’s ‘a' surgery,” she said -- to how lacking our culture is in trans representation.

Hoffmann, in a separate interview, also chimed in about the necessity to start conversations about gender and sexuality. “I hope we’re going to further along getting to a place where we don’t need to ask those questions and have those debates,” Hoffman said. “And everybody can just fucking mind their own business and respect one another and not give such a shit about what other people do with their genitalia, because it’s mind-boggling.” 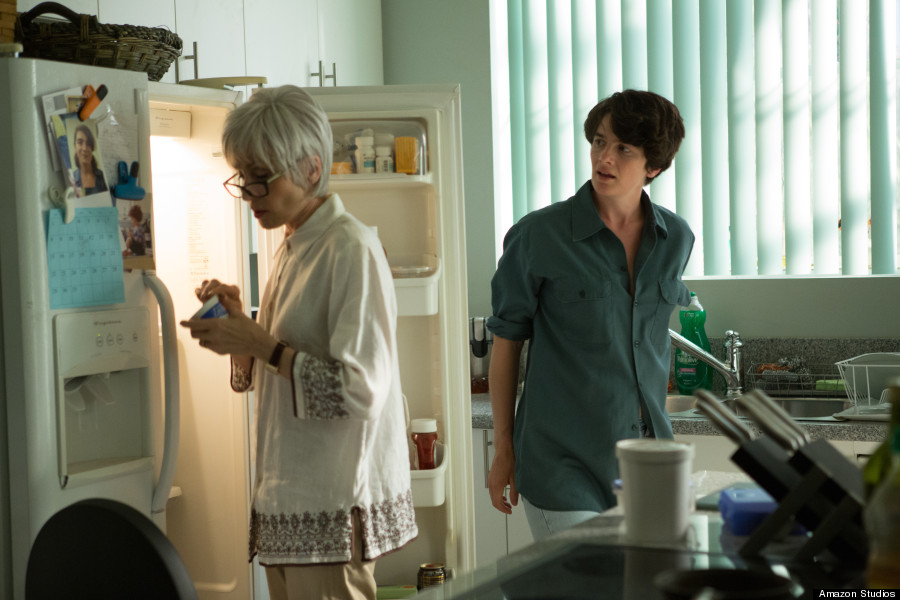 With the recent rise in focus on the trans community, thanks to the likes of Laverne Cox and Martine Rothblatt, there’s no better time than now to begin the conversation that “Transparent” is likely to jump start. Soloway hopes that her series will change audience's understanding of queer people. She likened “Transparent” to “Will & Grace,” saying that she hopes it will do for the trans community what the NBC sitcom did for the gay community.

“There were a lot of people all over the country who didn’t think they knew any gay people, but then they knew 'Will & Grace' and Jack," she said. "I’m hoping that people will be able to look at their understanding of trans-ness as sort of un-foreign after they see ‘Transparent.’”

But at the end of the day, no matter how you approach the series, it’s undoubtedly one that everyone -- gay, straight, trans, cis and all people in between -- can relate to. “It’s a show about a queer family, but it’s really a show about a family.”