It's a heady experience to be surrounded by world leaders, so it was a particular pleasure for me to attend a special celebration of the adoption of the new Global Goals by the 193 government members of the United Nations.

The intimate, elegant event was held at the Friars Club last week, attended by an interesting group of 150 dignitaries and friends of Africa. My good friend Dr. Judy Kuriansky was the perfect host, as a member of the club, and a leader of civil society who was very active in advocacy during the negotiations of the Global Goals. 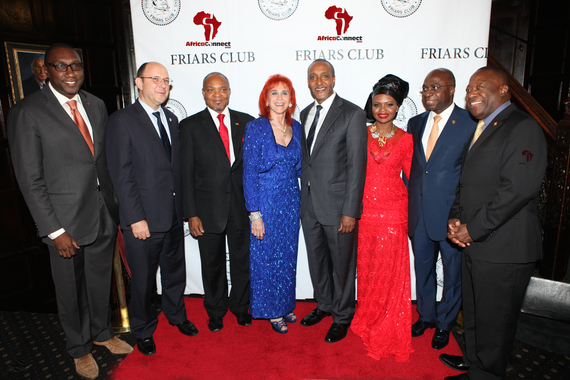 I stood right in front of the stage as Dr. Judy gave out awards to ambassadors and high-level officials who played a major role in drafting the agenda and chairing the negotiations. In classic Friars Club-like humor, she said the awardees were as worthy of a Tony or Oscar for their performance on the international diplomacy stage as the celebrity Friars Club members whose pictures adorn the club's walls, like Whoopi Goldberg, Barbara Walters, Billy Crystal, and Frank Sinatra.

Dr. Judy hailed the diplomatic skills of the UN Ambassador of Kenya Macharia Kamau when co-chairing the negotiations, and also highlighted his good humor, for example, when he called out distracted delegates saying, "I know you are more anxious about the outcome of the World Cup today." Also, he often thanked UN Ambassador of Palau Caleb Otto for caring about his "mental health and well-being" - which H.E. Otto had successfully gotten included in the agenda for the first time, in partnership with Dr. Judy in her role as Chair of the Psychology Coalition of NGOs at the UN.

H.E. Kamau predicted that the goals "are going to make this world a radically different place." 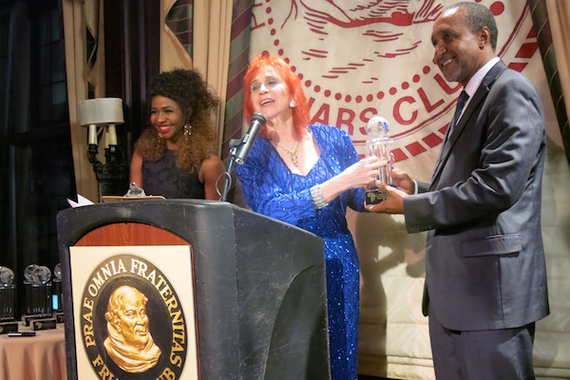 It made such sense to me that the UN Ambassador of Ireland David Donoghue did such a stellar job as co-chair of the negotiations, given his 17-year history working on the challenges of the Anglo-Irish Agreement and the Good Friday Agreement. He was also Ambassador to the Russian Federation. 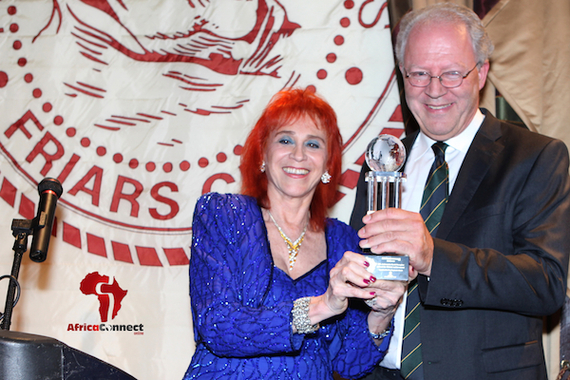 The event celebrated the launch of www.africaconnectonline.com, a new Internet-based information network to tell positive stories about Africa and the Diaspora that other media do not cover. I found it charming that to open her speech, C.E.O. Omon Dede did a dance on stage.

Then things got intensely serious as she described her journey, growing up poor in Nigeria, being horribly raped, and then being detained for months when she arrived in America--which made her feel so alone she was suicidal. Now, she intends to help other young girls not feel the same way. 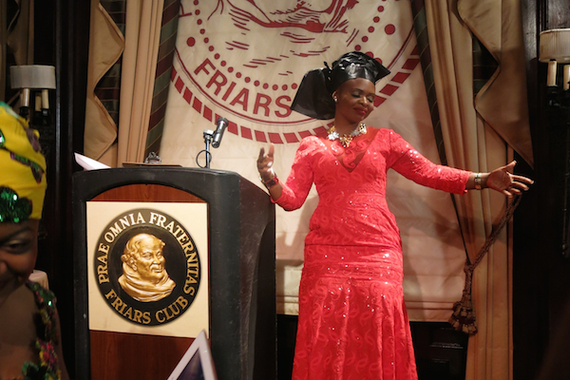 Since I am such an advocate of men's and women's rights, I was impressed with the speech of the UN Ambassador of Suriname, Henry MacDonald, co-convener of the event and advisor to AfricaConnectOnline. His described his recent "Barbershop Conference" at the UN, explaining how the barbershop is a place where men talk about three topics: sports, politics and women. His message is that men have to change their negative stereotypes about women- and about themselves.

"We have to invest in the brain power of Africa, in its boys and men but also girls and women," he said. 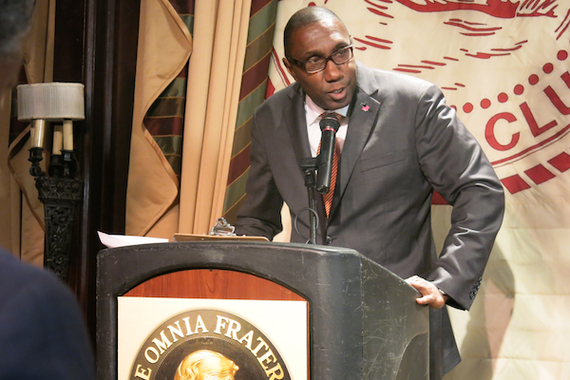 Reference to the brain was a perfect lead-in to the joke Dr. Judy told -- in the spirit of the Friars Club -- about the different cost of men's and women's brains. Everyone laughed. We also chuckled to hear Dr. Judy describe that the club was a perfect setting for the occasion - given that one of the Global Goals insures "gender equality and the empowerment of women and girls" and that the Friars was once an exclusively men's club until pressured to admit women. I liked that.

Everyone loved the allusion made by special invited opening speaker, UN Ambassador of the African Union Téte António, when he complimented AfricaConnectOnline for "changing the mindset" about Africa, since "the stories of the lions in Africa will now be told not only by the hunters, but by the lions themselves." 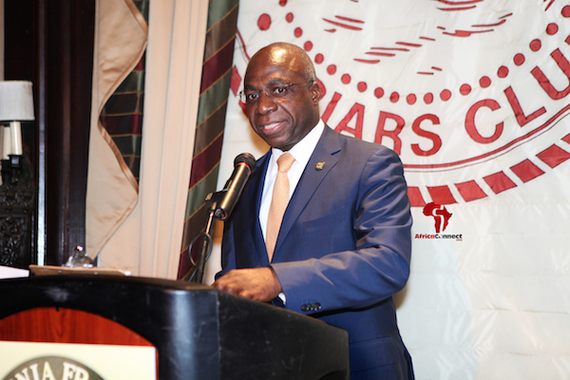 Given that I know Latin, I loved that Hungary's UN Deputy Permanent Representative, Ambassador Zsolt Hetesy, accepting on behalf of Ambassador Csaba Kőrösi who co-chaired the 2014 UN sessions, pointed to the Friars Club logo, explaining that its Latin slogan "Prae Omnia Fraternitas" translates into "before all brotherhood," which is symbolic of "the partnership we are putting together for all mankind." 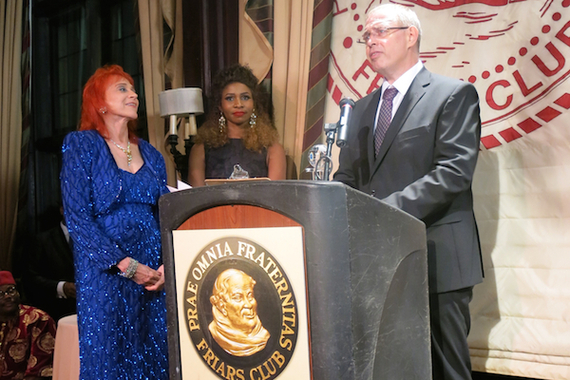 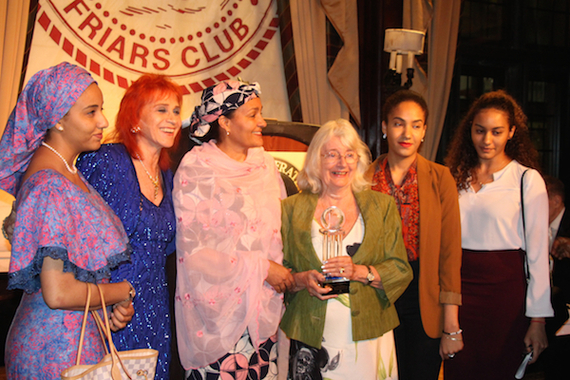 Amina J.Mohammed, Special Advisor to the UN Secretary-General on Post-2015 Development, was the sole female awardee. To the crowd's delight, Dr.Judy -- using her experience as a psychologist and talk show host -- invited Amina's family onstage to say what they thought of Amina. Their answers: "truly amazing," "inspirational," and "the best... she thinks about everyone."

With high energy and passion, Thomas Gass, Assistant Secretary-General in the UN Department of Social and Economic Affairs (DESA), acknowledged those who fought so hard for the inclusion of various targets, like mental health (dear to Dr. Judy's heart) and human rights. 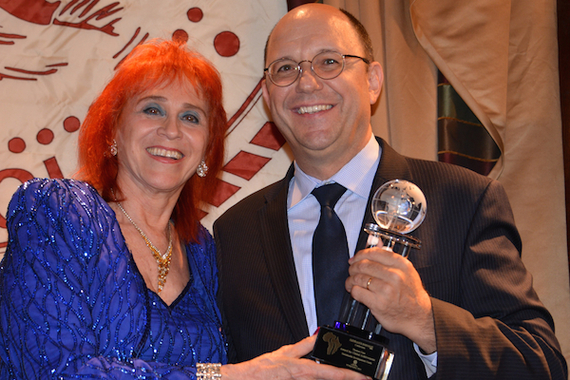 But more needs to be done. I was moved when he asked, "Can you imagine forty million people still do not have a legal identity?... So they can't have a driver's license, travel, inherit anything, or pass on anything to their children."

More humor prevailed when Nikhil Chandavakar, communications chief in the Division of Sustainable Development of DESA, accepted for the Secretariat of the Global Goals proceedings, Nikhil Seth, pointing out how since they both have the same first name, maybe he would keep the attractive award!

All the awardees had impressive world experience. For example, President of the General Assembly, Sam Kutesa, played a role in the stabilization and peace processes in troubled regions like the Democratic Republic of the Congo, South Sudan, and Somalia.

Given all my experience using arts in humanitarian projects all over the world, I enjoyed meeting distinguished attendees like Ambassador Angelo Toriello, UN Deputy Permanent Representative of Sao Tome and Principe. Through his Humanicy project that promotes humanity in diplomacy, he has hosted events at the UN like a major Ebola Relief Concert last March to encourage ongoing attention to the epidemic. 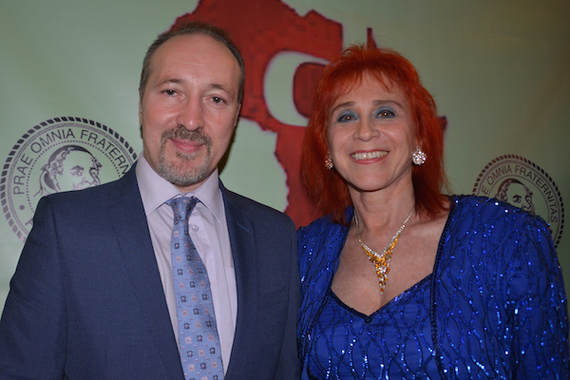 There are a few small developing countries I would like to know more about, especially after meeting their UN Ambassadors, like Jean-Francis Zinsou, from Benin, who told me, "The event was inspiring to honor heroes who devoted so much energy and brains to define the future we want for all humanity." His son Joel is Dr. Judy's "right arm" assistant at the UN. It is youth like him who are going to inherit the benefits of the next 15 years of the new Global Goals. 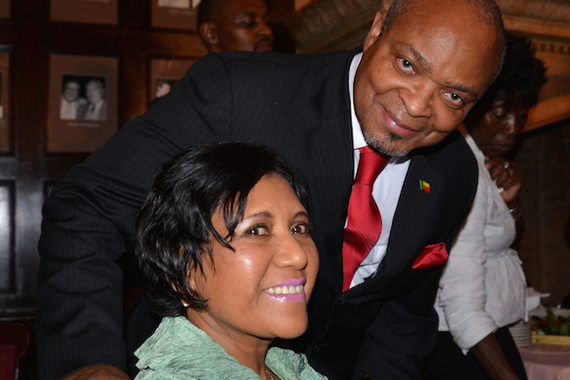 I know the power of music, so it was inspiring that the event opened with a song -- relevant to the global goal of maternal and child health -- called "Every Woman Every Child" that celebrates the UN Secretary General's campaign of the same name. It was written by Dr. Judy with my good friend, Russell Daisey, an internationally known composer and pianist who do workshops together around the world, including in two of my favorite counties of Japan and Haiti where I also have done humanitarian projects.

The singer was 17-year old Sheimyrah Mighty, who brought the house down with her powerful voice. 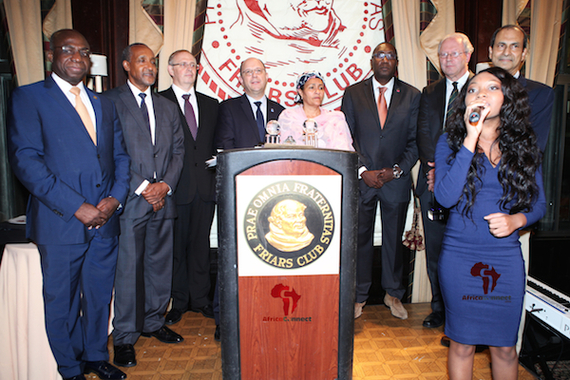 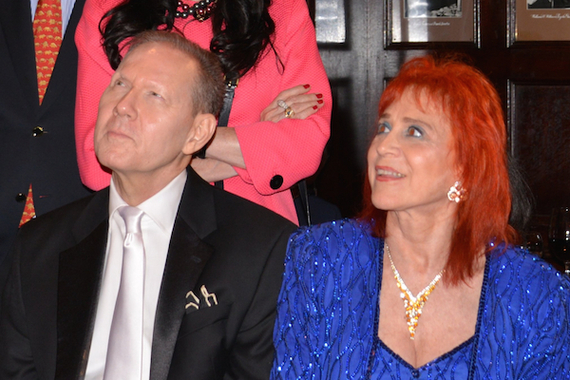 Sheimyrah closed the ceremony by singing "the Impossible Dream," since it evoked the evening's theme to reach for the dream of a better world. 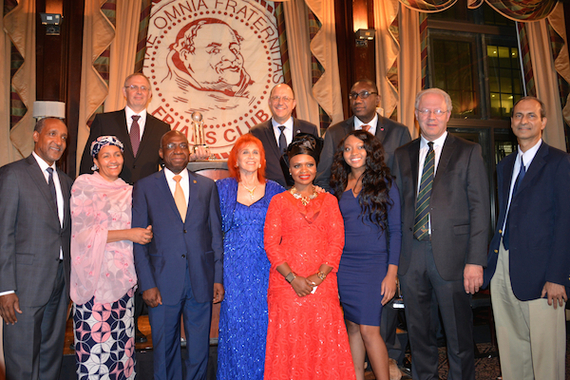 All the awardees and speakers with Dr. Judy, Omon Dede and Sheimyrah Mighty.Photo: SocietyDiplomaticReview/Gloria Starr Kins.

Spending an elegant evening at the Friar's Club with 150 dignitaries was wonderful, but watching Dr. Judy Kuriansky perform so flawlessly as Master of Ceremony was truly an inspiration. Dr. Judy, mental health expert and leader of civil society, is a thought leader and global citizen par excellence.