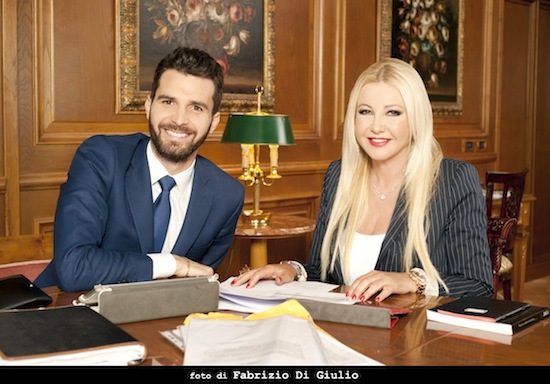 I'm always pleasantly surprised when I sit down to interview a powerful, beautiful, intelligent woman who is not afraid to mix her wisdom with her femininity. And even more amazed when she's accompanied by a man, a partner confident enough to be by her side.

That was the case, a refreshing case of "luck by chance" in Cannes, when I sat down with Lady Monika Bacardi and her producing partner Andrea Iervolino. Together, they form the power behind AMBI Pictures, an emerging production and distribution company in world cinema, but one already tried, tested and established for Italian movies.

Bacardi is that rare combination of brain, beauty and experience that reminds me it's OK to be a strong woman, even if people will be intimidated, friends could be jealous and men will feel threatened. Well, you know, those men, the ones we wouldn't want around anyway. But one true man, the kind feeling perfectly at ease around a powerful woman is Iervolino, who not only basks in her glow quite comfortably, but has, at his young age, more than 10 years of experience in the film world to bring to the table. Their interaction, at the AMBI office on the Croisette in Cannes, left me feeling relaxed and informed. It was a highlight of my festival.

Bacardi and Iervolino arrived to meet me midday, she in a beautiful red skirt look that enhanced her grace and long golden hair, he in a perfectly tailored suit that made him look dashing but also older, wiser than his years. As soon as we sat down, and began talking in Italian, which turned out to be the easiest way to include all in the conversation and get the full messages across, I felt at ease. I didn't want the afternoon to end and I felt as if I could ask any question, knowing I would like the answer.

Perhaps the biggest bond between the three of us was our common kind of life lived in a global world, where one is never really at home anywhere, yet feels comfortable everywhere. Bacardi said of Iervolino "he's got a lot of experience, even though he's 27, he started in this business at age 15, and he's a hard worker -- I have loads of respect for him," and Iervolino jokingly added, "I'm really young, and until a year ago, I was really just very Italian, Monika instead is an international woman, she knows all the countries in the world; I'm trying to become like that." 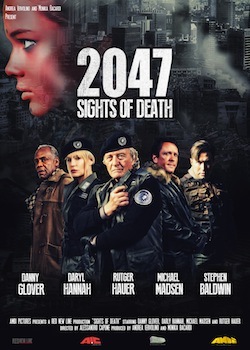 On June 13th, AMBI's first major international project 2047 Sights of Death premieres in Toronto, at the TIFF Bell Lightbox, part of the 3rd Italian Contemporary Film Festival. The film stars personal favorite Danny Glover, along with Daryl Hannah, Rutger Hauer, Michael Madsen and Stephen Baldwin, under the direction of Alessandro Capone. While at first the film may appear to be a wondrous futuristic big screen action thriller a-la TV's Revolution, upon closer look its themes fit perfectly into the socially conscious agenda of Bacardi and Iervolino. In fact, Bacardi pointed to the fact that as human beings, "we are more and more ruled by centralized governments, and we are all a bit afraid of the future, even without entering into a detailed political discussion" -- the fictional "Confederate Central Government" is at the center of 2047 Sights of Death -- and then Iervolino poignantly added, "we try to send a positive, free message through our films, we're not trying to start a political revolution." Of course, as a cultural revolution, or rather change through education is always the better way to go.

Among some of the topics we discussed in Cannes was the new, at times baffling formula for film distribution, which Iervolino confirmed, "while in the past the classical format for a new film was a theatrical release, then the DVD, then pay-per-view and a few TV channels, which of course left little room for lesser known, yet talented filmmakers," he continued, "today, thanks to the financial crisis, which in our opinion isn't a crisis, rather a readjustment, if a film is good, it can't be stopped; because it can always end up on a TV channel, which have now multiplied and can go according to genres. And of course the internet is free, full of platforms which help the smaller companies." Bacardi wisely added, "it has positive and negative sides but the most important thing is that you adapt to this new system."

Going back to the topic of social responsibility, how cinema can help change the world for the better, Bacardi was very passionate on the subject. Most of the films in AMBI's upcoming line-up contain a conscious message, from Hope Lost which deals with the trafficking of foreign women in Italy, sold into prostitution and even snuff movies, to The Humbling, starring Al Pacino and Greta Gerwig, centering around the issues faced in a younger woman, older man relationship. Bacardi admitted that before Hope Lost she "didn't even know the 'snuff movie' industry existed, these are terrible things!" Iervolino explained further, "we pass these women every day in Rome, on the Prenestina road, and think they're there because they want to be, when instead they are threatened, their families intimidated if they don't prostitute themselves. Even their passports are taken away, so they don't have a choice." And while the movie may have enhanced the stories to make them more cinematic, Bacardi was quick to point out that "it's not exaggerated, if anything we tried to make it more soft."

The secret to their success together lies in a synchronicity which Iervolino described easily, "we can make choices in three minutes; Monika studies a screenplay, I read a story, we can have six or seven scripts on our table, but we find each other in an instant." Bacardi then adding, "we are also great friends."

At the end of this talk I didn't want to end, I asked Iervolino and Bacardi to describe one another in three words. Both couldn't condense it to just three with Iervolino going first, "Monika is a woman who is extraordinarily honest, incredibly intelligent and with a big heart." Bacardi had the last word(s) with, "Andrea is also honest, hard-working and exceptionally intelligent."