If you're a fan of the cult comic Preacher, AMC's long-awaited TV series adaptation will sometimes leave you trying to figure out exactly what's going on.

And what's your point? 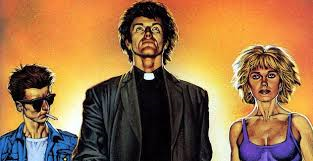 Preacher has had that effect ever since Garth Ennis started writing the multi-book series two decades ago.

The TV series, which executive producers Evan Goldberg and Seth Rogen said this week will premiere in May, does use the basic framework of the book. 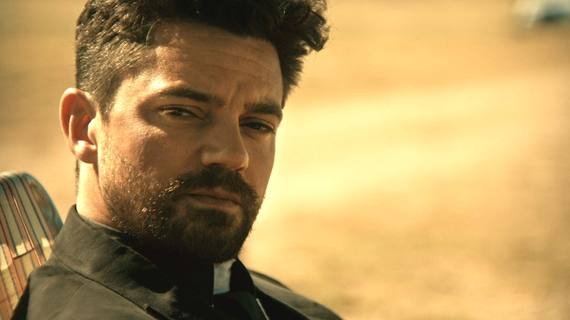 The central character is Jesse Custer (Dominic Cooper) (above), a man with a mysterious, clearly troubled and possibly supernatural past who has returned to Anvil, Texas, to become the pastor of a tiny church that's hanging on by the wispiest of prayers.

His de facto posse is still his ex-girlfriend Tulip (Ruth Negga), a chick with whom no one is advised to mess, and Cassidy (Joseph Gilgun), an Irish vampire whose moral code makes Charlie Sheen look virtuous.

In the comic, they embark on a series of adventures whose general goal might loosely be described as Jesse's quest to find God. Beyond that, any persons who claim they can neatly summarize "what Preacher is about" are fooling themselves.

Each of Ennis's original books introduces imposing adversaries, some with fantastical powers and few loath to employ ultraviolence. Cassidy's ability not to be killed no matter how badly he's pulverized, for instance, comes in handy on many occasions.

Rogen and Goldberg have taken this general foundation and built a show that, judging from an early screening of the first episode, becomes partly Ennis's and partly their own.

Jesse seems more rooted in Anvil, at least at first, than he is in the comic. Rogen and Goldberg have introduced several new Anvil characters, including an apparently normal parishioner named Emily (Lucy Griffiths) who seems to have a quiet thing for Jesse.

That leaves a lot of latitude going forward.

"We want fans who love the comic to get everything they want," Goldberg told TV writers in Pasadena this week. "But also make some new twists and turns."

"We want fans to be surprised and not know what to expect on a weekly basis," said Rogen. "We love the comic and there's tons of stuff in the comic that we hope to include. We also hope to subvert comic lovers' expectations at times."

Showrunner Sam Catlin, whose previous work includes Breaking Bad, said those decisions are tied into the larger challenge of expanding the Preacher audience beyond people who loved the comic book.

"You want it to work on two levels," said Catlin. "There are all sorts of Easter eggs for people who know the comics, so we are very conscious of what the Preacher audience is expecting and the mythology that they know about.

"We want to have that sort of subterranean dialogue with the fans while not confusing people that are just coming to the show for the first time."

Preacher is definitely a challenging project, and Rogen noted that several previous attempts to bring it to the screen have failed - largely, he suggested, because those earlier projects were movies.

"For this type of story with as many characters as it has, as giant a world as it creates," he said, a movie just isn't big enough. He hopes a TV series will be.

One element of the comic that has carried over into the TV series is a wide-ranging tone, where moments of extreme violence can slam into near-slapstick comedy.

In the first episode, all three main characters prove they can wipe out six or eight bad guys using just the materials available in the average back-country bar or airplane lounge.

Cassidy's demolition of several slimeballs includes impaling one of them on a broken liquor bottle. Then at the end of the scene he uses the broken bottle as a spigot from which he draws himself a nice refreshing post-fight glass of blood.

He is, after all, a vampire, although Gilgun (above) takes pains to say he's not your granddaughter's vampire. Don't look for him in any Twilight sequel.

"What's wonderful about Cassidy," said Gilgun, "is he's been around for as long as he has and achieved nothing.

"It's like putting an end to all of this sexy vampire business. He's a traveler, and he's out to move. He gets in trouble here, and then he has to go there. And then he gets in a lot of trouble there. He consistently makes terrible decisions."

Cassidy's keg moment notwithstanding, the violence in the TV series is unlikely to match the extremes Ennis portrayed in the comic, and Rogen said the team TV will assess it on a gore-by-gore basis.

"It's a constant discussion," he said. "There's no formula. Overall we want the show to be watchable and fun and entertaining. We don't want it to be alienating."

For example said Catlin, "We had a very long Talmudic argument about whether or not the guy who ultimately gets the corn cob in his mouth should have his ear bitten off or his nose.

"And we were basically were, like, the nose, that's just disgusting. You can't do the nose. But somehow the ear seemed okay."