If Amelia Earhart were alive today, there is a good chance she would be a NASA astronaut. I say that, not only because of Earhart's noted passion for breaking barriers of possibility in flight, but also for her determination to break barriers of exclusion here on Earth. At a time when women and minorities were rarely seen in the cockpit of an airplane, Amelia Earhart's pioneering achievements broke the silence barrier, inspired a nation and paved the way for so many others who have followed in her path. She holds a special place in our hearts at NASA. It is no secret that the requirement that our earliest astronauts be military test pilots essentially precluded applications from women. It was not until 1983 that Sally Ride became the first American woman in space as part of a Space Shuttle Challenger mission to deploy communications satellites. Since then, there have been 43 NASA women astronauts who have taken that leap and proven, as Amelia Earhart once said, that men and women were equal "in jobs requiring intelligence, coordination, speed, coolness and willpower."

As we celebrate Amelia Earhart Day in recognition of one her greatest accomplishments - the first person to fly solo over the Pacific on January 11, 1935 -- I want to salute the contributions that both she and the field of aeronautics have made to our nation.

While NASA was not officially born until 1958, twenty-one years after Earhart disappeared during her 1937 attempt to become the first woman to fly around the world, she had a connection to the agency. In 1928, the same year that she became the first woman to fly the Atlantic, Amelia Earhart paid a visit to the National Advisory Committee on Aeronautics (NACA) Langley Research Center in Hampton, Virginia for a tour of the facility responsible for so many of the innovations that were on aircraft she flew. NACA became NASA in 1958 and Langley remains an important part of a larger and often overlooked part of the NASA mission portfolio - aeronautics research. While there were probably no other women pilots at Langley in 1928, Earhart very well could have met a number of women researchers who worked there, as NACA was an early incubator for the inclusion of women scientists. Earhart's visit not only demonstrated that women could play leading roles in aeronautics; it also signaled how important NASA innovations and aeronautics research would be to the future of aviation and space flight. 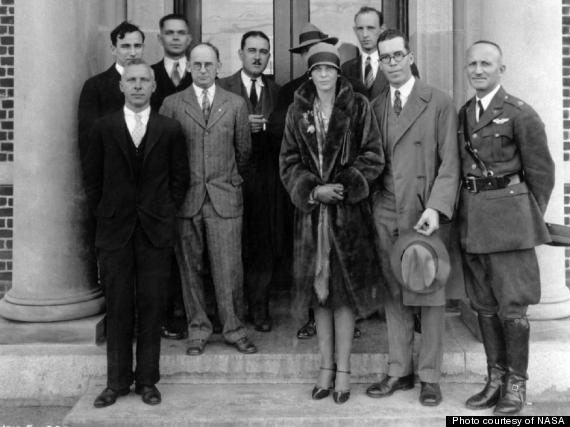 "If Amelia Earhart were alive today, there is a good chance she would be a NASA astronaut."

Today, NASA technologies are aboard all U.S. commercial and military aircraft, and in use in every U.S. air traffic control tower. Every time you step aboard an airplane, there's an excellent chance a piece of innovative NASA technology is flying with you, helping to ensure a safe and efficient flight. It might be found in the upturned winglets you see at the tip of the wing, which help reduce drag and save fuel. Or inside the increasingly fuel-efficient and quiet jet engines slung beneath the wings. It might even be found in the software tools that air traffic controllers use to safely guide flights to their destinations or move them more efficiently through the sky. NASA is continuing to push the envelope of innovation - as Amelia did in her own way - to transform the way we fly, such as making it possible to travel in a commercial aircraft at supersonic speeds or to have higher levels of automation and autonomy across the aviation system. In fact, the acronym "AMELIA" turned out to be the name of an innovative aircraft model recently tested in a NASA wind tunnel.

The spirit and curiosity of Amelia Earhart lives on through the women aeronautics researchers who continue to lead the way. Women working to find solutions to lowering the level of
sonic booms
so that someday commercial planes can fly at supersonic speeds over land. Or working on technologies to improve air traffic flow and reduce delays. Or women designing

These women of NASA are not only making valuable contributions to our aeronautics program, they are an inspiration to others and are helping close the gender gap in the STEM professions.

Amelia Earhart was a pioneering American hero. As we celebrate her life, let us honor her legacy by continuing to break barriers of possibility on Earth and in the sky.

This post is part of a series produced by The Huffington Post to commemorate the 79th anniversary of Amelia Earhart's 1935 record-breaking solo flight, when she became the first person ever to fly from the mainland United States to Hawaii. To see all the posts in the series, click here.