There’s a new effort underway to discover what happened to aviation legend Amelia Earhart, who vanished 82 years ago along with navigator Fred Noonan during an ill-fated attempt to fly around the world.

Explorers Robert Ballard, who found the Titanic and the Bismarck, and Allison Fundis, the chief operating officer for Ocean Exploration Trust, are leading the expedition to find the long-lost Lockheed Model 10-E Electra off Nikumaroro Island in Kiribati. While they search the waters, a National Geographic team plans to scour the island.

But one possible fate might be too horrible to ponder.

National Geographic reported that according to one theory, one or both may have survived a crash landing on a remote Pacific atoll, and after some period of time, died there. Then, they were devoured by crabs ― including massive coconut crabs that can measure 3 feet across from leg to leg ― that dragged their bones into burrows.

This theory could explain why colonists who attempted to settle Nikumaroro Island in Kiribati ― then called Gardner’s Island ― discovered 13 human bones.

British colonial officer Gerard Gallagher, who found the bones in 1940, claimed the rest of the remains had been dragged off by crabs. Tests at the time suggested that the bones didn’t belong to Earhart, but the bones have since been lost, making it impossible to subject them to more modern tests.

If the crab theory was correct, some of those bones could still be there on the island, just scattered and buried.

The International Group for Historic Aircraft Recovery, which has been searching for years for signs of Earhart or her aircraft, posted a video in 2014 of one of the island’s famously giant coconut crabs in its burrow:

The group also did an experiment with a pig carcass to see what would happen to the animal’s body and bones. The crabs ― both coconut crabs and much smaller strawberry crabs ― devoured the flesh in a matter of weeks, but didn’t do much to the bones at first.

However, one land crab was caught on camera dragging a bone, proving they could, in fact, do it:

The crabs didn’t make off with many of the bones during the experiment itself. But a year later, more bones had been dragged away, presumably by crabs. Some were taken as much as 60 feet from the carcass and others never found at all, National Geographic reported.

Could crabs move most of a human body or two over the space of a few years? That’s still to be determined, although Gizmodo threw some cold water on the theory in 2014.

“We can’t find any documented accounts of them actually taking things and leaving with them,” Richard Gillespie, the International Group for Historic Aircraft Recovery’s executive director, told the website, adding:

“All this evidence points to something weird happened on this island,” he added.

The results of the latest expedition will air on National Geographic Channel in October. 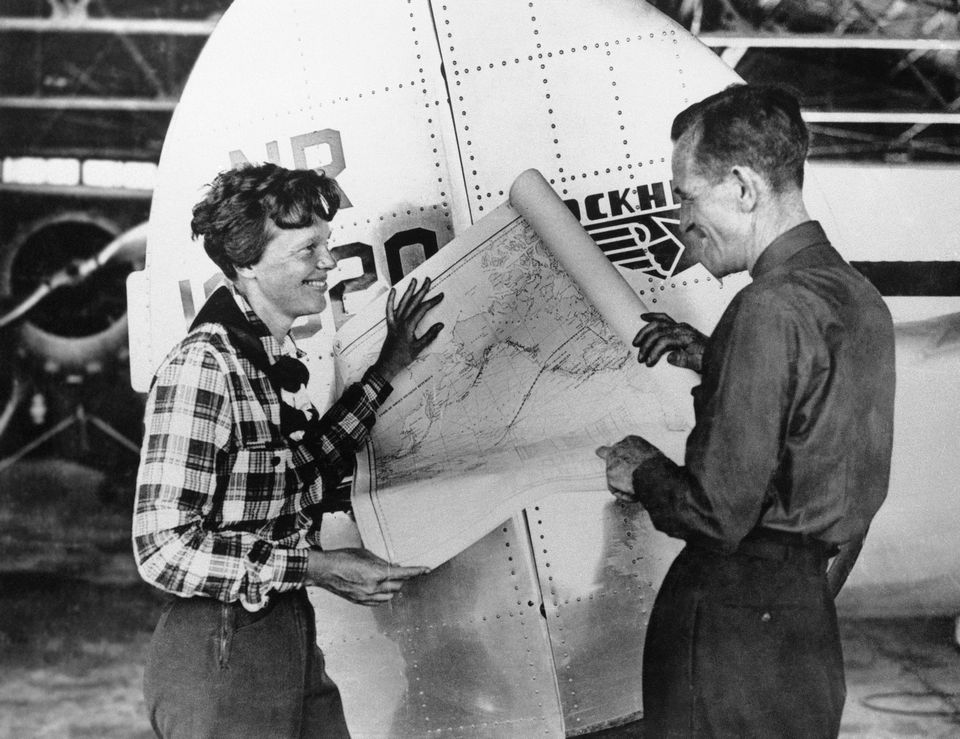 1 / 18
Amelia Earhart, Fred Noonan
FILE - In this undated photo, Amelia Earhart, left, and navigator Fred Noonan pose with a map of the Pacific showing route of their last flight in this undated photo. A $2.2 million expedition that hoped to find wreckage from famed aviator Amelia Earhart's final flight is on its way back to Hawaii without the dramatic, conclusive plane images searchers were hoping to attain. But the group leading the search, The International Group for Historic Aircraft Recovery, still believes Earhart and her navigator crashed onto a reef off a remote island in the Pacific Ocean 75 years ago this month, its president told The Associated Press on Monday, July 23, 2012. (AP Photo, File)
AP