After decades of looking, researchers say they may finally have found a bit of wreckage from Amelia Earhart's plane.

The aluminum fragment was recovered in 1991 on Nikumaroro, an uninhabited island in the Pacific Ocean about 2,000 miles southwest of Hawaii. Some believe Earhart and her navigator, Fred Noonan, lived there as castaways after being forced to land during their 1937 attempt to circumnavigate the globe.

“This is the first time an artifact found on Nikumaroro has been shown to have a direct link to Amelia Earhart,” Ric Gillespie, executive director of The International Group for Historic Aircraft Recovery (TIGHAR), the non-profit group that made the identification, told Discovery News. 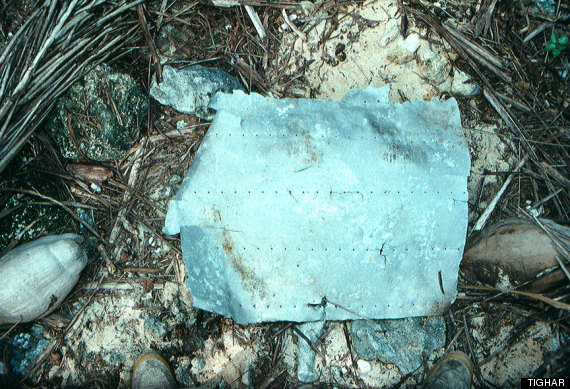 The aluminum fragment found on Nikumaroro, which may be a piece from Amelia Earhart's plane.

Researchers initially had little interest in the piece because its size and shape didn't seem to match any part of Earhart's Lockheed Electra aircraft.

But earlier this year, Gillespie and his colleagues spotted a shiny patch near the tail of Earhart's aircraft in a photo taken in Miami shortly before she took off on her second try at flying around the world on July 1, 1937. According to TIGHAR, the patch was placed where a window had been, an "expedient field modification," before her plane disappeared over the Pacific on July 2.

After an exhaustive re-analysis of the patch's size, shape, and rivet hole patterns, the TIGHAR researchers decided it was a match.

"The patch was as unique to her particular aircraft as a fingerprint is to an individual," the researchers said in a written statement. "Research has now shown that a section of aircraft aluminum TIGHAR found on Nikumaroro in 1991 matches that fingerprint in many respects."

What do other scientists make of the claim?

"It seems plausible," Dr. Les Kaufman, a Boston University biology professor who has spoken as an expert witness about wreckage linked to Earhart. "I have been impressed with Ric Gillespie, who seems to me to be an honest broker, a knowledgable enthusiast, and generally cautious in drawing conclusions based upon limited evidence."

TIGHAR has conducted a series of expeditions to Nikumaroro, where researchers have discovered several artifacts they believe may be linked to Earhart: a jar of anti-freckle cream, a woman's compact, and buttons and a zipper from a flight jacket.

In 2013, sonar data revealed a strange 22-foot-long object under 600 feet of water near the remote island. At the time, TIGHAR speculated that the object was a piece of the Electra's fuselage.

The research group hopes to return to the area around Nikumaroro in June for a closer look at the sonar anomaly and to search for other potential relics.

Memories Of The Historic Titanic