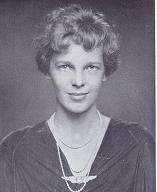 Pictured: A beautiful and seldom seen photo of Amelia from a poster for her lecture tour. Her aviator pin, pearls and open collar look contemporary.

Recently, I saw the movie Amelia with Hillary Swank. I had read and studied a lot about Earhart in college, but one fact I never knew was that she was one of the first celebrities to endorse and market a fashion line. (Gioia Diliberto has written a wonderful article about Amelia as the first celebrity designer.)

In 1934, Amelia created a line of fashions known as “Amelia Earhart Fashions.” The line was sold at Macy’s in New York and Marshall Fields’ in Chicago. The movie Amelia only briefly touches on the products that she endorsed in order to finance her flying expeditions. The movie shows her modeling and promoting her fashions and a luggage line. After seeing the movie, I was keen to learn more about Amelia’s involvement with fashion during the 1930s. Most of the well-known pictures of Amelia that I had seen showed her dressed in her aviator attire. Remember the famous Gap advertising campaign, showing Amelia in her bomber jacket and khaki pants in the 1990s? The commonly known picture of Amelia is one of aviator goggles perched on top of a leather flying cap on her head, a scarf at her neck blowing in the wind wearing her trademark leather bomber jacket. So I was surprised to learn, that Amelia designed some stylish suits and dresses, and that these were staples of her 1934 fashion line. My desire to learn more about Amelia and her flight of fashion fancy, lead me to uncover some lesser known facts about her life.

Amelia studied sewing as a young girl growing up in Kansas. She didn’t play with dolls like other girls did. But she did design and make beautiful clothing for her dolls. Her early career was as a social worker, not as a pilot. As a social worker in Kansas her income was limited, and it seems that making her own clothing was a way for her to remain stylish and live within her means. Later, she carried this knowledge of sewing and design into her career as a pilot. This was part of the genius of Amelia Earhart; she was an excellent promoter of her own brand. Tall, slender and beautiful, she wore clothing as fashionably as a model on a runway. As a pilot, her first foray into design was to create a jumpsuit that she could wear comfortably in the cockpit. She designed a flying suit with loose trousers, a zipper top and big pockets for the Ninety-Nines (an association of women pilots.) This was her typical work attire. But off the runway, Amelia was much more fashion conscious. In the 1930s, she frequently wore the designs of Elsa Schiaparelli. She was always conscious of her image and appeared in fashion spreads in Vogue magazine and Cosmopolitan (where she was also an editor.) It was a natural transition for her to move to creating and designing a fashion line. After seeing the movie, I had assumed that Amelia Earhart merely licensed her name to a manufacturer of clothing and that she was simply the promoter for the line. After digging into her biographical material, her long forgotten press interviews and exhibits at various museums, I was surprised to learn that she was actively involved in her fashion line. She created her line’s samples using her own sewing machine and dress form with the help of a seamstress in New York.

Pictured: The designer at work, Amelia drapping her garment on a dress form.

The original Amelia Earhart clothing line included dresses, blouses, pants, suits, and hats. Eventually, the collection included 25 designs. I have not found any information about the line including a leather bomber jacket, although this is the fashion item most commonly associated with Amelia today.

I also found that Amelia had some original ideas about fashion design for women and fashion merchandising. Here are some of the highlights of her fashion vision:

The most fascinating part of my research was trying to find out if there were any samples of Amelia’s clothing line still available today. I wondered if her designs had vanished as mysteriously as she had. I found the answer less than three hours outside of my hometown of Los Angeles, in the town of Hanford, California. Amelia was a frequent visitor to the west coast and spent time in the small town of Hanford to be close to the Fresno Airport where she gave flying lessons. During that time, she developed a close friendship with one of her students, Mary Packwood. During the course of the friendship, she gave Mary some of her clothing. Mary Packwood preserved one of the dresses and today Amelia’s clothing is on exhibit at the Hanford Carnegie museum in Hanford, California. The exhibit contains one of her original dresses and an original label from her fashion line. Here is a look at the long lost treasures. 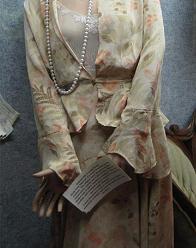 Pictured: The dress Amelia Earhart designed and gave to her friend and flying student Mary Packwood. This dress is in the Hanford Carnegie exhibit today, in Hanford, CA. 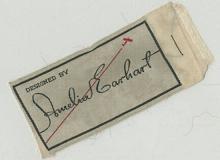 In researching the lost Amelia fashion line, I found a picture of Amelia wearing one her dresses from her fashion label in a history book about the town of Hanford, CA. Below is the picture of Amelia in one of the two piece dresses she designed for her fashion line. Amelia's biographer Susan Bulter notes that Amelia liked simple silk dress and jacket combinations. Comfort was the goal of her designs. Sewing patterns of her designs were sold through the Woman's Home Companion magazine. During her lifetime, her designs were featured in Woman's Home Companion magazine alongside those of French designer Lanvin. Making her designs available as sewing patterns was another way for Amelia to make her designs economically accessible to women during the depression. 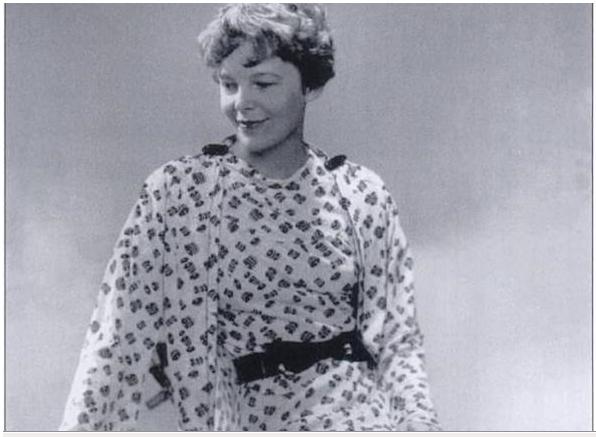 In this picture, you can almost feel the comfort of the garment, and you can see its loose, flowing design. Clearly, Amelia Earhart Fashion was about looking feminine, not just wearing khakis and goggles. Amelia said, "I tried to put the freedom that is in flying into the clothes."

Another replica of an Amelia suit/dress exists in the Amelia Earhart Birthplace Museum in Atchison, Kansas. The suit is displayed alongside pictures of Amelia wearing the garment. 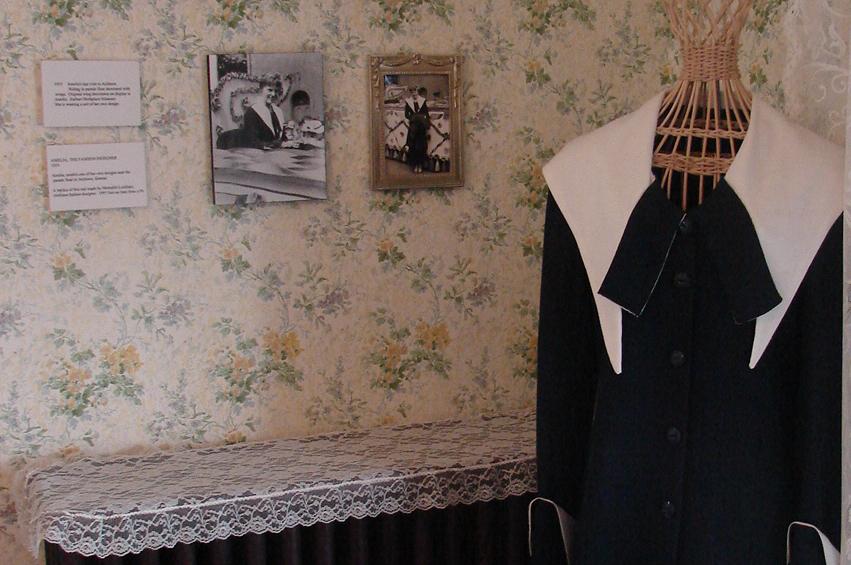 Despite its initial popularity, Amelia Earhart Fashions did not survive. After the original launch at 20 department stores in the United States, the line was not financially successful and folded. Given economic conditions at the times, this was not a surprise. Women no longer had extra income for clothing. After all, fashion, even if designed by an innovator like Amelia Earhart, was not a necessity at a time when many in the US were unemployed and standing in breadlines.

Fortunately, Amelia’s place in American fashion survives and we can see some of her original designs today. The style of her fashion line had little to do with the aviator fashion line created by Jean Paul Gaultier for Hermes. She had a style and elegance that went beyond flight clothing. Her elegant two-piece floral dress in the Hanford museum, with its complimentary strand of pearls, looks like it’s ready to take flight and carry on her dream of affordable, accessible fashion.