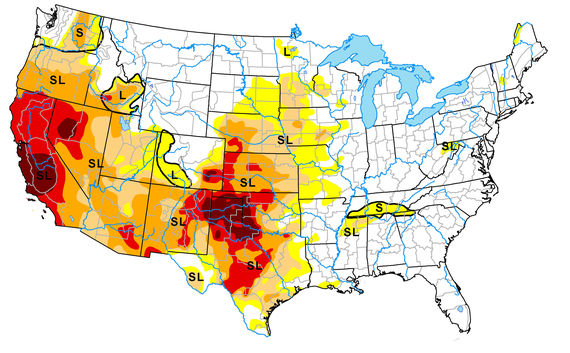 National drought map for the week of April 22, 2014. Map courtesy of NDMC-UNL.

Wichita Falls, Texas, is about to run out of drinking water.

You read that right: out of drinking water.

The north Texas town may not be a metropolis, but it is a community of about 105,000 people, right along the Red River on the Oklahoma border. For the last three-and-a-half years, the city has been living with its driest conditions since 1897.

The drought has taken its toll on the three lakes that supply Wichita Falls with water. They are down by about 75 percent. The city has been aggressively conserving water, but now is working on a plan to turn sewer water into potable water. Yep, from the toilets to the tap.

It is happening largely because rolling droughts are afflicting many parts of Texas and the West. Like Wichita Falls, 17 California cities earlier this year were looking at running out of water. California growers especially have had their supplies cut back from the state. Low levels in Lake Mead, which feeds much of Arizona, could soon force Arizonans to change their water habits.

Tight supplies affect more than people who live in Wichita Falls, California's Central Valley or a city like Phoenix. The lack of sufficient sources can limit our larger economy, too. According to the Wall Street Journal, in an April speech, Federal Reserve Bank of Dallas President Richard Fisher called water scarcity Texas' biggest potential threat.

Dwindling supplies already are contributing to some rising food prices in the United States.

Ranchers in states like Texas and Colorado had to cull their herds in the exceptionally dry summer of 2011. Since then, fewer beef cattle have gone to market. We love our burgers and steakhouses, so demand has not changed much. In fact, there's even greater demand for our beef products. So, market economics have kicked in and beef prices have risen. The retail cost of fresh beef has hit its highest levels since 1987.

Ranchers are not necessarily benefiting because tight water supplies affect their feed costs. And, clearly, the larger economy will not win over time if food costs spike.

Here's one more example of how economies can run into limits without sufficient water supplies:

The United States' recent energy boom requires ample water supplies. The fracking process, which is driving natural gas production, especially requires water, as well as the smart use of the resource. Water shortages could grind this important revolution down, or force it into greater competition with agricultural producers over shared supplies.

Those are some of the problems. Here, though, are three principles that could guide Americans as they plan for 2025 and beyond:

Think Ahead about Water Supplies

Thinking ahead sounds obvious, but not all states have a serious water planning process. If they have one, the plan may sit on a shelf.

Texas got ahead of the curve in 1997, when then-Gov. George W. Bush and then-Lt. Gov. Bob Bullock passed a regional water planning process. The bipartisan pair's legislation divided the state into 16 regional water groups. Each region was given the task of identifying long-term water supplies and then updating their strategies every five years.

This process is still used today. Importantly, it requires a range of stakeholders to sit at the planning table, from agricultural interests to municipal leaders to environmental activists. Every five years they must sign off on a plan to supply their region with water. The state must approve the strategies, yet local communities drive the process.

Maybe not all states will use this approach, but states need a realistic way to plan for water. The late Bullock often said he pushed for this process because he was tired of seeing Texas' previous water plans sit on shelves.

As states think ahead, they also can benefit from universities with strong expertise in water policy. Their experts can help policymakers work through complicated issues. True, politics always will be part of the water planning process. But water institutes, as one example, can help states focus on core hydrology issues.

Texas' planning process is now under fire from some who think it undermines private property rights. The pushback is especially evident in the parts of West Texas and the Texas Panhandle that depend upon the Ogallala Aquifer.

Board members and staff of groundwater conservation districts are supposed to manage how much water each landowner can use in these agricultural-heavy parts of the state. But some elected trustees of the groundwater districts have lost reelection contests because of their decisions to regulate water use. Some constituents have wanted to use as much water as they like. (In some cases, this pits neighbor against neighbor.)

Of course, private property rights are an extremely important part of our economy and system of law. Farmers especially depend upon enough water for their livelihood. Those who govern aquifers should heed their needs. On the other hand, there are no unlimited property rights. For one thing, the principle of eminent domain limits them.

The trick is finding the right balance between planning and property rights. This will be a challenge as metropolitan areas like Dallas-Fort Worth grow. Part of the water plan for Dallas-Fort Worth, the nation's fourth most populous metropolitan region, includes a new reservoir in Northeast Texas. Some residents in that more rural part of Texas don't want this lake.

The process is now being worked out through the state planning process, which is one more reason that states need processes to handle disputes. None of this balancing will ever be easy or simple, but having the right procedures can help immensely.

Wichita Falls is not the only place thinking about water reuse and conservation. From San Diego to Tucson to Dallas, communities are exploring innovations.

The North Texas Municipal Water District, for example, has a creative program that recycles water from the Trinity River through a wetlands southeast of Dallas. The water then flows back into a major reservoir that feeds suburban Dallas.

Reclaiming seawater from sources like the Gulf of Mexico or recovering brackish water in desert areas like El Paso is also part of the future. (Link to Bloomberg report) California is now planning 15 desalination plants, although desalination is not yet cheap and requires energy to make it work. But taking the brine out of salt water can help supply cities, farms and even energy producers.

Desalination also can cross national boundaries. Water authorities in Nevada, Arizona and California are exploring creating a desalination plant in Baja California that would help Mexico and the U.S. alike with water needs.

In effect, this plant could create a water swap. By helping create this plant, an upstream state like Nevada could ensure its use of the Colorado River through providing a new source of water for downstream users in California and Baja California. (Mexico is guaranteed a portion of the Colorado River, too.) A desalination plant would create less need for downstream users in California and Mexico to draw from the river.

One part of the reuse/conservation equation that needs further work is developing reliable underground storage of water. Then, communities can better capture storm flows and runoffs. "If you could take water out of a treatment plant and store it for later recovery, you could eliminate a 50 percent evaporation rate," explains Bill Mullican, former head of water planning for the Texas Water Development Board.

To be clear, there's a trap in conservation. The more communities conserve water, the less fat they have to cut from their supplies in exceptionally dry times.

Yet conservation, including simple measures like more of us using low-flow shower heads, is a must as we look to the future. And looking ahead is exactly what needs to happen. So go our water supplies, so goes our economy and the America we are headed into over the next decade.

William McKenzie is editorial director of the George W. Bush Institute in Dallas

The U.S. Drought Monitor is jointly produced by the National Drought Mitigation Center at the University of Nebraska-Lincoln, the United States Department of Agriculture, and the National Oceanic and Atmospheric Administration. Map courtesy of NDMC-UNL.