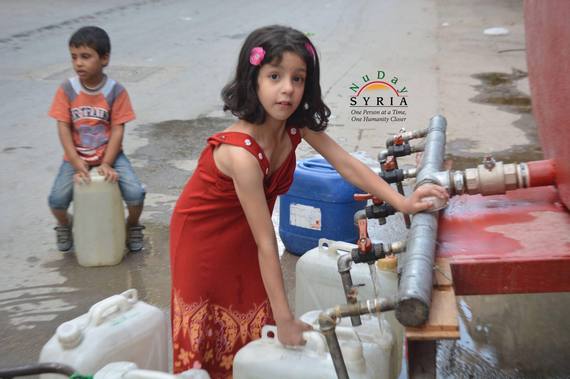 We are all in this together.

Life as we know it can no longer be the same, as we see the humanitarian catastrophes currently happening in Syria: families losing their homes, livelihoods, relatives and life as they used to know it.

With the start of the Syrian Revolution, it was obvious to the world that the Syrian people's requests for freedom and dignity were human - and that spurred in me an indescribable need to share their message with my fellow Americans. More than just sympathy, I yearned to support fellow mothers and fathers in Syria, who were finding themselves unable to provide food and shelter for their children.

I used to be scorned by the occasional Syrian-American, told that events unfolding in Syria had nothing to do with me. That being only part Syrian, with no intention of leaving my beloved new home country America for anywhere else in the world meant that my work didn't matter. The comments only made me laugh, because if you believe in humanity, then you believe in all of humanity - not just particular groups of people.

Every single day, my work to help Syrian mothers and children is a tangible reaffirmation of the goodness we find - in all people. I have the privilege of dealing daily with Americans of all socioeconomic and ethnic backgrounds, as well as faiths. It's a joy and an honor to be a facilitator of empowerment and aid between groups of people, who otherwise might not ever get to know each other.

There is no doubt in my mind that every person that has ever donated $10 or given a teddy bear for a Syrian child in need never will participate in hateful or fear-mongering rhetoric. On the contrary, what I see is that people go back to their youth groups, churches, and synagogues, returning with organized fundraisers and collections, donations, and a deep-rooted enthusiasm to do more. People believe in building bridges and reaching out. This is the drive behind One Humanity Closer - and it's the drive that keeps me going.