Yesterday OffTheBus spoke with William K. Wolfrum, an American sports writer (BadGolfer.com) and humorist currently living in Uberlandia, Minas Gerais, Brazil. The country's infamous, unequal distribution of wealth is something that can catch an American off guard. On the other hand, Brazil proudly shrunk its income gap by six percentage points since 2001, more than any other country in South America. New oil discoveries will likely thrust Brazil into the ranks of the global petro-powers within the next decade.

Wolfrum's far-flung writing career began in Alaska, where he won a number of Alaska Press Club awards for his columns. Wolfrum urged OffTheBus to mention these Alaskan credentials as a way to get Republicans to show him the love and respect he deserves, since Sarah Palin's experience in Alaska makes her worthy of being president. 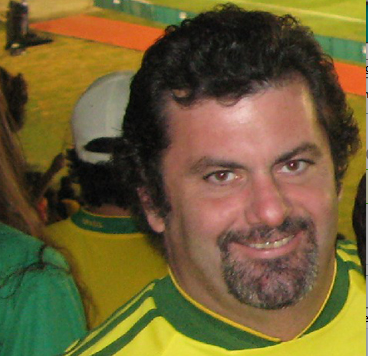 Why are you insisting America can't afford to elect another American as president?

William K. Wolfrum: It is my opinion that at this point in history, having an actual American win the U.S. presidency would be national suicide. Americans have become increasingly incompetent as leaders, extending to the apex of incompetence -- George W. Bush. While perhaps a Barack Obama or a John McCain presidency would give the appearance of improvement, in the end I'm afraid their innate Americanism might lead them to make foolish decisions.

Why do you think Americans have become such inept global leaders?

Americans are hamstrung by three factors. First is their inability to refer to the U.S. as anything
other than "The Greatest Country in the World." Second is their firm belief that diplomacy can only be conducted with cruise missiles and tanks. Third is their complete ignorance of world history.

Was this always the case?

Great Americans such as George Washington, John Adams, and Thomas Jefferson helped create a nation that was a grand experiment of democracy and freedom. But they weren't Americans, per se. They were "British Americans." Martin Van Buren was the first bona fide American and what is he known for? The Panic of 1837 and the creation of political parties in the U.S., neither of which did anybody any good, whatsoever.

You're kinda critical, for a natural-born American...

This is by no means a defamation. Americans have been innovative, generous, and helpful. The original Star Wars movies -- which brought joy to billions worldwide -- were made by Americans and starred Americans, with the exception of the guy who played C3PO and many key members of the evil Galactic Empire.

But politics is not film making. And Americans have increasingly proved inept at running their own country, which has led to a stagnating economy, horribly run wars on multiple fronts, a pro-torture mentality, a failing infrastructure, a dollar that's not even worth a dollar, oil prices that appear to be heading toward four figures rather than back to two, and an onslaught of Adam Sandler and Will Ferrell movies.

One thing is abundantly clear -- the last thing the U.S. needs is another American in the White House. Now don't get me wrong, I'm fully aware that the Constitution makes it clear that only a natural-born citizen is allowed to be president. But as many have said in recent years, the Constitution is not a suicide pact. It's time to get rid of the Naturalization Rule once and for all.

Does this election have any other big issues?

The economy is an important one. Exactly how many Republican administrations do Americans need before they realize they're all the same? Grandiose deficits. Financial compensation to buddies. Attempts to privatize everything except their own colossal business failures.

Republicans also love to use fallacious "slippery-slope" arguments, like if we allow two women to marry each other, next week I'll marry my dog. But in reality, Americans have slipped towards a type of society that's truly frightening. And both Republicans and Democrats have allowed it to happen. The U.S. needs more than change, it's literally dying for some basic critical thinking skills.

How do you feel about a female vice-president?

For me, Palin's gender comes into play only because of McCain's eagerness to exploit it. I don't respect Palin the idealogue, but I say with complete honesty that I hope she can deal with the sexist behavior coming at her from all directions. The first female member of the Executive Branch -- whether it's Hillary Clinton, Sarah Palin, or someone else -- will face blatant and veiled sexism on a non-stop basis.

Several other nations have already opened the door for women, as far as power is concerned. No one looks at Germany's Angela Merkel and thinks, "Poor girl, she needs a shoulder rub." Well, okay, apparently some Americans think that way. But having a woman in a leadership role doesn't make a whit of difference to me. It remains to be seen if Americans are ready to deal with it.

Despite your misgivings about electing an American, will you support Obama or McCain?

I support Barack Obama 96.2 percent. The other 3.8 percent is just jealousy over how cool he looked draining that three-pointer in front of the troops. I'm a petty, petty man.

The modern conservative ideology of the Republican Party has failed in every way. However, knowing Americans as I do, I'm afraid McCain might win. Dedicated Republicans and Democrats will vote their party, so the non-partisan group will decide this election. I just don't trust that race won't play a part in how they vote. I aspire to be proven wrong. I think the U.S. would be missing a huge opportunity by bypassing Obama.