If you're an American, you definitely need to learn these things. Even if you're not, they're pretty cool.

For some reason, the most ridiculous parts of American history often don't get taught in high school. Apparently it's more important to teach the "essential" over the "juicy," so looks like we'll have to do what your U.S. history teachers didn't. Nobody can be blamed for having no idea who the real Uncle Sam is or what eagles actually sound like, but here's your chance to set the record straight.

Despite what "The Colbert Report" and countless others want you to believe, the patriotic "bald eagle screech" is actually a lie. In reality, bald eagles have a much less intense screech and that "piercing, loud cry" is actually another bird entirely. Bird expert Connie Stanger told NPR, “Unfortunately for the bald eagle, it has like a little cackling type of a laugh that’s not really very impressive for the bird." While certainly majestic, the bald eagle's prowess has also been questioned throughout history, with many arguing that its status as a scavenging and thieving raptor make it a poor choice for the national bird.

As a 22-year-old, Lincoln was described as able to "outrun, outlift, outwrestle and throw down any man in Sangamon County," Ill. In one match, the future president reportedly became angered by his opponent's attempt to cheat, so he used his long arms to pick the opponent up by the throat and shake him around. The Wrestling Hall of Fame has only been able to find one recorded wrestling defeat in Honest Abe's 300 matches.

Samuel Wilson was a meatpacker in Troy, N.Y. who fought in the American Revolution and became the official meat inspector for the northern army in the War of 1812. Wilson was well known in Troy for his meat business and for his friendliness and over time was given the nickname, "Uncle Sam." When Wilson started providing and inspecting meat for the troops during the War of 1812, the troops from Troy would joke that the "U.S." label on the meat barrels actually stood for Uncle Sam. This idea was eventually expanded to all United States military items with "U.S." and so Uncle Sam became the figurehead of American might.

The Anheuser-Busch company was passed from father to son for five generations. It was so much a family company that each first-born son was required to taste its beer before anything else, including their mother's milk. More recently Budweiser, or rather the Anheuser-Busch Cos. Inc., was bought by Belgium-based InBev. Nobody has followed up to see if the InBev children will be required to partake in this tradition.

Although this may just be a legend, the story goes that President Taft was attending a baseball game and over the course of the game, became increasingly uncomfortable in his small wooden chair. Taft was a very large man and eventually couldn't take being confined to the small space anymore, so in the seventh inning he stood up to stretch his legs. Thinking that the president was about to leave, the rest of the audience also rose to show respect. Taft eventually sat back down and the audience joined him, thus creating the "Seventh Inning Stretch." At least according to lore.

In that game, Taft also became the first President to throw the ceremonial "first pitch." Last year, the Washington Nationals added Taft to its roster of racing presidents.

The Mall of America, located in Bloomington, Minn. is actually owned by the Triple Five Group, which is based in Edmonton, Canada. The Canadian group also came up with the idea and designed the place, so this was never wholly an American mall, despite the name and embodiment of the American principles of excess and commerce. Canada is, of course, in the continent of North America, so there's that.

The Second Continental Congress in Philadelphia actually voted to approve a resolution of independence on July 2nd and later that day, the Pennsylvania Evening Post published, "This day the Continental Congress declared the United Colonies Free and Independent States.”

July 4th is when the Congress adopted the official Declaration of the Independence, although most people didn't even sign it until around early August. Philadelphia didn't celebrate the declaration until July 8th, the Continental Army didn't find out until the 9th, and England had no idea until August 30th. At the time, John Adams even said, "the Second of July, 1776, will be the most memorable [time] in the history of America."

Although skinny dipping in the Washington D.C. stretch of the Potomac nowadays would be a bad time, both Presidents John Quincy Adams and Theodore Roosevelt loved to do so back in the day. In Roosevelt's own words, "If we swam the Potomac, we usually took off our clothes."

These actually weren't the only presidents that loved swimming naked, as FDR, Kennedy, Johnson and Carter were also reportedly fans.

Morton's Toe is when your second toe is longer than your first "big toe." This was an idealized form in Greek sculpture and that's why The Statue of Liberty has the fairly common condition. 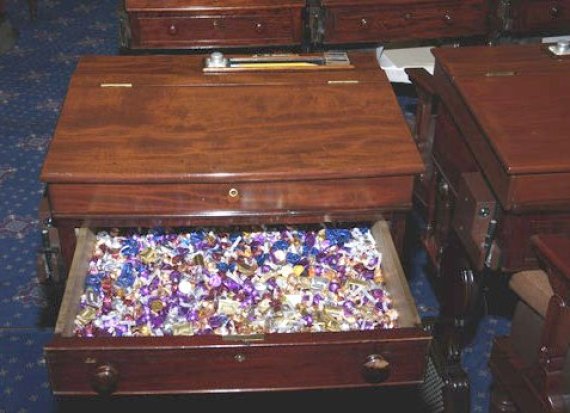 The candy desk is an ongoing tradition that was started in 1968 by California Sen. George Murphy, who would keep his desk full of candy despite a no eating rule on the floor. Since then, the tradition has been continued. Currently it is held by Illinois Sen. Mark Kirk (R), who fills the desk with Illinois candy like Mars bars, Jelly Belly and Wrigley's gum.

Truman's parents couldn't decide on a middle name for little Harry, so they simply chose the letter, "S." This satisfied both of his grandfathers, Anderson Shipp Truman and Solomon Young.

"The Youth's Companion" was a magazine that also supplied American flags to schools across the country near the end of the 19th century. On Sept. 8, 1892 they published the pledge, written by an employee of the mag, to promote nationalism and presumably sell more flags and subscriptions. The pledge ended up taking off across the country, but over the years has undergone a few changes.

Originally the pledge involved a salute modeled after the classic Roman one, which Mussolini and Hitler ended up adopting as well. Obviously that salute was dropped. Also "of the United States of America" was added to make it clear to immigrants that they were pledging to the U.S. "Under God" was added during the Red Scare.

Along with those numbers, all three of the members of Apollo 13 were scouts back in the day, and since 1959, there have been 39 astronauts who were also Eagle Scouts.

It wasn't until 1953 that Ohio congressman George H. Bender brought a bill to the U.S. Congress asking them to retroactively admit his state into the United States of America. Thomas Jefferson had approved the territory more than a century before during his tenure as president, but due to an accidental oversight the state had never been formally admitted. Congress approved Bender's bill and now the "official" day Ohio became a state is March 1, 1803, even if that isn't exactly true.

The popular story goes that many "foreign" sounding last names (often Jewish or Irish) were changed by immigration officers at Ellis Island to be more "American" and easier to pronounce in their new home. This is just a myth. These officers were often immigrants themselves and had no such instructions to offer suggestions for name changes. Nobody has been able to find concrete evidence of a single name being forcefully changed at Ellis Island. This myth comes from the fact that many immigrants actually willingly changed their names before boarding their respective ships to America, where they'd have to fill out a name in the ship log.

The only known name change to officially occur at Ellis Island was actually big news back in the day. Frank Woodhull was born a woman named Mary Johnson, but decided to make a new life for himself in America as a man, so he signed his ship log with the new name. Ellis Island allowed Frank to successfully come into the nation with his new life.

The Wall Street Journal found that the actual amount of time the ball is in play during a televised football game is very, very short, totaling less than Meat Loaf's classic, "I'd Do Anything for Love (But I Won't Do That)". Most of the time is spent with the players standing around (67 minutes), while on average only 3 seconds is spent toward showing the cheerleaders. Still, sometimes there's plenty of action even when the ball isn't in play.

Steve Rogers was born July 4, 1920 (which as noted above probably shouldn't actually be our Independence Day) to Irish immigrants Sarah and Joseph Rogers. He had an Irish Catholic upbringing. According to 2010 Census data, 11.2 percent of the U.S. has an Irish heritage.

The U.S. sent London some real American soil along with a statue of George Washington, so that the president wouldn't have to stand on English soil. The Washington statue stands in the tourist heavy Trafalgar Square.

Technically a state driver's license is not required to compete in NASCAR. In fact, multiple professional racers have had their licenses suspended but have still been able to compete. Kyle Busch had his license suspended for driving 128 mph on a 45 mph street, but was still allowed to race. Back in 2004, Scott Wimmer failed a breathalyzer test, but still competed in the Daytona 500 and other races.

Originally created in 1923, the iconic letters over Hollywood were originally put in place as an advertisement for the burgeoning real estate development below. It was originally only supposed to stay up for half a year. In the first version, the whole word, "Hollywoodland" existed, but the "land" was taken out in 1949 when the city of Los Angeles' park department took over the upkeep.

President Lyndon Johnson referred to his Johnson as "Jumbo" and had a propensity to whip it out in front of colleagues at highly inappropriate times, at least according to today's standards. Johnson was also apparently jealous of Kennedy's reputation as a womanizer and set out to try and top him, having what his male aides referred to as a "harem" of mistresses and female colleagues he'd try -- and sometimes succeed -- to sleep with.

Voters 'Will Walk Barefoot Over Broken Glass' For Me, Boasts Ron DeSantis