You might recall the term "Eurasia" from high school geography classes. The term isn't used much anymore in political discussions in the West, but it should be. That is where the most serious geopolitical action is going to be taking place in the world as we move deeper into the 21st century. The U.S., focused so intently on "containment" of Russia, the so-called Islamic State and China, will be missing the bigger Eurasian strategic picture.

Eurasia is the greatest landmass of the world, embracing Europe and all of Asia -- some of the oldest and greatest centers of human civilization.

So what is Eurasianism? It has meant different things at different periods. A century ago, the Kissingers of the time spun theories about a deep and inevitable strategic clash between seaborne power (U.K./U.S.) and continental/land-based powers (Germany, Russia.) "Eurasia" then meant mostly Europe and western Russia. Indeed, what need was there to talk then about Asia itself? Most of Asia was underdeveloped and lay under the control of the British Empire (India, China) or the French (Indochina) and had no independent will. Japan was the only real "Asian power" -- that ironically developed its own imperial designs, mimicking the West, and thus came to clash with American imperial power in the Pacific.

The more Washington attempts to contain or throttle Eurasianism as a genuine rising force, the greater will be the determination of states to become part of this rising Eurasian world.

Today, of course, all that is different. Eurasia increasingly means "Asia" in which the "Euro" part figures modestly. Furthermore, China has now become the center of Eurasia as the world's second-largest economy. Not surprisingly, China -- like the Muslim world -- projects a decidedly "anti-imperial" bent based on what it sees as its humiliation at the hands of the West (and Japan) during its 200-year eclipse -- during one of its dynastic down cycles. But China is very much back now into a classic "up-cycle" mode of power and influence again and is determined to project its weight and influence. India, too, now is now a rapidly developing power with regional reach. And Japan, while quiescent, still represents formidable economic power, perhaps to be augmented by greater military regional reach.

The significance of the term "Eurasian" has changed a good deal, but it still suggests strategic rivalry. At a time when the U.S. formally declares its intent to militarily dominate the world ("full spectrum dominance" was the official Pentagon doctrine in 2000) the concept of Eurasianism is responding with vigor. And not just in China, but in its new significance for countries like Russia, Iran and even Turkey. It suggests a sense of the eclipse of dominant western power in the face of new Asian power.

It's not all just about military and money. It's also cultural. Russian culture has for two centuries maintained a lively debate about whether Russia belongs to the West, or embodies a distinctly Eurasian (yevraziiskaya) culture that is separate from the West. Eurasianists represent a significant force within Russian strategic and military thinking (although Putin, interestingly, does not fully embrace this worldview.)

The idea is a vague but culturally important one; it grapples with Russian identity. It speaks of a Slavic culture but with deep Eurasian roots even in an old Turkic and Tatar past. Remember that historically it is the modern West that torched Russia twice: witness the invasions of Napoleon and Hitler up to the gates of Moscow. NATO today probes ever more deeply all around the Russian periphery. The Eurasianists are suspicious of, if not hostile to, the West as a permanent threat to "Holy Mother Russia." "Eurasianism" will always lurk just beneath the surface in the Russian strategic worldview.

That is what Russia's new Eurasian Economic Union is all about, a goal to at least economically unite Belarus, the Central Asian states and others into a greater Eurasian economic whole. (Oil-rich Kazakhstan was actually the author of the concept; it will seek to maintain ties with the West, but look at it its place on a world map to see where Kazakhstan's real long-term options lie. Russia may not now be the best economic star to tie one's future to, but it is just one of many Eurasian vehicles out there and they are not mutually exclusive. Options bring greater security.

China is moving in stunningly ambitious directions in creating the new Asian Infrastructure Investment Bank (that 57 states have signed onto including most European states, Canada and Australia -- but conspicuously without Japan so far, or the U.S.) This creates a new Eurasian-focused central banking instrument with strong Chinese influence. China is also projecting massive new transportation networks (the Silk Road Economic Belt and the Maritime Silk Road -- "One Belt, One Road") across Eurasia to China linking China to Europe, the Middle East, Central and South Asia and the Far East by rail, road and sea. China's "Eurasian strategy" is already a burgeoning reality. Yes, suspicions and rivalries exist between Russia and China and India and Japan. But the strong economic and developmental thrust of these proposals differ markedly from the American more "security" focused organization with its worrisome military implications.

Not only has Washington fought these Chinese and Eurasian initiatives unsuccessfully, but it is U.S. policies in particular -- that identify both Russia and China as the presumptive enemy -- that have helped bring Russia and China together on many issues, linked now by shared distrust of U.S. global military ambitions.

Japan, incidentally, before World War II had its own doctrine of "Eurasianism" -- an effort to identify with and stir up Asian peoples and territories against western colonial domination. This strategy could have been quite effective had it not been accompanied by Japan's own brutal military invasions of East Asian countries, destroying the credibility of the Japanese "Greater East Asia Co-Prosperity Sphere ." Today Japan hasn't moved its location; it will still have to deal with the reality of Chinese power in the East. And what Japanese leader would seriously pursue a long range policy of hostility to China in support of a U.S. Pacific strategy that is inherently designed to bottle up China? Especially when China and Japan are huge mutual trading and investment partners?

Iran is keenly interested in balancing against geopolitical pressures from the U.S. and seeks membership in these Russian and Chinese economic development institutions. Iran is a natural "Eurasian " and "Silk Road" power. 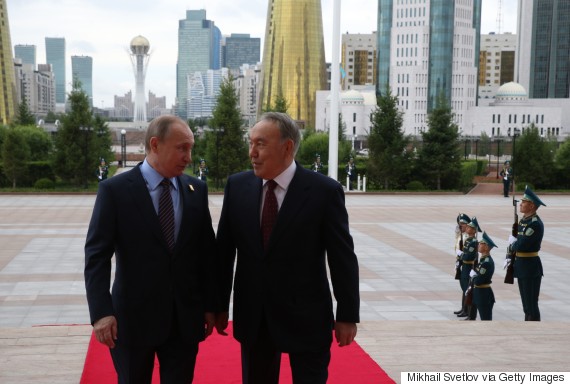 Turkey has gotten into the Eurasian game, again. Going back to the early days of President Recep Tayyip Erdoğan's ruling Justice and Development Party foreign policy -- in the vision of then-foreign minister Davutoğlu -- Turkey was no longer limited to being a western power, but also proclaimed its geopolitical interests (nearly a hundred years after the fall of the Ottoman Empire) in the Middle East, and indeed, Eurasia. (After all, the Turks originally come from Eurasia, having migrated west from Lake Baikal a thousand years ago.) That means serious ties with Russia, combined with deep ethnic, cultural and historical ties with Central Asia, and with China. Turkey (like Iran and Pakistan) seeks to be part of these Russian and Chinese networks. And, among some Turkish nationalist politicians and military officers (including many secular Kemalists) there is strong "Eurasianist" leaning to expand Turkey's geopolitical options to explore strategic and cultural ties with Eurasia. It also reflects an expression of distrust of western and U.S. efforts to dominate the region.

For Turkey this is not an either/or issue. It can seek to be part of Europe -- including NATO -- but will not relinquish the broad geostrategic alternative options to the East, with its ever greater economic clout, and roads and rails to link it.

In short, the new Eurasianism is no longer about 19th century land and sea power. It is an acknowledgment that the era of western --- and especially U.S. -- global dominance is over. Washington can no longer command -- or afford -- a longer-term bid to dominate Eurasia. In economic terms, no state in the region, including Turkey, would be foolish enough to turn its back on this rising "Eurasian" potential that also offers strategic balance and economic options.

The new Eurasianism is no longer about 19th century land and sea power. It is an acknowledgment that the era of western -- and especially U.S. -- global dominance is over.

There are, of course, huge fault lines across Eurasia -- ethnic, economic, strategic and some degree of rivalry. But the more Washington attempts to contain or throttle Eurasianism as a genuine rising force, the greater will be the determination of states to become part of this rising Eurasian world, even while not rejecting the West.

All countries like to have alternatives. They don't like to lie beholden to a single global power that tries to call the shots. America's narrative of what the global order is all about is no longer accepted globally. Furthermore, it is no longer realistic. It would seem short-sighted for Washington to continue focus upon expanding military alliances while most of the rest of the world is looking to greater prosperity and rising regional clout. (China's military expenditures are about one-quarter of U.S. spending.)

This article first appeared on GrahameFuller.com