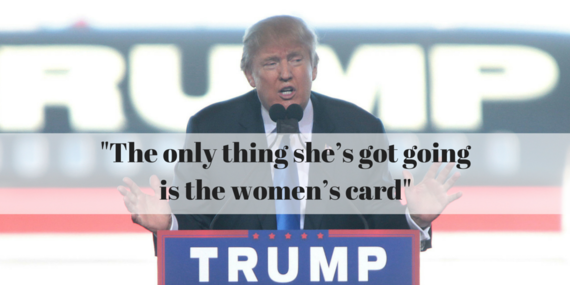 Over the weekend, the New York Times came out with an astonishing piece on Trump's lifelong objectification of women. For decades, women who interacted with him either personally or professionally have endured varying levels of his chauvinism, be it in the form of comments on their bodies, unwelcome sexual advances or pet names like "Hon" or "Dear." Even the women in the piece who recounted that Mr. Trump mentored them or helped them along in their careers noted his casual sexism. Opportunities and assistance came with a constant reminder that they should be thankful he was giving them a chance professionally, even though the workplace, especially executive level positions, is not really a place for women.

The pattern becomes clearer with every new detail we learn about this man. It should come as no surprise to anyone that Trump has resorted to sexism every time his behavior or policies have been criticized by strong, successful women this election season. That's how he's made sure women have stayed in what he believes is their rightful place--beneath him--his entire life.

Recently, Donald Trump accused Hillary Clinton of playing the woman card and declared that if she wasn't a woman, she probably wouldn't even have five percent of the vote. He's blamed her for accusations of misbehavior against her husband and called her an "enabler." And just last week, he released a political ad that shows pictures of Benghazi and other tragedies accompanied by Sec. Clinton cackling like the Wicked Witch in The Wizard of Oz. The sexist undertones are hard to miss.

The Republican party's presumptive nominee for the presidency also found time in his busy schedule to take to Twitter and respond to Sen. Elizabeth Warren's criticism of his policies and behavior by calling her "goofy." Yes, that's right. Elizabeth Warren, former Harvard professor and architect of the Consumer Financial Protection Bureau, is "goofy" to Trump, a man who has argued about the relative size of his manhood during a nationally-televised presidential debate. He even didn't stop there! Over the weekend he referred to Sen. Warren as "Pocahontas" during an interview with the New York Times, which managed to be both sexist and racist in one fell swoop.

Unfortunately, Trump's tired misogynistic tactic isn't working for him this time. The women he's attacked lately don't fear him and won't retreat from his attempts to bully them. With each increasingly outrageous comment, Trump is revealing himself to be an insecure, desperate man, who has nothing to respond to challenges from successful women except flimsy criticisms of their intelligence, character or personal lives. It's evident that the only thing Trump has to offer when called out on his sexist comments is more sexism.

It's unfortunate the men leading the more traditional, conservative wing of the Republican party, including the Never Trump movement, have been unable to stop Trump's bigoted comments and continuous rise. However, I think many of us know why these men haven't been able to stop Donald Trump. This isn't a job for a man. It's a task better suited for a woman.

Hillary Clinton is our best hope for striking down Donald Trump and everything he stands for. The very nature of her historic candidacy, as the first woman likely to secure the presidential nomination from a major party, is a repudiation of Trump's sexism. Sec. Clinton's qualifications and background also represent a rejection of Trump's racism and bigotry. She's spent her entire career fighting for many of our most under-represented populations, including children, people of color and the economically disadvantaged. What's more, she's taken every awful personal assault lobbed at her by Trump and responded to it with strength and intelligence. Her refusal to lower herself to Trump's level represents exactly the type of mature leadership our country needs.

The majority of us who know our country is better than Trump have the opportunity to send a strong message of "no" by supporting Hillary Clinton. We can stop those who think discrimination should be galvanized in our country's identity. We can send the hateful and discriminatory rhetoric that's being thrown around in the Republican Party right now back to where it belongs, in our country's past. And we can set America down an optimistic, inclusive path and build towards the future our children deserve. All we have to do is take a stand. That is why I am issuing a call to action: If you are as outraged as I am by Trump's behavior - start writing letters to the editor; start commenting on blogs; start encouraging the media to call Trump out on his behavior and challenge him with tough questions.

Since we're all going to have to accept this awful man is probably hanging around until November, let's send a strong statement every chance we get.

Andrea Dew Steele is President and Founder of Emerge America, the premier training program for Democratic women. Emerge America is changing the face of American politics by identifying, training and encouraging women to run for office, get elected and to seek higher office. Our intensive, cohort-based six-month training program is unique. As the number of elected Democratic women remains flat or even declines, the need for our work is growing across the country. We currently work in 16 states: Arizona, California, Colorado, Kentucky, Maine, Maryland, Massachusetts, Michigan, Nevada, New Jersey, New Mexico, Oregon, Pennsylvania, Vermont, Virginia, and Wisconsin.