Is GDP really the indicator we should be looking at to compare America with other countries? While GDP might be the best indicator for measuring the health of a country's corporations, profits can be transferred offshore.

We need a better measure for the standard of living within countries themselves. One look at the CIA World Factbook clears up this dilemma.

The number that's tracked in all countries because, unlike GDP, it indicates the health of a country's people by taking into account factors such as pollution and poverty is the infant mortality rate. The U.S. has the highest percentage of infant deaths in the first world. 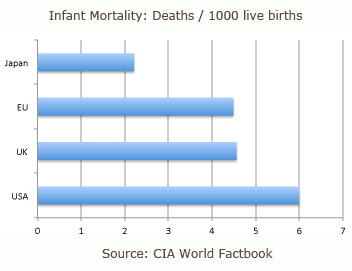 The U.S. health disadvantage cuts across class and race boundaries and exists for all socioeconomic groups, including non-Hispanic whites, according to a brand-new report, "U.S. Health in International Perspective: Shorter Lives, Poorer Health" by a panel of experts in medicine, epidemiology, and demography and other fields in the social sciences.

Even the U.S. elite under age 55 has higher rates of chronic disease, injuries and death, a most interesting factoid from this report comprising data from multiple studies conducted over decades. Assumptions that minorities and those with low incomes or low educational levels were the only ones at risk are unfounded. The report shows that even well-off Americans who do not smoke and are not overweight have inferior health on average than their counterparts in other wealthy countries.

"There is little question that the European welfare model is effective in
redistributing income and reducing poverty," the U.S. Health report states. The panel observes that U.S. spending on social services (13.3 percent of GDP) was less than the OECD average (16.9 percent). Social spending is highly correlated with life expectancy, infant mortality, and potential years of life lost.

Some of the countries with the biggest GDPs have the highest poverty rates: The U.S. topped the list, followed by Japan, according to 2012 OECD publication "StatExtracts: Income Distribution -- Poverty," cited in the U.S. Health report.

The United States has the highest incarceration rate in the world, six times that of China. The U.S. also has had among the highest rates of poverty and child poverty of all rich nations and many less affluent countries since the 1980s, according to the U.S. Health report. Homelessness in the first world is highest in the U.S. and U.K., two western countries with the highest and seventh-highest GDPs.

Many European countries have policies that encourage walking as part of daily life. In 2008, the United States had the highest number of motor vehicles per person: 800 per 1,000, compared with 526 in the United Kingdom, 521 in Sweden, 598 in France, and 554 in Germany, according to a 2012 World Bank study.

The U.S. had the highest firearm ownership, with the number of firearms per 100 people at 88.8 percent. The closest runner-up was Switzerland with 45.7 percent. The report said among 23 OECD countries, 80 percent of all firearm deaths occurred in the United States. United States firearm homicide rates were 20 times higher (43 times higher for those ages 15-24) than in 22 high-income OECD countries.

Advocates of "personal responsibility" often note that people should be free to choose to engage in unhealthy behaviors and bear the consequences, according to the U.S. Health report.

But such choices may not always be made "freely": They are made in a societal and environmental context (Brownell et al., 2010). Parents may want to serve healthy meals but may not be able to do so without nearby retailers that sell fresh produce (Larson et al., 2009). They may want their children to play outside but the neighborhood may be unsafe ... Americans do not make product choices in a vacuum, and they face both environmental supports and barriers to healthy behaviors. Advertising and marketing of tobacco, alcohol, and unhealthy foods; sexualized content in television, film, and musical entertainment; and exposure to violence and stress have known consequences to health ... The education system of the United States ranks 26th on how well its education system meets the needs of a competitive economy.

Although it is arguable whether a "competitive economy" has needs, the report suggests that the U.S. education system also is not meeting the needs of the country's people.

Nowhere is the U.S. number one. Not even on social mobility, which is low in the U.S. relative to other high-income countries.

"Men born into the poorest fifth of families in the United States in 1958 had a higher likelihood of ending up in the bottom fifth of the earnings distribution than did males similarly positioned in five Northern European countries -- 42 percent in the United States, compared to 25 to 30 percent in the other countries," the U.S. Health report says.

U.S. 15-year-olds ranked third-lowest in mathematics and seventh-lowest in reading (just above the OECD average) and science (just below the OECD average), according to the panel's examination of the 2003 PISA data for the 17 peer countries.

Would we fall off the edge of the earth if we produced only enough to live healthy, peaceful lives? After the startling results brought to light in the U.S. Health report, many are questioning whether it is better to strive for high corporate growth at the expense of life expectancy.