After choking down those extra two slices of pie with the homemade whipped cream for Thanksgiving, you are probably thinking that you can get away with at least one more massive ass-attack holiday before some form of corrective action to melt away the malignant flab.

That annual ritual begins with a New Year's Resolution to lose weight - the same one you started last year - but imploded by Valentine's Day. (According to statistics I've read, the average length of a New Year's Resolution is approximately six weeks, so don't feel bad... feel average.) It's easy to become discouraged about a diet once you realize you need to buy 85 new menu items for the diet. Too much hassle, and you're required to make too much change, too soon. That's not going to be the case this year.

As a phenomenal follow up to his New York Times Bestseller the The 4-Hour Work Week, Lifestyle Design mentor and author Timothy Ferriss has created a new playbook to help you take control of your health with an easy-to-implement, and easy-to-stick-to action plan that's not going to require cooking classes at Culinary Institute, nor a credit line from your bank to afford your new menu.

In his new book, The 4-Hour Body: An Uncommon Guide to Rapid Fat-Loss, Incredible Sex, and Becoming Superhuman Ferriss masterfully works along a simple but effective guide rail: a concept he defines as the minimum effective dose (MED).

Borrowed from the ideologies of Italian Economist Vilfredo Pareto and Archimedes, Ferriss delineates how you can have a killer body and fantastic health in the spirit and efficiency of his first book, 4HWW, so you can have a great life and actually LIVE it.

For example, why spend 2 hours at the gym several times per week, when you can get the same or better results in a very focused 80 seconds per muscle group? You need to incorporate the MED in your life plan. Gone are the days of what he calls the "glossy magazine workout plan" of 3-5 sets of 10 repetitions for major body parts.

Ferriss introduces a simple diet called The Slow-Carb Diet... one that is for anyone who needs a simple plan to better your health and one that will yield measurable results quickly. With the speedy results, Ferriss argues you can build much-needed momentum. In seeing your visible results, you will more likely stick with your new life-longevity plan (among them, a new food regimen).

The 4-Hour Body is well-written and his personality and sense of humor run rampant throughout - all for the better.

For Timothy Ferriss, his body is his lab. "Tiny changes were all it took. Tiny changes that, while small in isolation, produced enormous changes when used in combination." To formulate the best hacks so to speak, Ferriss has recorded every workout he's done since the age of 18. He's undergone over 1,000 blood tests. He's had stem cell treatments, and has spent over $250,000 on testing: "my kitchen and bathroom look like an ER." In the process of all this testing, he made himself the guinea pig, as well as the dark horse.

Putting his ideology to work, Ferriss tracked several hundred men and women who used the techniques and data in The 4-Hour Body over a two year period. He's included the results of 194 of them in the book.

The results are pretty amazing. According to Ferriss, many lost over 20 pounds within the first month, and many stated "that it was their first time being able to do so" after several failed attempts. How so? I believe it's in the simplicity of his model. There are five parts to the Slow-Carb Diet, among them Avoid all White Carbohydrates and Don't Drink Calories, but you have to get the book for the full deally in fairness to Ferriss.

Try the techniques in this book before you go under the knife if you've been considering any type of gastric bypass or "band" surgery. You are going to need to change your eating habits either way. Don't kid yourself that you'll be cured after having the surgery.

Schools, gyms, and private trainers should buy this in bulk for their clients and students' families. Why schools? Have you seen the size of some of the kids in your neighborhood grade school? Have you people-watched the last time you were at Disneyland or Universal Studios? America is obese. Do a loving thing for someone you know and buy them this book (and get them off the Wii, the DS, the X-Box, and TV).

Kids need to be outside running like dogs or inside reading books, not playing video games. Obesity is one of the largest problems America faces (besides runaway government). I'm preaching, I know. But it's too easy to buy lots of sh*tty food and send kids to school with it. You can leave comments if you disagree, but you shouldn't show your love for people - nor your dog - with food: it's disgusting. For the exact same price of the Wii Hardware Bundle at Amazon.com, you can hire a tutor and give someone 10 lessons in Hindi or Mandarin. 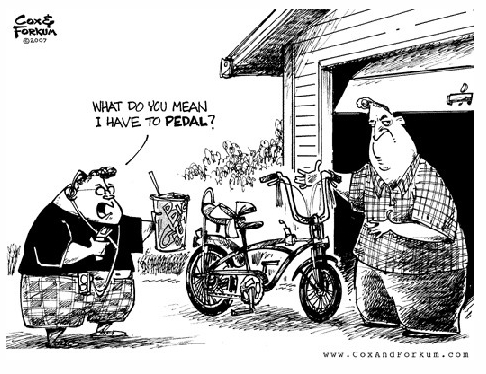 According to the Get America Fit Foundation:

Ferriss knows that big, behavioral changes might be difficult for some at first. He suggests that you might want to start slowly and change one aspect of your diet first, such as breakfast. Then move on to other meals.

Once the diet part of your new health plan is in place, then you can get into the rest of the book and increase your muscle mass, increase your strength, or ascribe to have the sexual prowess of a porn star. (I have these already, but I am giving up half & half in my Major Dickason's Blend and all forms of sugar except on Saturdays - my cheat day). By his own admission, Ferriss specifically states "Do not read this book from start to finish." I took his advice and read the 98 pages that he suggested for the section on Rapid Fat Loss, because IMHO, I think it's the chapter that will resonate with the most people at first. "Most people won't need more than 150 pages to reinvent themselves. Pick one appearance goal and one performance goal to start."

On some level you're already on a diet - you just don't like the results that your current diet has produced - or where those results show up. Spare tires, love-handles, and the back-yard (with the full swing-set and sliding pon) are not Green in the ecological sense. Your weight costs a lot to maintain, both financially and spiritually. You're going to have to want to change...you need the clear intention.

According to a recent WSJ article by Jonah Lehrer entitled The Real Culprit in Overeating, the average adult consumed 4,200 calories on Thanksgiving. Guess what? You can indulge yourself on 5,000 calories on your cheat day every week if you wish.

In fact, Ferriss mandates that you incorporate a Cheat Day. "Paradoxically, because dramatically spiking caloric intake this way once per week, increases fat-loss by ensuring that your metabolic rate doesn't downshift from extended caloric restriction."

So go nuts, and do NOT count calories. However, you will need to have some exercise to replace the dopamine/endorphins that you would generate from eating.

Yes, eating the same thing for breakfast every day may become boring, however, Ferriss argues that you think you have more variation in your current diet than you actually do. I would agree with that statement: I am a creature of habit and I never need a shopping list.

Before you do anything, you must take measurements of your body. Ferriss goes into very specific detail about what to measure and how to do it. If you don't take measurements, you'll never know how much progress you've made. And if you don't know your progress, you won't generate the momentum that you need to stick with the new program. Ultimately: no measurements, no momentum, no diet.

Christmas is on a Saturday this year, so make Saturday your cheat day. You can get the book when it is released on Tuesday, December 14 and begin right away. You can cheat like you're going to the electric chair on Christmas because it falls on your cheat day.