BEIRUT -- It seems it Washington has decided that trying to corner Russia is a bad idea.

Rather than show President Vladimir Putin as a weak paper tiger and as a hopelessly inadequate, flawed model of alternative leadership -- John Kerry has had to warn President Obama that the U.S. has been skirting dangerously close to the possibility of accidental hostilities breaking out with Russia, which would run the risk of becoming real war.

There have been a number of important issues that Moscow has signaled as potential breakpoints to hostilities, yet chosen not to air extensively in the public domain. The first was Turkey's ambush of a Russan jet over Syria. Its operational flight plan had been passed to the Americans, as part of the Russian-U.S. deconfliction procedures. (Also: the downed Russian plane carried no air-to-air missile defense).

Turkey is, of course, both a member of the America-led anti-Islamic State coalition and a NATO member. Putin said explicitly that he had some hard questions to put to his partners about how the Russian jet's flight plan had been treated by the Americans -- and also on Obama's complete lack of criticism for Turkey's action and NATO's unqualified backing for Turkey. 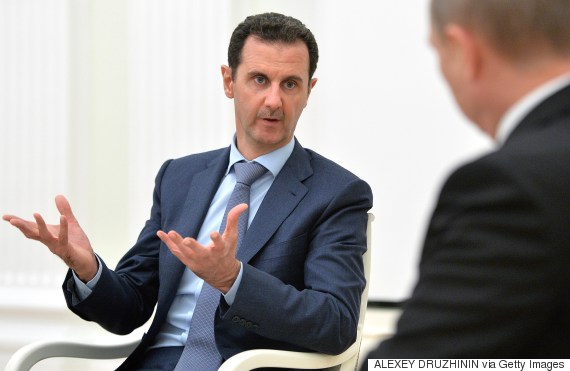 Did this, in some way, imply America was an accomplice to or had green lit the action? Sergey Lavrov has also challenged the U.S. and Turkey on whether the attack on the Russian jet meant that the U.S. and Turkey intended to protect ISIS' oil pipeline through Idlib to Turkey, and also whether they wished to ring-fence what looks like a CIA logistics line run by Turkmen groups through Mount Turkmen in Syria to jihadist forces?

The third hard question for the Americans from the Russians was the air attack on a Syrian army base near Deir ez-Zour, which, apart from killing and wounding four Syrian Army personnel, led to this strategic position being seized by ISIS. America had two aircraft in the vicinity, and Russia acknowledged that they were not involved in the strike. But Russia also asserted that there were other U.S.-led coalition aircraft over Deir ez-Zour at the time and implied that they were responsible for the attack -- and that it was a deliberate act in support of ISIS. Why had America deliberately declined to acknowledge these other coalition aircraft were in the vicinity, Russian officials wanted to know.

We have no account of what transpired in Moscow during Kerry's Tuesday visit, but it is hard to believe that Putin and his team would not have told the Americans bluntly that if matters continued in this fashion, the two powers -- whether inadvertently or not -- would soon be coming head to head militarily, and that the consequences would be grave. That Putin and his colleagues were of this (troubled and angry) state of mind is clear from two formal and public Russian statements made prior to Kerry's visit.

Putin told his military commanders: "Any targets threatening the Russian groups of forces or land infrastructure must be immediately destroyed."

This was followed shortly after by an equally disturbing statement by Putin to the Russian defense ministry board:

"Special attention must be paid to strengthening the combat potential of the strategic nuclear forces and implementing defense space programs. It is necessary, as outlined in our plans, to equip all components of the nuclear triad with new arms."

Any defence ministry would understand immediately: Putin had just placed the nuclear gun on the table. 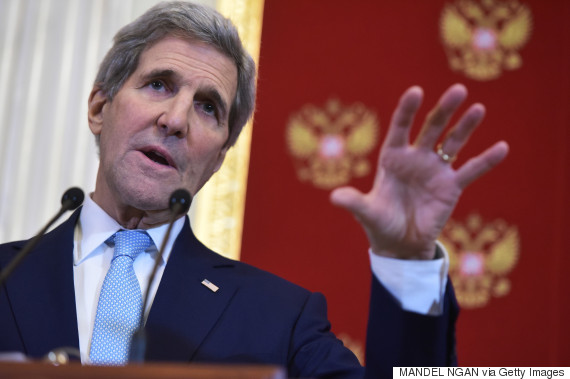 In any event, the White House must have got the message because at Tuesday's press conference in Moscow, Kerry said: "The United States and our partners are not seeking so-called regime change." He added that the focus is no longer "on our differences about what can or cannot be done immediately about Assad."

"In a testament to the fact that mainstream media is beginning to understand just how weak America's negotiating position has become," one leading U.S. financial site noted, the "AP offered the following rather sarcastic assessment: 'President Barack Obama first called on Assad to leave power in the summer of 2011, with "Assad must go" being a consistent rallying cry. Later, American officials allowed that he wouldn't have to resign on "Day One" of a transition. Now, no one can say when Assad might step down.'"

Kerry also called demands by the "moderate" opposition that Assad step down before peace negotiations begin a "nonstarter."

If Kerry's words reflect a genuine shift in the U.S. position, this is very significant. And there is reason to think that there may finally have been an outcome to the longstanding and bitter conflict in Washington between those saying that Assad's ouster was both a necessary and sufficient condition for ending the conflict in Syria, and "those advisers who feel that demanding Assad's ouster is holding back broader efforts to defeat the Islamic State," as Josh Rogin put it. 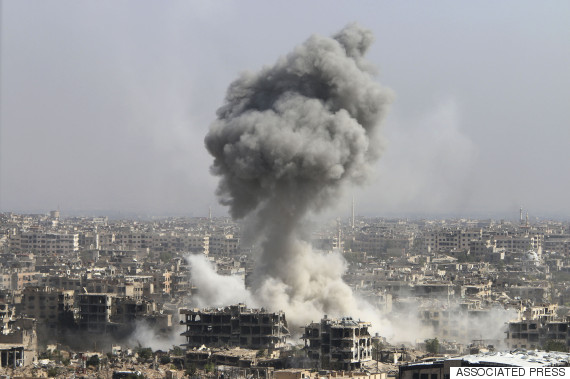 More crucially than the endless chicken and egg argument in Washington over whether or not Assad's departure would puncture the balloon of Wahhabist jihadism is that Washington may be coming to the understanding that neither Russia nor Iran nor Hezbollah believe for one second the U.S. narrative that if Assad stepped down, somehow ISIS would melt away, and that responsible rebels would turn against ISIS to finish them off.

More simply, Russia and Iran will not accept any jihadist victory in Syria. On this point it cannot back down, nor will Moscow let America decapitate the Syrian state. It seems that Kerry has grasped that for America to insist on the "Assad must go" policy simply implies inevitable war with Russia, Iran and Hezbollah. Perhaps it was this which finally persuaded Kerry that the policy must change.

A changed policy it does seem to be. More or less at the same time as Kerry spoke in Moscow, Vice President Joe Biden spoke by telephone with the Iraqi prime minister:

The Vice President noted the recent deployment of Turkish forces into northern Iraq had occurred without the prior consent of the Iraqi government. Both leaders welcomed initial indications of the withdrawal of some Turkish forces and agreed this should continue, reiterating that any foreign forces can only be present in Iraq with the coordination and permission of the Iraqi government. The Vice President reaffirmed the United States' commitment to Iraqi sovereignty and territorial integrity and called on Turkey to do the same by withdrawing any military forces from Iraqi territory that have not been authorized by the Iraqi government.

In short, in a dramatic inversion of the NATO narrative that Turkey's incursion into Iraq was justified, Biden just implied Turkey's action was illegal, and called on Turkey to withdraw from Iraq. Not only that, but the U.S. has been insisting that Iraq close its border with Syria, and there are persistent rumors that Ahrar al-Sham will join Jabhat al-Nusra and ISIS on the terrorist list being drawn up by Jordan.

But if indeed, as Kerry says, America has truly abandoned regime change in Damascus -- then Ahrar al-Sham and al-Nusra being on the terrorist list makes sense. What would be the point of American and European intelligence services firing up these unpredictable, dangerous and brutal movements through their Turkish, Qatari and Saudi allies if Washington now understands that bringing down Assad will not only not help defeat ISIS (but rather the reverse), but also may imply war with Russia and Iran. 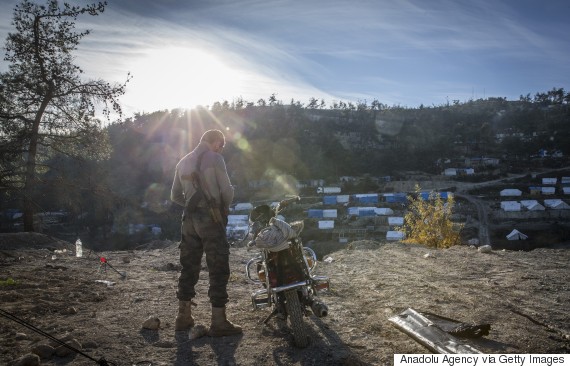 A guard at Yamadi camp near the Bayirbucak district in Lattakia, Syria. (Photo by Emin Sansar/Anadolu Agency/Getty Images)

[It] puts the Saudis and Turks on the spot, as they are the ones who will have to convince the opposition to go along with a negotiating process that sets no timetable for Assad's exit ... [Neither] country [has] much of a choice, since any obstruction will be portrayed as undermining a settlement and aiding the jihadists. That is precisely why the Saudis took the lead in establishing an anti-ISIS Muslim coalition this week.

Equally, the logic of finally coming to the decision that Russia can be a partner in Syria would imply at least a partial rethink of the notion that Putin must be cornered and made to look weak. That, at least, is the logic. But as the doyen of America's Russia specialists, Stephen Cohen, has noted, there is absolutely no support for détente with Russia, either in official Washington or in American think tanks. Cohen remarks that this state of hostility is worse than during the Cold War, when at least there was some support for détente.

Of course, the caveat emptor in all this is that Obama is subject to pressures within the U.S. (and from Gulf lobbyists). He has been able to walk back several attempts to engage America more fully in regime change in Damascus, but this shift will require him to be proactive, to put political capital on the table by persuading Congress to support any political settlement that may emerge. It is one thing to quietly frustrate plans for a no-fly zone through administrative passivity. It is another altogether to go out and campaign for a Syria policy which will see Assad remaining in his palace.