Coca-Cola, Billy Joel, and cops bearing submachine guns: all the things that make America great. If there's anything about this hyper-patriotic combination that makes you nervous, don't worry -- you're probably just not a real American. Luckily for all of us, doomed and damned hipsters drinking rice water in our Tudor-minicastles, all hope is not lost. Hope is here, in all his leathery tangerine glory, right at the foot of our New York doorsteps. The one, the only.

That's right. On Wed. Apr. 6, Donald J. Trump graces the humble 16,000-person post-war suburb of Bethpage with his demagogue greatness. Over 10,000 people fill the 160,000 square-foot floor of Grumman Studios; among them, about a dozen Sarah Lawrence College students studying political science. A fascinating study it is -- but let's not get ahead of ourselves here. If you found yourself with other things to do that night, read on.

Before even officially entering the venue, attendees of the rally are greeted with what looks like an animal pen for dissenters. Seeing that Trump's rallies are privately funded by him, all protestors are asked or forced to keep their pesky free speech where nobody will hear it. Protests to DUMP TRUMP are effectively blocked from view by a surrounding cavalry containing presumably every single member of the Nassau County police force. 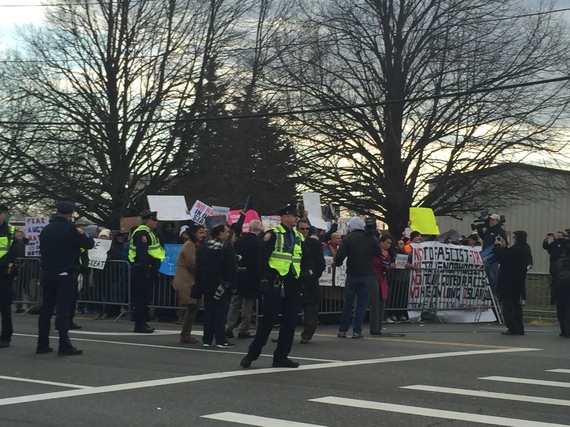 Not pictured: horses, and rally attendees in passing yelling "SOCIALISTS!" as if the word itself is some kind of character insult.

It is really the long walk to the entrance that begins to offer some foreshadowing for the populist paradise that awaits. On my particular trek, I am charmed with surrounding yells by young men to f*** Hillary, f*** Bernie, those f****ing liars, among other elegant vulgarities. On the issue side of things, one attendee walking behind me is terse in justifying his support:

Economically, Trump would save us.

Bags are carefully checked, so unfortunately it is at the TSA security scanner that I am forced to part ways with my overpriced dining hall apple. I mourn the loss of my $2.25 nutrition as I enter the rally, staring into the face of death-by-annihilation as I walk by: 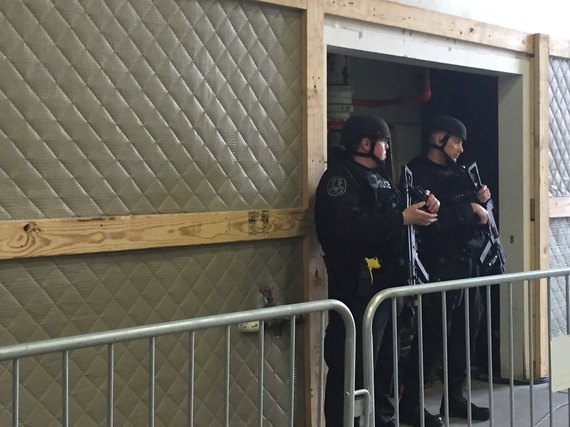 Inside, it hits me: this is America, the beautiful. The sea of red dots promising to MAKE AMERICA GREAT AGAIN, the stretchers rescuing those poor souls who faint from heat exhaustion in the pit, the high fashion of Ed Hardy bedazzled USA apparel -- all of this, existing unapologetically as the lyrics to Billy Joel's "Uptown Girl" play so loudly I can hear my heart beat in my head. 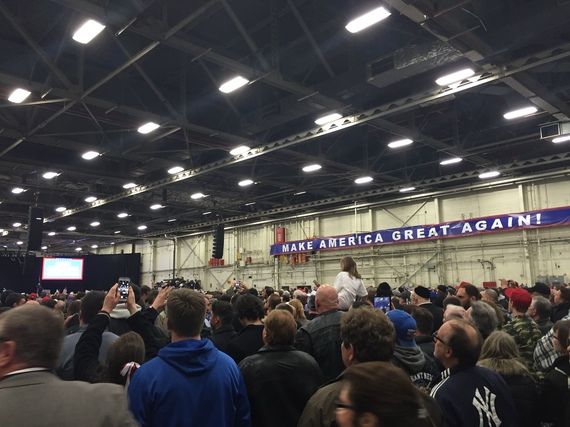 Pretty f***ing weird, right? A man in an army-green jacket asks me as he passes by. So it is -- my attempts at remaining incognito are evidently failed miserably. You can take the immigrant liberal out of Sarah Lawrence, and you can't take the Sarah Lawrence out of the immigrant liberal. My suspicions are later confirmed when an undercover reporter from the Netherlands asks me what I am doing there. Apparently I, and the group of SLC students standing alongside me, do not look at all like the average Trump supporter. She is right, of course -- to say the least, half of our group are people of color, who account for maybe a little less than half of the total POC population at the rally, by the way. That begs the question: what exactly does an average Trump supporter look like?

For all intents and purposes, an average supporter looks and acts like a normal human being. Statistically, they are white, lower-middle-class and uneducated, but I cannot stress enough that if you've ever been to a typical high school suburban football game, you have seen exactly what these people look like. Yes. You talk to them and you laugh with them. Picture this bona fide American setting and there you have the atmosphere of this event. Substitute the anger and intensity of sports rivalry for xenophobia and hate and it makes sense: it's mob mentality or populism -- call it what you want. So comes the patriotism, the harassment, the mindless mechanical chanting.

BUILD A WALL, by the way, sounds terrifyingly like KILL THEM ALL when enough people are shouting it.

The crowd slightly parts to make way for a person being carried out on a stretcher, and it is in this moment, as the familiar upbeat tune of "Uptown Girl" makes its second wave around, that I step back to process the recursive nightmare unfolding before me.

It is a disaster.

To call the gathering a mob of thousands of angry people is not enough. It is the American political system turning on its head. The house of cards is collapsing, and Trump is not collapsing it on his own -- rather, he is leading the way on a bridge to change while his followers set fire to the path behind him. As the French would say -- après moi, le deluge: after me, comes the flood. 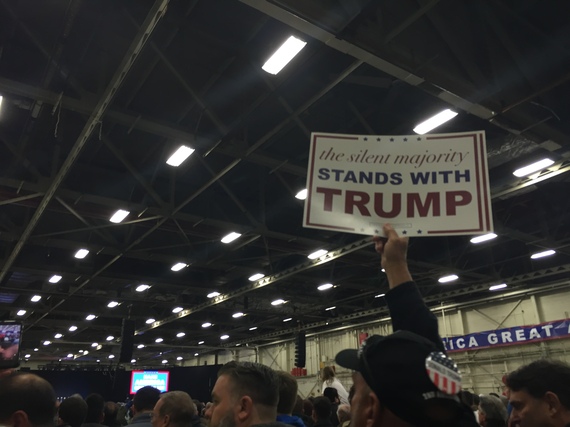 The average Trump voter is not the only Trump voter. An education and a moral compass are not mutually exclusive with a vote for Trump. From the conservative's perspective, the choices are limited. Although the GOP convention may very well produce an entirely different nominee for the general election, as of now voters are suffocating between two men, with a third option whose delegate count is seriously low at this point in the race. Between sensationalist rhetoric and a proven record of being one of the most hated men in Washington, a vote for Trump over Cruz is understandable. The results of Tuesday's primary show that.

At the end of the day, Trump has expressed to the public a stance on seven issues at most, and his constant flip-flopping and denial of words that come directly out of his mouth calls into question just how set those stances are. Cruz, on the other hand, is deliberate and allegiant to an agenda that pushes the fate of the GOP to its right-winged extremes. Cruz is a lawyer; Trump is an entertainer. Cruz is, in his own words, not here to attend the party, but to get you home safe. Trump is, on the other hand, dancing on tables and inviting everybody else to jump up with him.

Congress is in a stalemate and people are suffering. Desperate times call for desperate measures, and with Trump's masterful ability to invoke the mythology of American Providence and exceptionalism, to many he is that last measure. Or so it seems. One need only to look up at the hypnotized crowd staring lovingly, while he delivers a sermon-like speech about the dangers of aliens, to see the severity of this trust. They feel, for the first time in a long time, understood. They are ready and willing to bow down and pledge their allegiance with baseball caps and a vision: Make America great again.