Three and a half decades ago, I chose to come to this country to attend Harvard, then MIT, a journey made possible by perfect test scores and full scholarships. Though my father was a top-flight engineer, our income could never have afforded the astronomical (for Greeks) fees. I was well aware that the US was far from perfect and saw more warts while I lived and traveled here - although, as I tell European friends who ask me how I endure it, I live in Cambridge, not the US. Yet this nation was still a beacon for those of us who were hopeful romantics, who dreamed of achieving and contributing in an accepting meritocracy.

When I first came, the prevailing attitude in the US was that of an engineer. Failure was not an option. Competence and problem solving were gods. The infrastructure was superb, along with the civic attitudes and shared goals that go with such a context. The society was generous, curious, friendly, outward-looking. I encountered other cultures mingling in the not-quite-melting pot, other ways of thinking that I would have never discovered in the homogeneous culture of my birth.

Then came the Republican interregnum, culminating in the eight nightmarish years of the Bush administration. During those years, this country and its people turned into something sickeningly reminiscent of imperial Rome in its dotage. Persons and institutions became incurious, willfully ignorant, sanctimonious, petulant, small-minded, small-hearted, irrational, inhumane. They turned inward, stopped thinking of the future and the world - even as US corporations and armies laid waste to much of it - and concentrated exclusively on narrowly defined individual concerns with an attitude of "I got mine, Jack, and the devil take the rest". Efficiency and acountability gave way to ass-covering policies (from religiosity to convenient memory lapses) and "gotcha" economics; exploration yielded to forms in quintuplicate and small print. Empathy, compassion, finesse, courtesy, eloquence, reasoning, learning became suspect. Plans for great advances in knowledge and social justice dwindled to the tunnel vision of making enough money to escape to a Tyvek Macmansion with a 50-inch plasma TV in a gated community.

The facts around the Challenger explosion of January 1986 illustrate the beginning of the mindset that led to what we have become now. The launch didn't serve science but politics: it was meant to serve as a triumphal exclamation point to Reagan's state of address; the civilian in the mission was deliberately chosen for mediocrity and in fact failed most of the NASA routine tests (the overriding criterion was that s/he should be a complacent, unquestioning Republican - a criterion later expanded for choices of key people, including the position of president); the administrators and contractors bullied the scientists into a risky launch, reversing the traditional decision policy; after the disaster, every involved party pointed at each other in a circle instead of taking responsibility or proposing useful solutions; and during the investigation, the opinions of qualified scientists were ignored - in fact, denigrated - in favor of an amorphous miasma of fake piety and indignation. In the thirty years following, the Overton window steadily moved to the right and the bottom, resulting in today's baboon shrieks from talk show hosts, financiers and politicians who use fear, hatred and ignorance as banners and prodding sticks.

In short, a nation that once was at least trying to be progressive devolved into a horde of atomized, disenfranchised people who behave like spoiled children and allow their financial and political institutions to treat them like serfs - except that, individually and collectively, this country has an excess of "lawyers, guns and money". In a frightening parallel to the Weimar Republic of the thirties, people are encouraged to collude in their own enslavement and to vent unfocused anger on any convenient target - from the non-existent threat in Iraq to people who point out that anthropogenic global warming is with us or that healthcare in today's US is an abject (though preventable) moral, financial, political and scientific failure.

Now, this nation has been granted another chance - perhaps the last chance to arrest the decline before it becomes irreversible. Its people elected someone who embodies the signature outstanding qualities of this society: a mixed-race, multicultural, pragmatic meritocrat, a flexible and principled doer who, in political fact, is about as socialist as Eisenhower. But one swallow doesn't bring the spring. And the tendency to put Others belatedly and grudgingly in positions of power during crises is a common ploy of those who want to maintain the status quo without consequences to themselves. The unprecedented, unreasoning hatred and disrespect towards Obama is emblematic of the country trampling on its own best principles and representatives.

I chose this country as my home - and as a cultural half-breed I'm profoundly aware of its unique makeup and its still great potential. As an immigrant, a citizen, a cosmopolitan, a scientist, a writer, a human being, I won't give up the vision that brought me here and made me who I am. And I call upon all who dream and think likewise to join me: 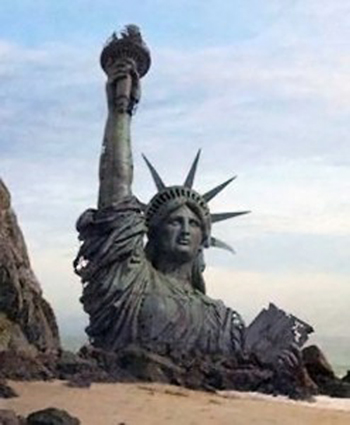 Let's dig her out and rekindle her light!