New Delhi -- If the Devil's greatest trick is pretending he doesn't exist, India's greatest political trick has been pretending it has a minimum wage when it really doesn't. And the consequences are quite Dante-esque. Two-thirds of Indians and their families -- some 750 million people -- live in a state of perpetual purgatory because they earn less than $2 per-person-per-day, the World Bank's definition of poverty. For 67 years successive Indian governments have created Byzantine anti-poverty schemes costing billions of dollars to help these "wretched people." But despite India being in the midst of a general election, no party is pushing for the one thing that would combat poverty without bankrupting the exchequer -- getting businesses to pay workers a living wage. All parties are promising voters they will create millions of new jobs. But they are silent on how these jobs will pay a pittance, keeping workers locked into poverty -- a poverty that makes big money for big business, which loves to exploit cheap workers, and big government, which loves to expand anti-poverty programs for officials to milk. Apologists for the status quo can justly claim India has had a Minimum Wages Act since 1948 and that it establishes a national floor wage and mandates states set minimum wages in different industries. But the law is among India's most complicated and worst implemented. India's official minimum wages are among the lowest in the world, even lower than Afghanistan's: 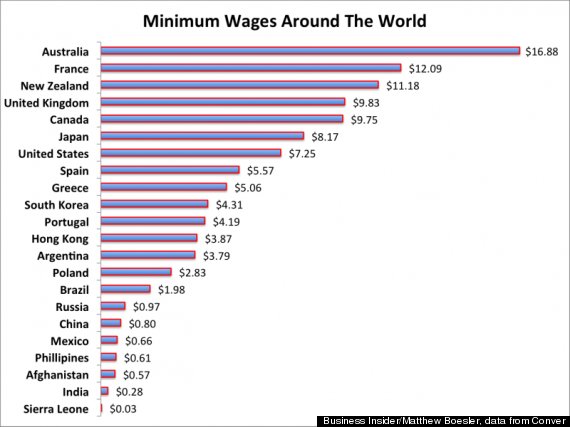