John McCain is all OMG! Maverick! Earmarks!
Obama is all Calm. Cool. Collected.

The entire past week, and especially the first debate, has shown us almost everything we need to know about the two candidates for president. Senator Obama is calm almost to a fault. A few of his supporters regularly ask for more demonstrations of "fire" from him. At some times he has the sort of demeanor that my mother would say indicates ice water flowing through his veins. 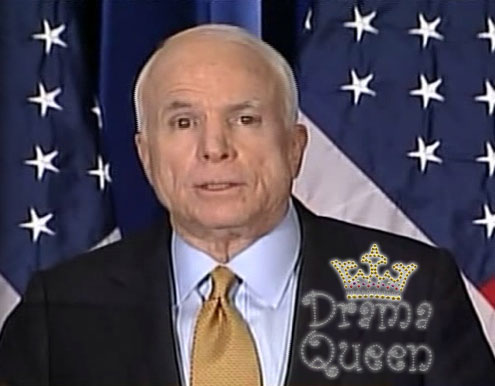 John McCain is largely the opposite of this. In many ways the senator is a Republican version of RuPaul, prone to the stereotypical mood swings and "diva" behavior associated with the drag queen subculture. When Senator McCain is not the focus of attention, he makes two snaps and screams for attention. Earlier this year his campaign attacked the press when the conventional wisdom said that the press, up until now 100% in the tank for him, were at least flirting with Sen. Obama. The videos they produced deriding Sen. Obama as a "celebrity" were a campaign version of the jilted girlfriend who throws her boyfriend's clothes out on the front yard so that everyone in the neighborhood can know what's going on.

It just gets worse. McCain's numbers were sluggish going into the convention so he bypassed all the other qualified Republicans for the likes of Sarah Palin, who is what passes for a legitimate candidate in this reality-TV-obsessed world. For a few weeks now the Palin bubble has deflated, with two gaffe-filled prime time TV appearances convincing the GOP they have to keep her on the stump with essentially the same speech she gave at the convention. Gov. Palin should worry about her job security, because as vice presidential candidates go making a switch is a pretty dramatic on the McCain scale.

But the best hissy fit was McCain fake-suspending his campaign while bringing his cameras and entourage into the already ego-filled halls of congress. His accomplishments added up to a big fat goose egg and he slunk his way back to the debate in Memphis where we were treated to a drama queen tour de force. He rolled his eyes, bared his teeth, mumbled under his breath and made an ass of himself in a way that only MaverickTM could.

Which leads us back to Obama. We live in perilous times, with wars in two nations, a fiscal crisis, and the threat of terrorism ever-present. In short, it's the exact time in which Americans need a sensible leader who won't dress up in sparkles and sequins in a ploy to attract the attentions of Brit Hume and Wolf Blitzer. Where Sen. Obama differs from past candidates who were described as lacking emotion because he has demonstrated an ability to connect to people on an emotional level that people like John Kerry, Michael Dukakis and Al Gore were not. Obama can afford to be caricatured by a very few as clinical if he's going to be the Rock of Gibraltar standing next to Hurricane Drama. The country is just now backing away from failed cowboy diplomacy, and has no desire to spend the next 4-8 years with the cowboys drunk septuagenarian grandfather.