The presidential campaign and the Occupy movement have thrust inequality into the spotlight -- and with good reason. When it comes to income inequality, the United States is on par with Gabon, Sri Lanka, and Tunisia; in fact, our country has greater inequality than 66 other nations, including every other affluent democracy. No Western European or Nordic country even comes close.

Every nation has some inequality. And not all inequality is bad. Good inequality helps motivate us by others' success, spurring us to seek new skills, innovate, and work smarter and faster. Good inequality can have a positive impact on people's lives and on America's global economic competitiveness.

But considerable research demonstrates that extreme inequality is very damaging for a society. Extreme inequality does not just affect the disadvantaged -- it affects everyone from all walks of life; its effects are separate from the effects of poverty, which blights the lives of those at the bottom of the ladder.

As the presidential campaign heats up, here are ten things the candidates should understand about why extreme inequality is toxic for America: 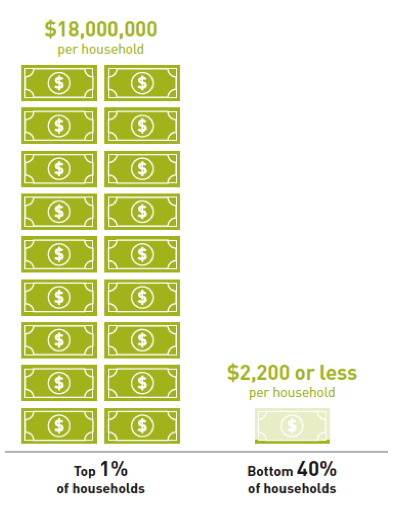 10. Economic health. When ordinary Americans get a raise, they tend to spend it quickly, replacing big ticket items that have broken, making delayed home or car repairs, or just catching up on the bills. Those at the very top of the ladder may buy additional services or goods as well. But $1,000 each in the hands of 5,000 Americans is far more likely to spur the economy than $5 million in the hands of one multi-millionaire.

9. Health. Research shows that extreme income inequality is bad for people's health. This "biology of inequality" is rooted in the conditions of daily life. Those who routinely experience little autonomy in their work, have less control over their living situation, and experience chronic stress from economic insecurity and a nagging sense of exclusion and unfairness face a higher risk of stroke and heart attack, higher rates of depression and other mental illnesses, and greater conflict in their personal relationships.

8. Children's aspirations. Disadvantaged children know what life looks like on the other side of the tracks. Research has shown that extreme inequality can lead to weakened self-esteem and frustration, ultimately curbing kids' aspirations and limiting their achievements.

7. Housing. Alongside the soaring income of America's wealthiest, the typical size of a new house has expanded as well. The higher sticker price of a home in a good school district has had a ripple effect for everyone else as they stretch to afford a place to live -- meaning that a quality public education is anything but free.

6. Services. There is a growing trend for the most powerful to "opt out" of public services, for example by sending their children to private schools, seeking boutique health care, or providing their own security and recreational facilities in private enclaves. When the rich choose not to use public services themselves, they are less likely to support vital collective investments in schools, hospitals, parks, police, and public transportation.

5. Trust and Cohesion. Neighborhoods with active civic groups tend to have greater levels of trust, community cohesion, and tolerance. Income gaps divide people, often resulting in large differences in lifestyles as well as social distance. When these distances grow to extremes, they too often result in physical segregation and breed suspicion and distrust.

4. Violent Crime. Inequalities between groups, especially when they are significant and increasing, can cause even run-of-the-mill disagreements to take a violent turn. Unequal access to basic needs such as jobs, schools, and housing, perceptions of unequal recognition, and other manifestations of inequality fuel resentment, humiliation, and a sense of exclusion, all common triggers for violence.

3. Democracy. Ultimately, extreme inequality threatens our democratic institutions. When only the rich even dare contemplate running for state-wide or national office and those without money to make political contributions are marginalized, the essence of our democracy is lost.

2. Stability. Extreme inequality can threaten and even upend social stability. We need only to look at the Arab Spring to see the consequences that follow when citizens believe they can no longer resolve their grievances through a political process.

1. The American Dream. A poor child born in France, Sweden, or Germany has a greater chance of being well-off as an adult than does a poor child born in America. As the country has grown more unequal, the steps on the social mobility ladder have grown farther apart, making it increasingly difficult to climb. A bedrock belief of most Americans -- that with motivation and hard work, anyone can make it in this country -- grows less true as inequality increases.

The good news is that much of this extreme inequality can be reduced or prevented. America has always been tremendously creative in finding ways to make the American Dream a possibility for more Americans. From Social Security to the GI Bill to the Earned Income Tax Credit, forward-looking policies have helped to reduce inequality, spur economic opportunity, and foster the building blocks of educated participation in our society. Reducing extreme inequality will require a similar collective investment in our future. To compete in a global market, as well as to stay true to our core national value of equal opportunity for all, there is no other option.

Sarah Burd-Sharps and Kristen Lewis are Co-Authors of the "Measure of America" series of the Social Science Research Council.