What would motivate an otherwise healthy 23-year-old American Ivy League graduate to put his life at risk to help Ebola victims?

For Raphael Frankfurter, executive director of Wellbody Alliance -- a group that provides free healthcare in Sierra Leone -- it’s a matter of finally putting a stop to such crises.

Though this particular outbreak -- which has claimed at least 932 lives in West Africa -- is particularly grim, it’s reminiscent of a number of crises from the past six years, according to Frankfurter.

This outbreak, and the ones that have preceded it, are a result of a "dysfunctional" and "poorly coordinated" health system, according to Frankfurter.

Before being named executive director last October, the Princeton University graduate spent four years interning for Wellbody Alliance, a grassroots group that has two physicians servicing about 500,000 in the public system. He conducted research on civilians who had been forcibly amputated during Sierra Leone’s civil war, Frankfurter wrote in an email to HuffPost.

It was that experience that prompted him to devote his life to trying to improve the health care there, and in particular -- the way medical professionals and patients communicate. 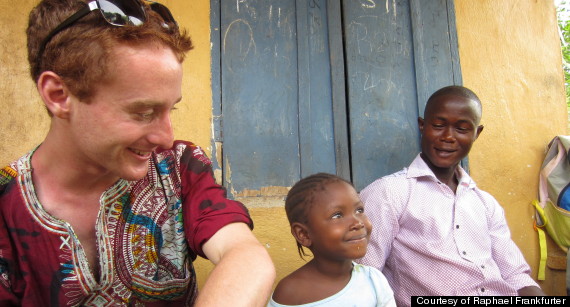 According to Frankfurter, the healthcare system has lost the trust of local impoverished communities. Because health workers -- both international and local -- fail to engage in an empathetic way with patients, they’ve become fearful of doctors and reluctant to seek their counsel, Frankfurter told HuffPost.

The outbreak has hit four countries in West Africa, but Liberia and Sierra Leone account for more than 60 percent of the deaths, according to the World Health Organization.

Contrary to some reports, the spreading of the virus has nothing to do with locals’ ignorance of the disease.

They're well-versed in the virus and know that they can get help at clinics. But these hubs have become synonymous with harsh confrontations and becoming immediately isolated from family members.

"Health workers should acknowledge, publicly, how frightening this disease will be for affected communities and how difficult it is for families to part with loved ones to likely die in isolation wards," Frankfurter wrote in a blog for Wellbody Alliance. "Such sympathetic gestures would serve to align the priorities of communities and the public health response."

While the outbreak has unleashed a warranted amount of concern, health workers need to impart urgent information, while still maintaining a level of respect towards the local culture and traditions, Frankfurter said.

For example, while bushmeat -- which includes wild animals, hoofed animals, primates and rodents -- was blamed for the Ebola outbreak, it’s not realistic for health workers to tell West Africans to swear it off.

Malnourishment is rampant in the region and this meat is often their only source of protein, Frankfurter wrote in his blog.

After spending centuries taking care of sick family members at home, it will take more than just an admonishment from a medical professional to get them to change their ways.

Before recently returning to the United States, a woman in Kona, Sierra Leone, died from the virus after attending a funeral where she was likely involved in the washing customs, ABC News reported.

Wellbody Alliance then went out into the community to find the 35 people with whom the woman had come into contact and urged them to get tested.

Rather than take the standard brass approach -- which usually involves military members surrounding a potentially infected person’s home -- the group went about it in a more amenable way so that the people wouldn’t feel "marginalized or intimidated," he told the news outlet.

Ultimately, all 35 people willingly got tested and none of them were infected, which was an "unprecedented success," Frankfurter told HuffPost.

At the urging of his organization -- which is only retaining medical personnel in the region -- Frankfurter recently returned to America where he’s focusing on fundraising and coordinating programs.

He hopes to return to Sierra Leone in September or October.

In addition to collecting funds, Frankfurter is also working on dispelling myths and alerting supporters to the needs of people in the area.

He’s also urging the public at large to try and offer up a measure of compassion and to remember that there is a "shared humanity" involved in this crisis.

"I think that out of the relationships I developed ... did emerge a strong sense that these people could be me," Frankfurter wrote, "that the degree of suffering they have experienced is unacceptable."

Find out more about Wellbody Alliance and how you can get involved here.