American Airlines announced Wednesday that it is planning to cut legroom for some economy class seats, shrinking the space nearer to that offered on budget airlines. The news broke the day after Congress threatened legislative action if airline executives don’t improve service soon.

Shrinking seat space is a tangible representation of the decline in customer service since the golden days of airline travel in the 1950s. Until 1985, seat pitch ― the industry term for the distance from one seat to another and a good proxy for what normal humans call “legroom” ― was between 31 and 35 inches in economy class, according to a 2014 analysis by USA Today. Now, the low end of that spectrum, about 31 inches, is standard for major U.S. airlines.

American’s plan would reduce the pitch from 31 inches on its current Boeing 737 Max jets to just 30 inches on the next ones. Some rows would get only 29 inches. That would be the least legroom outside of Spirit and many other budget airlines, which as CNN noted have an industry minimum 28 inches of room.

This apparent disregard for customers goes hand in hand with a broader trend in the airline industry toward less competition. In the last decade, the number of big airlines has dropped from nine to four, with the blessing of regulators. If you’re mad about disappearing legroom and want to take your business elsewhere, good luck.

The airline industry is hurtling toward monopoly, so there’s not a whole lot of incentive to try to win your business by offering a better product or cheaper prices. The existence of even four main carriers ― American, Delta, United and Southwest ― actually overstates the choice available to most consumers, because not all airlines operate out of all airports. It’s common for just one or two airlines to dominate a particular airport, The Associated Press found in 2015:

At 40 of the 100 largest airports, a single airline controls a majority of the market, as measured by the number of seats for sale, up from 34 airports a decade earlier. At 93 of the top 100, one or two airlines control a majority of the seats, an increase from 78 airports, according to AP’s analysis of data from Diio, an airline-schedule tracking service.

Customers are getting gouged as a result. If airlines were a competitive market, travelers would have seen a huge drop in ticket prices when the price of oil ― one of airlines’ biggest expenses ― fell from $115 a barrel in June 2014 all the way down to $30 in January 2016. It’s still hovering around $50 a barrel. But customers haven’t seen much benefit.

Indeed, airlines are making a lot of money right now ― $25.6 billion in profits in 2015 ― in part because they are taking the benefits of low oil prices and pocketing them, rather than passing them along to customers. They have the power to do that because the industry is a competition desert.

The average year-end U.S. airfare did drop from $396 in 2014, to $372 in 2015, to $344 in 2016, according to Bureau of Transportation Statistics data. But that looks piddling compared to oil’s decline, and it’s even worse when you read the fine print: Airfare costs do not reflect all the costs of flying, like baggage fees. Until 2008, baggage fees were mostly included in the initial fare price, but now they’re often paid separately. That can add $25 to $60 to each leg of a flight. Plus, some major carriers have established low-fare tickets that don’t allow passengers to use overhead bins, thus forcing them to pay for checked bags if they aren’t traveling light.

Historically, U.S. airlines haven’t made much, if any, profit. Since 2000, every major airline except Southwest has declared bankruptcy. US Airways, which has since merged with American, did so twice. The day after the recent United passenger-dragging debacle, the Financial Times’ Matt Klein noted that collectively, the airline industry has lost billions of dollars over the last 50 years. The record profits of 2015 are outliers.

If you’re hoping that maybe the profits from the recent boom years will be plowed into paying airline workers more ― which won’t improve legroom but still might make flying more pleasant ― it’s probably wiser to discard that idea. Look at what happened to American Airlines.

After spending $9 billion on buying back its stock since 2014, American recently announced that it was giving its pilots and flight attendants 8 percent and 5 percent raises, respectively. The pay increases will cost $1 billion over the next three years, which incensed Wall Street. American’s stock fell 5 percent the night after the announcement.

“We are troubled by [American’s] wealth transfer of nearly $1 billion to its labor groups,” JP Morgan analyst Jamie Baker said. Wall Street doesn’t want the money wasted on the little people, like workers and customers.

PHOTO GALLERY
Flying Used To Be A Delight

U.S. Airlines Have Basically Given Up On Trying To Make Us Comfortable
Flying Used To Be A Delight 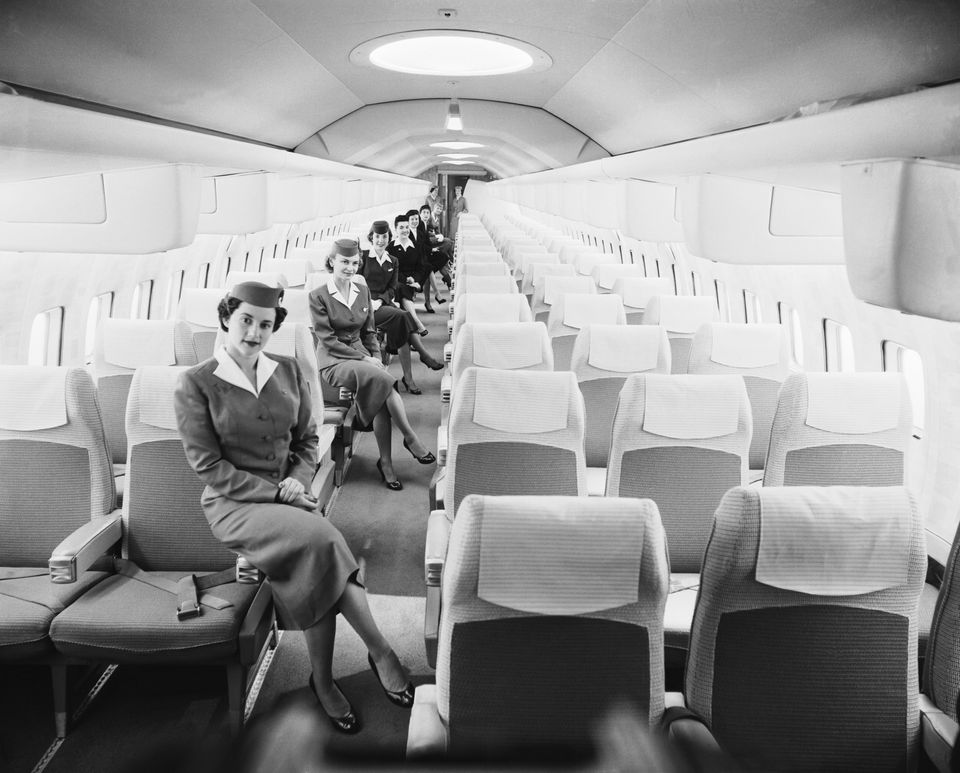 1 / 11
Gracing a&nbsp;luxurious mock-up of the Boeing Jet Stratoliner are a group of airline stewardesses. The half-million dollar mock-up was the first such jet transport interior to be completed in America.
Bettmann via Getty Images