To say that "senior citizens are in" would be overstating it, but it's safe to say that stylish grandmas and their peers are having a moment. So American Apparel up and cast a gray-haired model named Jacky in a new campaign called "Advanced Basics."

According to Fashionista, the new American Apparel spots are Jacky's modeling debut. So how did the company known for filling its ads with nubile PYTs come to cast a silver-haired stunner?

American Apparel wrote on its Tumblr:

There was something so compelling about Jacky's look and energy when we first spotted her in a New York restaurant this winter, we introduced ourselves and pulled up a chair. During a long discussion that touched on everything from career choices and nutrition to insights on relationships, age and beauty, we asked if she would consider being photographed by us. We were thrilled when she agreed. Here are some photos we've taken of Jacky over the last few months showing how she likes to wear American Apparel. We hope you enjoy them.

We definitely do. While Jacky appears younger than, say, Iris Apfel, her hair and unabashedly line-filled face are a startling and pleasant surprise from the clothing company. In addition to making a statement about timeless beauty, the "Advanced Basics" ads effectively demonstrate how wearable and versatile American Apparel's clothes really are. We've definitely passed a few American Apparel tees on to our moms -- it's nice that the company itself has finally caught on to the fact that older women wear those stretchy basics, too.

Check out the ads below -- isn't nice to see American Apparel doing something non-controversial for a change? 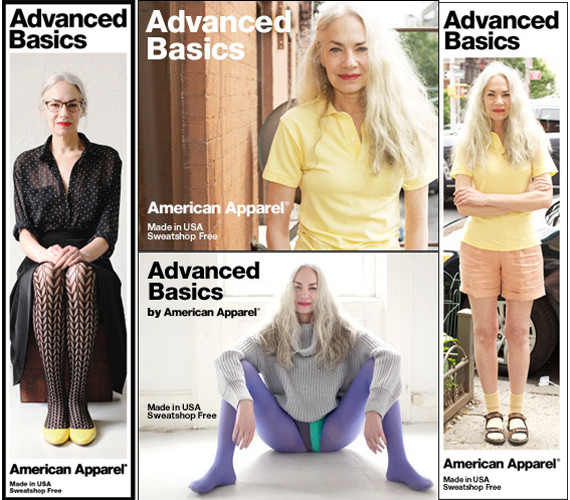