Is your dog trendy enough to wear American Apparel?

Despite repeated backlash over its envelope-pushing advertising and numerous lawsuits, American Apparel has undeniably established itself as the dresser of America's "hip" youth, (even if those kids aren't always willing to pay for the clothes). American Apparel's rise from trendy to ubiquitous has happened relatively quickly. It wasn't even that long ago that the true urban outfitter was just opening in the neighborhood that now arguably most defines the brand, home to the "hipster Olympics," New York City's Williamsburg, Brooklyn.

Whether you like to think of yourself as a trendsetter or you just can't get enough of their V-necks, here are a few things you never knew about American Apparel.

1. The American Apparel factory is the largest garment-making facility in the U.S., despite the founder not believing in "Made in USA."

That said, the founder of American Apparel, Dov Charney, doesn't exactly believe in the company's slogan, "Made in USA." This is what he told BuzzFeed:

"I don't believe in 'made in U.S.A.,' really, but that's a secret...My vision is a kind of America for everyone, like where people could come and go and it really doesn't matter where you make the product, it's about paying a fair wage -- but right now, we have a kind of society with borders, and on one side of the border, people have money and on the other side of the border they don't," he says. "So Europe does, Africa doesn't. Right? Vietnam doesn’t, Japan does. This is, like, all these lines. What we're trying to do is build a business that's very futuristic in the sense that we don't want to rely on these labor inequalities that are not going to be sustainable forever anyway."

2. You can buy an American Apparel hoodie for your dog. 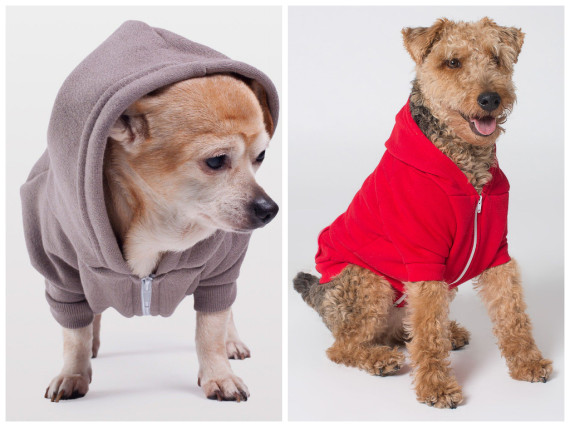 American Apparel introduced a line of clothing for dogs in 2012 and has since expanded the collection, which includes canine wardrobe items such as the classic hoodie and this neon pink "dragon dogzilla" costume.

The now-defunct culture website Hipster Runoff once made a point of covering American Apparel's every move and gave context to the company's decision, explaining, "The hoodie is often worn by swaggy tweens, emos, pokemones, and cool dads who aren't wearing a cardigan. But now the hoodie is officially a dog-wave fashion statement."

3. The company was originally founded out of Charney's dorm room at Tufts University.

The company was started in 1988 out of Charney's dorm room at Tufts University, where he used a Mobira Cityman 900 mobile phone to take orders and conduct business. The company's name came from a business partner, as Charney describes:

It was during my freshman year at Tufts, that my T-shirt company took on the trade name "American Apparel," but I didn't actually come up with the name. I briefly entered into a partnership with Bob Smith, owner of Kellsport Industries one of the authorized Hanes wholesale dealers, and the name "American Apparel" was actually his idea. He thought I was a little difficult to deal with and months later, he told me he loved me, but things were not going to work out. I returned the $16,000 he invested to the enterprise several months later, and continued using the trade name.

Despite the company's edgy image and Charney's wild-child persona, he claims that he "never went to any parties while at" Tufts.

4. When the company was started in 1989, it was actually called "American Heavy Apparel." 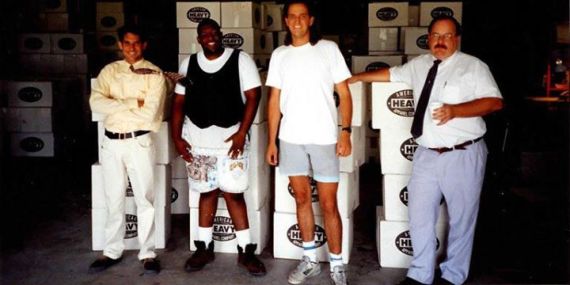 Although the name and business came from Charney's time at Tufts, American Apparel didn't begin to manufacture its own clothing until 1989, when Charney moved to South Carolina and started commissioning factories in the state. In these early days, the logo was for "American Heavy Apparel," as can be seen in the picture above of Charney and his early colleagues.

5. Woody Allen filed a $10 million lawsuit against American Apparel. Allen later settled when the company threatened to call Mia Farrow to the stand.

Woody Allen filed a $10 million lawsuit against American Apparel in 2009, after the company ran a series of billboard and Internet ads featuring the director without his permission. American Apparel's lawyers initially argued that the $10 million figure Allen wanted to compensate for the damage of his image was a ridiculous request due to Allen's image already being tarnished. Citing his affair with current wife Soon-Yi Previn while married to Mia Farrow, along with other "sex scandals," which may have included the alleged abuse of Dylan Farrow in 1992, American Apparel threatened to bring Mia Farrow and Previn to the stand to talk about the incidents under oath .

The two eventually settled for $5 million and Charney wrote a letter on his website explaining that he related to the allegations of sexual abuse brought against Allen, who he described as, "a man who has long been one of my inspirations."

6. Charney allegedly masturbated in front of reporter and has been the subject of multiple sexual harassment lawsuits.

Charney has been no stranger to sexual harassment lawsuits, including accusations of forced oral sex and throwing dirt at an employee, among other things. In 2004, he allegedly masturbated in front of reporter Claudine Ko while she was writing a profile for Jane Magazine. "Saturday Night Live" even lampooned Charney with an impression by Fred Armisen during a Weekend Update segment in 2008.

All of this said, the majority of the sexual harassment lawsuits brought against Charney have not been taken to court or are still outstanding.

7. The company embraces unconventional models in its ads. 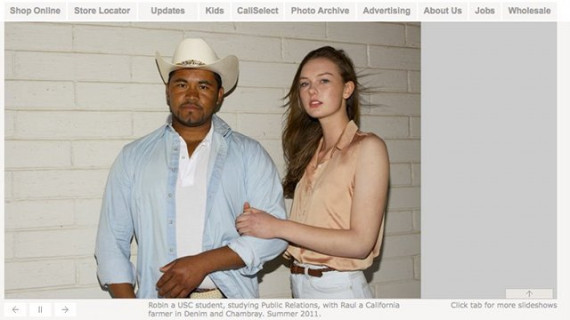 Whether this is progressive or accessorizing for publicity is up for debate. But for what it's worth, these models are getting hired for work that they normally wouldn't get in most American ad settings.

8. There's an alleged "no ugly" policy for retail floor employees. 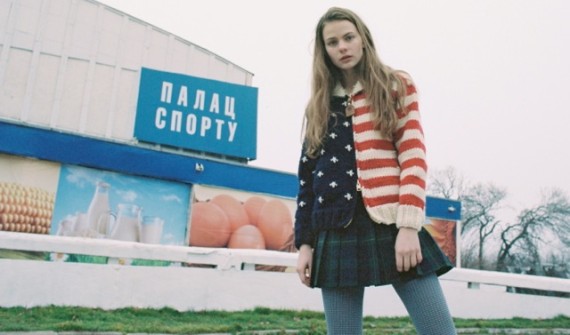 Although forward-thinking in its model choices, American Apparel is infamous for employee accusations that it has followed what's essentially a no ugly policy for its sales floor staff. Because sales associates are considered models and ambassadors of the company, an extremely strict fashion code exists for employees while they're on the floor. If you're not "cool" enough, that's a problem, employees have claimed.

Gawker had an open call for American Apparel employees to submit stories and received this gem:

I'm remembering one of the many times some 19 year old girl, who knew Dov "personally", showed up without warning acting like she owned place, saying she had been sent there to do a hiring event (we had just had one the week prior, in which I hired for all the staffing we needed..based off of resumes and experience as well as personality and style). We hosted the hiring event a day or two later and interviewed potential workers for about 10 minutes each all day long. There were some really good applicants. After each one that I thought was promising, the girl would hmm and haw and start in about "natural natural natural", "Oh, I don't think so...she had a tattoo on her arm. We're really trying for a natural look" "Nooo she had that tiny little nose ring..we really want natural looking girls" "She was wearing make-up..we want girls who are comfortable looking natural". At the very end of the day, after hearing the word "natural" at least a thousand times, there I was sitting next to this girl in our store's office. I reached up to grab something off a shelf, and that's when she realized that I didn't believe in shaving my armpits (I actually did trim them regularly..it was just a tiny little bush strip haha). She squealed and started yelling about my armpit hair and then she started to say something about the company's image and did I really not shave them ever...to which I replied "naturally".

Dov Charney replied to allegations of the "no ugly" policy in 2009 saying, "At American Apparel, we strive to hire salespeople who have an enthusiasm for fashion and retail and who themselves have good fashion sense. But this does not necessarily mean they have to be physically attractive." When more allegations popped up when allegations emerged that the company was now just calling employees they found unattractive "off-brand", the company used the same response. More allegations have continued since, with less media coverage.

10. American Apparel has a bit of a history with crime.

Shoplifting from American Apparel is such a popular activity that even the employees have reportedly participated en masse. According to a story in Dig Boston:

The company’s worst-kept secret is a combination of lax security and corrupt management that virtually encourages them to steal, a combination that’s led to employees at multiple retail locations in the United States, individually and in teams, stealing countless thousands of dollars in merchandise from the company.

It wasn't until 2012 that the company finally installed radio-frequency ID tags to help prevent all the shoplifting.

Employee drug use has also become a sort of legend for the company, thanks to a number of allegations from workers. As one self-described employee recounted for Jezebel, "I thought cocaine was kind of scandalous when I started working at American Apparel. And so I naturally found it kind of scandalous that a major coke dealer actually served as a kind of informal HR chief for many of the American Apparel stores in New York." 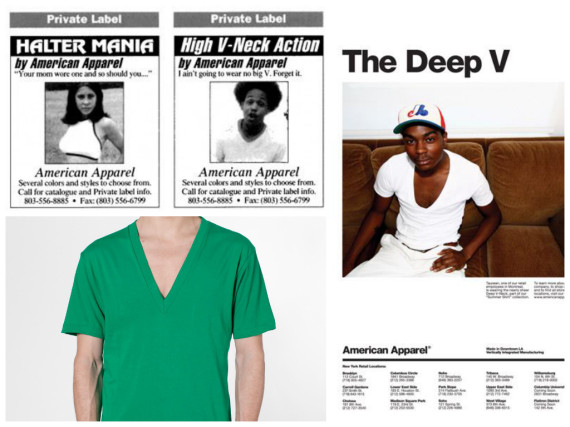 Despite its current status as one of the defining looks for the company, the deep V was actually the butt of jokes in 1996 American Apparel ads, back when they were promoting their high V-neck shirts.

As seen in the picture above, the company would come to embrace "The Deep V".

In 2013, American Apparel began selling a "Period Power" shirt, which can still be purchased for $32. After many publications (including The Huffington Post) were surprised by the shirt, Vice reached out to the designer and asked for her take:

VICE: What do you think of the media storm you've started?

Petra Collins: It's really awesome. I’m not surprised. It's exactly what I wanted because it totally proves my point…

VICE: And what is your point?

Petra Collins: That we're so shocked and appalled at something that's such a natural state -- and it's funny that out of all the images everywhere, all of the sexually violent images, or disgustingly derogatory images, this is something that’s so, so shocking apparently. The graphic on my shirt is a line drawing, too. It's not even a full-on image.

The debut of this shirt came months before the company added visible pubic hair to store mannequins.

13. The American Apparel aesthetic is influenced by the 1976 Montreal Summer Olympics. 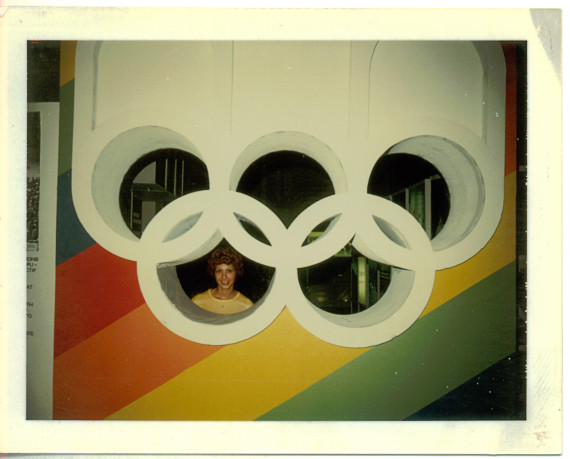 The 1976 Olympics have been described by American Apparel as "a recurring motif in the company's history." Charney was born in Montreal and was seven years old at the time. Looking at old pictures of the athletes, it's certainly possible to see where the inspiration came from.

BONUS: Here's one more picture of a dog wearing an Am Appy hoodie. 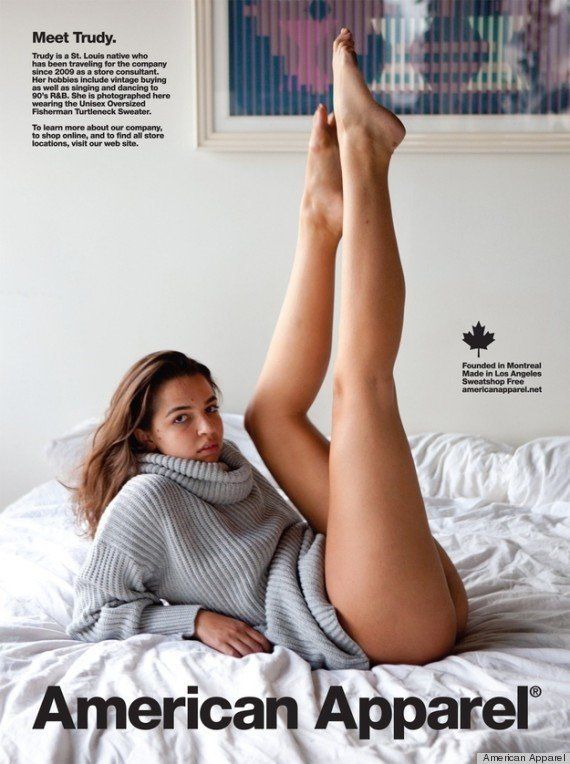 1 / 33
American Apparel April 2013
The ASA claims a complainant stated that the ads made the models appear "vulnerable" due to their positions.
Courtesy