The beginning of 2017 came with disappointing news from American Apparel. As a crusader for domestic-made products, the retailer's weakness came not from its altruistic model, but from errant leadership and a reluctance to grow with market changes. A brand that had a strong identity and morals lost its way from the top down, ultimately leading to its demise through an acquisition and shuttering of its retail stores.

In the brand's infancy, founder and CEO Dov Charney displayed unique leadership and forward-thinking visions. The brand's identity began to evolve as early as 1997, becoming known as a no-frills American-made manufacturer of quality products that rejected what has become a standard practice of human exploitation in the apparel industry. It swiftly gained recognition, opening 150 stores after its first year and nearly doubling that in the next three years. It continued to gain traction and in 2008 company shares reached $14. Yet Charney's infamous reputation for inappropriate behavior and the company's inability to change with the industry caused it to sell recently to Gildan Activewear Inc, a Canadian clothes manufacturer.

Contract Help from Employees
The signs were there. Once a desired workplace destination, in recent years American Apparel's ratings on sites like Glassdoor.com have plunged, with comments from current and former employees deriding the culture and leadership. A proactive leadership team will internalize this kind of feedback to 1.) determine if the gripes are legitimate, and if so 2.) concoct an action plan that addresses the issues.

In a similar vein, strong leadership will take time to walk through their company and hear what employees from every level have to say about their jobs. Usually problems arise for employees that work with the product or customers every day and can identify what is not working.

These criticisms can be the biggest assets to your company. Documenting these ideas then trying to find solutions can move your brand to leading the industry rather than just playing catch-up. It has been publicly reported that previous American Apparel leadership had significant mismanagement the brand, creating a ripple effect that led to disorganization and the dissatisfaction plainly evident on Glassdoor.

Create a Culture of Engagement
So what is the solution? A Hay Group poll found that engaged employees showed 43 percent more productivity. Engagement can come in the form of encouragement, transparency and integration in company happenings. Having employees understand how their work contributes to the overall company's goals can help engage employees.

Transparency between employees and leadership can also give employees the confidence to approach leadership to raise concerns and bring ideas. Target recently used this model in their internal communication to create a culture of togetherness and inclusion. That culture will allow your employees to feel empowered rather than hindered to contribute.

Conversely, when your brand and its leadership are at loggerheads over litigation, remaining silent only breeds unease and anxiety.

Embrace Change
Since its founding, American Apparel remained positioned as a young-ish, niche brand that marketed with controversial sexualized advertising. The campaigns had stayed relatively similar all through its life. Many consumers knew what to expect and did not see much change in their product. 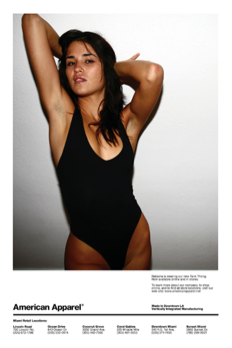 But some things did change. For instance, the age-old axiom that "sex sells" has, during the dawn of a new era in social justice and gender equality voices, weathered criticism. A look at the brand's arc of advertising sees a relentless adherence to this strategy, even as the world around it changed.

Responding to changing market forces and consumer trends is as important as good ideas themselves. American Apparel had a strong business model - producing quality products without human exploitation - but failed to hammer home that message in marketing their products. Operationally, the brick-and-mortar outlet failed to innovate online and create a strong online shopping presence.

Perhaps these changes could have saved the company, or at least staved off bankruptcy a bit longer, but they are far from the only brand to meet this kind of demise. The scandal with their then-CEO - and the failure to replace him in a timely fashion - stunted their growth and ultimately their demise. One important role of leadership is to continue to look forward for the brand, even when that means cleaning house.

Remember Brand Identity
While change can mean growth, forgetting your brand and confusing your consumers can be detrimental. Your brand identity is set to tell the story of your company in a clear, consistent voice. It is what consumers will connect with and learn to trust. Brand loyalty has become as strong as advertising in the past years; consumers will forgive a company numerous failures if they feel the brand is connected to them. Keeping your brand in mind when you are thinking of taking the company in a new direction can help your consumers feel comfortable and enthusiastic with the change.

American Apparel made the mistake of not reiterating why they were spending $30 for a T-shirt. Its original mission was to produce quality American products without exploiting its labor force. This message was not reinforced in its marketing and consumers began to seek cheaper, faster fashion. Its failure to advertise its message led to its failure when the change to fast fashion dominated the market.

While Dov Charney brought a strong vision and a commendable mission to the apparel industry, he also became a distraction that drew attention from the core product and inhibited the leadership's ability to keep up with market trends. True visionary leadership doesn't only come from visionary individuals. Constant auditing and contribution from all employees will help your brand stay on top of its needs and the needs of consumers. Innovation is a very delicate to get right and see through to success. It's a moving target. If you miss it often enough, you will find yourself out of chances.