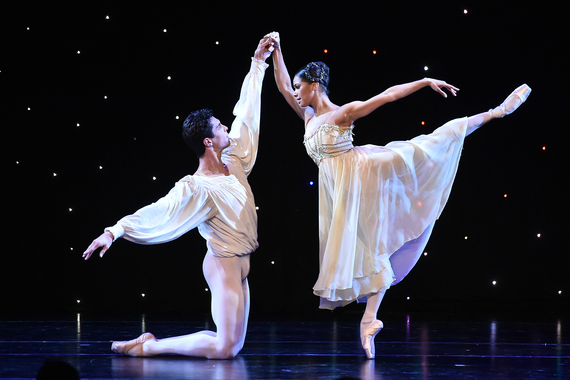 As the holidays are here, nothing brings in the festive spirit more than watching The Nutcracker, featuring some of the best dancers in ballet.

This year, the ABT's annual holiday benefit was held at the Beverly Hills Hotel on December 5, 2016, and featured excerpts from The Nutcracker, Sleeping Beauty, Romeo and Juliet, and Don Quixote.

During the cocktail hour, Jayne Seymour was in attendance among a group of patrons, donors, and dance supporters. When I asked her why she was attending this event, she replied with, "I was a dancer and got injured and became an actor by default." Seymour will be starring in a new television series, His Wives & Daughters, which will air on CMT and will start shooting in 2017.

For this "One Night Only" event, the audience was treated eight dance pieces, including a spectacular performance of Romeo and Juliet with ABT Principal Dancer Misty Copeland and ABT Dancer Alexandre Hammoudi.

American Ballet Theatre Executive Director Kara Medoff Barnett thanked the dancers and told the guests that although their offices are in New York City, they consider Southern California their second home.

The ABT will present Alexei Ratmansky's The Nutcracker at the Segerstrom Center for the Arts in Costa Mesa from December 9-18, 2016

Guests mingled with dancers over dessert and it was a memorable night for all.