WASHINGTON -- At various moments over the past two decades, Coca-Cola, the massive soft-drink conglomerate, has aligned itself with Mothers Against Drunk Driving in campaigns to promote vehicular safety. In 1996, the company teamed up with Wal-Mart to donate more than a quarter million dollars to MADD. In 1997, it launched a campaign in which it gave 15 cents for every case of soda sold in Wal-Mart stores over a six-week period to the anti-drunk driving organization. In 2012, Coca-Cola's own website praised the "crucial role" that MADD was playing in the United States in "aiding the fight against drunk driving."

Unbeknown to MADD, at the same time that Coca-Cola was helping organizations combat drunk driving, the company was also a member of a trade association that fought tougher drunk driving laws. 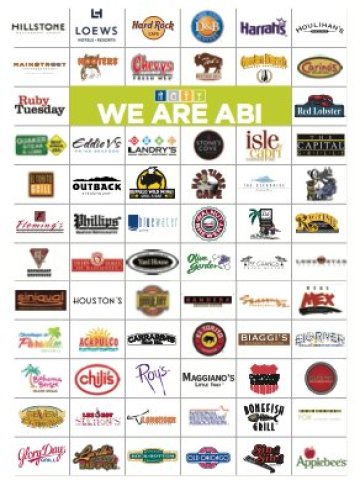 Companies like Olive Garden, Outback Steakhouse and Carrabba's were members of ABI in 2013.

Coca-Cola Food Service is among the nearly 150 companies listed as members of the trade association American Beverage Institute either in 2011 or 2013, according to documents obtained by The Huffington Post. Coca-Cola North America -- the North American operation -- was listed as a member in 2003.

"On behalf of our customers, Coca-Cola has provided support to ABI over the years," said Coca-Cola spokeswoman Kirsten Witt. "We are not engaged in ABI advocacy efforts."

Up until now, the companies' longstanding involvement with ABI has been largely a secret because ABI won't share the list of members with the general public. The Huffington Post obtained a list of names from the good-government group Citizens for Responsibility and Ethics in Washington, which discovered the documents during a site-specific Google search of ABI’s website.

"I really don't know what to say," said J.T. Griffin, chief government affairs officer for MADD when told of Coca-Cola's association with ABI. "It is a little shocking. I guess it is unfortunate. But it certainly is their right."

The American Beverage Institute was started in 1991 by longtime political consultant Rick Berman, whose advocacy on behalf of tobacco, booze and anti-union interests has earned him the enmity of consumer advocates and the gratitude of industry forces grateful for a barroom brawler in Washington, D.C.

ABI's mission, according to its website, is "the protection of responsible on-premise consumption of adult beverages." What that has meant, in practical terms, is campaigns to oppose legislation to lower legal blood-alcohol limits for drivers, stop the implementation of breathalyzer ignition technologies in cars, fight increases in alcohol taxes and push back against sobriety checkpoints.

The work requires its fair share of political combat, often against MADD. The two groups have butted heads on nearly every alcohol-related issue. ABI officials routinely call MADD a "neo-Prohibitionist" anti-alcohol organization. The clashes still take place, though according to officials with each group, they happen less frequently these days.

In addition to the combat, ABI's work has also required its fair share of secrecy. As a 501c6 organization, ABI is not required to list the names of its members. And, like basically all of Berman's empire, it doesn't. That secrecy has made it the object of frustration for critics who have complained that ABI is doing the dirty work of companies that wouldn't dare be caught advocating such policies on their own.

"This is the way Washington operates these days," said Melanie Sloan, CREW's Executive Director. "I think that many of those companies would be insistent that their participation be secret because there's just no way they want to take on those kind of aggressive tactics… . They're not going to go out and attack Mothers Against Drunk Driving. None of them. But they seem happy Mothers Against Drunk Driving is attacked."

In an interview with The Huffington Post, Sarah Longwell, ABI's managing director, insisted that the organization's member list is not private. "We give these out to prospective members. We give them out to all of our current members. We publish a book every year that has all the companies in it," she said.

But when The Huffington Post asked Longwell to direct us to a list of members on ABI's website, she acknowledged that no such page exists. During an interview on Friday, she agreed to provide a full copy of the materials handed out to members at the organization's retreats. She then backtracked, offering the material only if The Huffington Post shared with her the ABI info that we had obtained. We declined.

"We don't like to have our members singled out by reporters. So we don't just turn over our list to them when they ask," Longwell said, explaining why the names were not being given upon request. Later, she insisted that the whole matter was overblown.

"If you just googled the major companies in the restaurant, beer, wine and spirits industries, you pretty much have a list of our members," she said. "It's everybody." 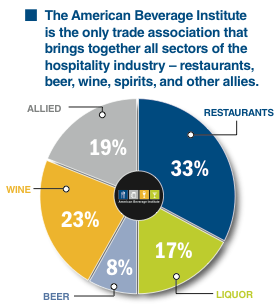 In 2011 promotional materials, ABI broke down its members.

According to 2011 ABI materials, an estimated 48 percent of the group's members are from the wine, beer and liquor industry. The names of members include companies like Samuel Adams, MillerCoors and Skyy Spirits that would have less obvious discomfort being part of a trade association that pushes hot-buttoned alcohol-industry-related policies. Longwell took issue with the characterization from critics that her group tries to help these companies undermine stricter drunk driving laws. She pointed out that ABI has worked with MADD's founder Candy Lightner, who had a falling-out with the organization in 1994. Several reporters who have covered the political battles over drunk driving laws, including The Huffington Post's Ryan Grim, have criticized MADD for overreach.

But the list of ABI members also include several companies that, like Coca-Cola, cater to a wider audience that may find the association troubling. All told, 33 percent of ABI's members are restaurants, including family-oriented chains like Chili's, Ruby Tuesday, Olive Garden, Red Lobster and P.F. Changs.

The Huffington Post reached out to every organization listed on the ABI documents from 2011 and 2013. Few responded to the requests. The majority of those who did referred comment to the association itself.

"Red Bull works with industry associations throughout the world; these working relationships are matters for the associations and are not appropriately answered by individual members," said Anna Berkl, international communication specialist for Red Bull Media House.

Other companies said they were proud to associate with the trade group and supported some of its efforts.

"Hard Times Cafe does not support the reduction [of the legal blood alcohol level] to .05 from .08," said Rich Kelly, an executive at Hard Times. "We are in favor of the courts enforcing the laws that are in place."

A few, however, sought some distance from ABI or some of its political efforts.

"We became a member because we sell a great deal of beverages in multiple venues, but we’ve never participated in a campaign," said Harrah's spokesman Gary Thompson.

In public materials, ABI claims to have 8,000 members, though several of the companies listed on their materials, including Heineken and Foster's Group, said that they weren't actually members during the year they were listed.

ABI members are asked to pay various amounts of dues. According to other 2003 documents, retail members are expected to pay "$125 per unit per year, with a maximum contribution of $100,000." Companies that produce beer, wine, and spirits have dues fees as low as $2,500 a year (if their annual sales are under $500,000) and as high was $75,000 a year (if their sales are above $2.1 billion). Those member that are "non-alcohol" companies pay dues based on how many meetings they attend per year. The range is between $2,500 a year (for companies with under $1 billion in sales that attend no meetings) to $45,000 a year (for those with $2 billion in sales that attend the three ABI meetings a year).

What a company gets for those payments are a variety of influence-peddling functions without their fingerprints attached. Among the various efforts that ABI has opposed are increases in the alcohol tax, bans on alcohol advertising, and the installment of more sobriety checkpoints, which ABI deems neither effective or cheap. The group has fought againts the lowering of blood alcohol limits, which it says hurts "responsible moderate drinkers" and it opposes the development and use of ignition interlock devices in cars, which it argues will eventually evolve into a mandate that all cars be equipped with such technology.

ABI was registered to lobby the federal government up until 2007. It still writes op-eds, editorials and letters to the editor; operates a number of websites; runs thousands of public service announcements on radio; produces informational campaigns and places ads against "negligent driving" -- in which it calls attention to the role played by cell phone use while downplaying the role of drinking. Two ABI ads can be viewed below.

For a small group, however, ABI does seem to have outsized influence. And for Sloan and others, the fact that the group's donors would have remained private were it not for a well-timed google search is problematic. ABI's secrecy is not universal; some trade groups do disclose their members.

"It allows the members to have things said on their behalf that they would never say themselves," said Sloan.