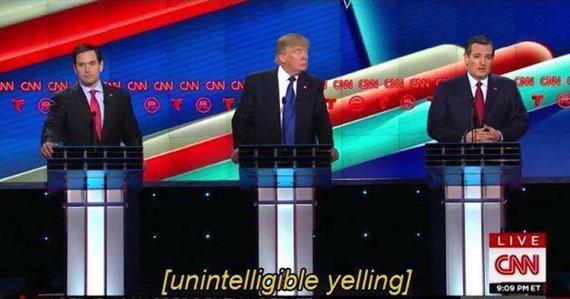 The Barna Group has been putting out research for years about the decline of Christianity in America. A recent study in 2015 found that "In just two years, the percentage of Americans who qualify as "post-Christian" rose by 7 percentage points, from 37% in 2013 to 44% in 2015. Across the United States, cities in every state are becoming more post-Christian -- some at a faster rate than others." You can see the metrics of what it means to be "post-Christian" here; but for the purpose of this post, we only need to realize this as empirical and statistical evidence that Christianity is on the decline.

This has never been more visible than when watching the Republican debates.

As the picture above sums them up quite well, the debates have been both eye-opening and terrifying. On the surface, they have shown that many, many people are furious with the state of the GOP establishment. But they have also shown that there is a constituency of hateful people in America that are starting to speak up in multitudes -- against Obama, Mexicans, Muslims, women, and black people. Yesterday, Trump had a group of black students thrown out of his rally, not for protest or disruption, just for "silently standing" there. 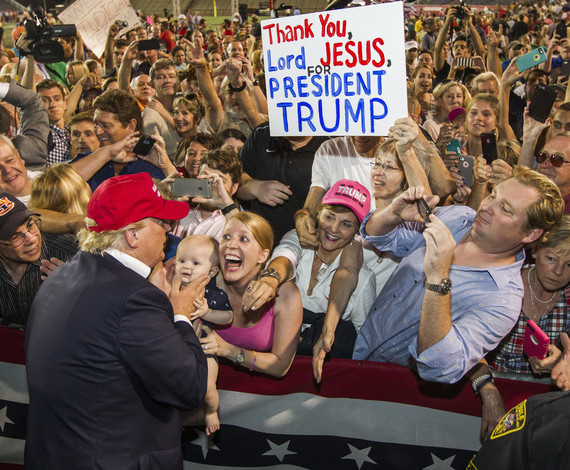 The scariest reality of all of this is: the Republican nominees are self-professing Christians and are supported by self-professing Christians. They have proudly voiced their anti-Obama sentiments and they honestly believe that one of these candidates will lead the country "back to God." (i.e. their own particular construct of who God is.) Somehow, American exceptionalism has resurfaced as a thing of the past, something that people are looking forward to leading the people back to -- back to the dominance of evangelicalism and the social and economic realities of it. American Christianity is now aware of its own mortality and is kicking and screaming its way to the grave.

Let's be honest. We are living in a more pluralistic society that is incompatible with the modern outlook of most Baby Boomers. Meanwhile, interreligious dialogue and partnerships are on the rise. We are at the cusp of religious freedom triumphing over the religious hegemony of the past. Instead of parading a corpse around, we need to look, with hope, to the future. Just as death is natural, so too is the death and rebirth of religions. With death comes a letting-go and the possibility of a new future. This is what happened in the Reformation, as well as with other movements over the millennia within Christianity.

That is what I am suggesting; that this dying is not only natural, but it is important and positive.

Let's be clear. We need only to let go, to pull the plug. When American Christianity became about discriminating against minorities, hurting instead of helping the poor, oppressing women's rights, keeping out immigrants and strangers instead of welcoming them, hate-spewing towards other religions, all the while accumulating wealth and power, it is time to let go. We have so blurred the lines between Jesus and American ideals that we have used the latter in support of the former.

In letting go, we will find unexpected freedom in relinquishing control.

This is my hope and my burden, to not deny the dying of American Christianity, but to find new life on the other side. We must not let polarity pull us to one extreme or the other. Loving God and our neighbor is lived from the center, beckoning all on both sides to come together. Our country needs more prophets, not polemics. Resist the urge to fight the inevitable and let's look for new life, together.