Welcome to America, land of the free, home of the high intergenerational earnings elasticity.

What’s that, you say? You don’t know what intergenerational earnings elasticity is? Well, it’s basically a measure of how hard it is to for someone to end up in an income class different than that of their parents. So if you're rich, a lot of elasticity is a good thing. If you're poor, not so much.

And the U.S. has about twice as much of this elasticity as its Canadian neighbors to the North, according to research by University of Ottawa economist Miles Corak. That means Americans are much less likely to escape the circumstances of their birth than in Canadians. So much for the American Dream.

The problem really isn’t in the middle of the income ladder, where the two countries are rather similar, according to Corak. Instead, the real difference between the two countries exists on the periphery, among the richest of the rich and the poorest of the poor. There, American sons are remarkably more likely to end up in dad’s income tier.

Take a look at this chart, which shows how likely American (blue) and Canadian (pink) rich kids are to end up on certain rungs of the income ladder: 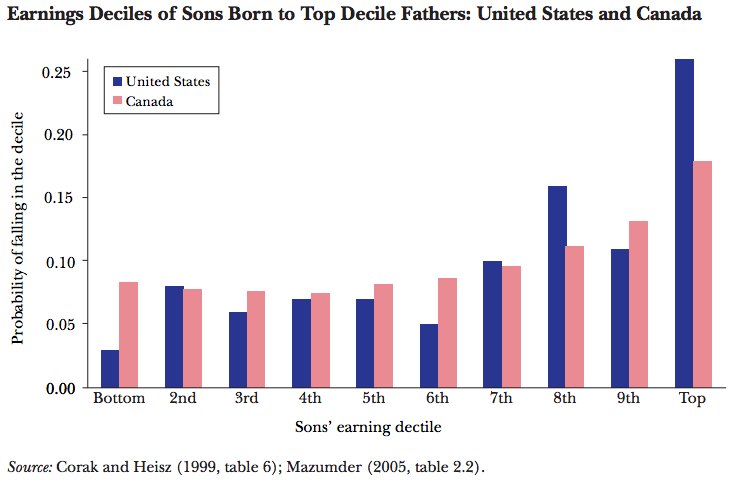 As you can see, American rich kids are much more likely to stay rich. Yay for freedom! Now let’s look at the other end of the ladder. Here is how likely poor American boys are to stay poor compared to impoverished Canadian kids: 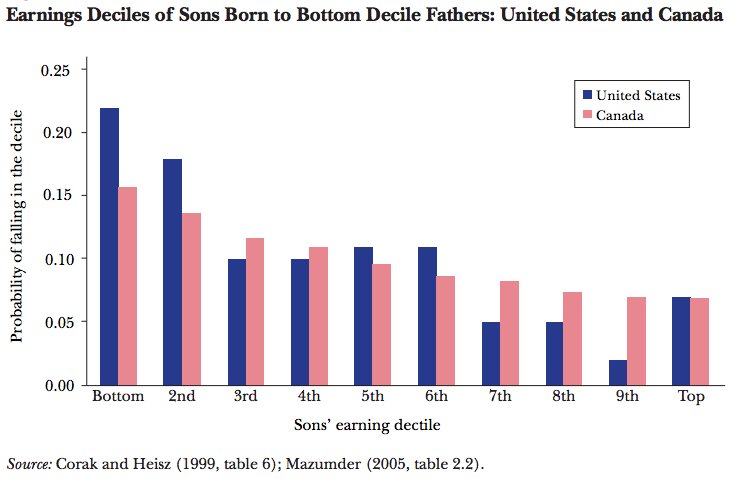 Same story, more or less. So while you may have heard this week that new research found some 20 percent of U.S. adults make more than $100,000 at some point at their lives, remember: At the top and the bottom of this country, we're more likely than our neighbors to the North to stay right where we were born.