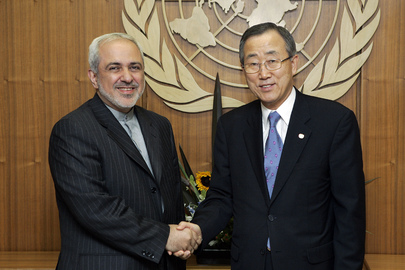 Was it the rise of American style as much as the reality of the "new world order" designed around one super-power that appeared to deliver a new wave of diplomacy at the United Nations in the early 1990s? Representing post-Soviet collapse aspiring democracies from Europe to Latin America, more U.S.-educated ambassadors joined the ranks of those at the helm of their state's diplomacy at the UN. Iran's then-Deputy Representative at the United Nations was approachable and effective in diminishing Iran's isolation. The Islamic Revolution had left some uncertain as to how to interact with the diversity of friends and adversaries, but Mohammad Javad Zarif was confident and relaxed in presentation even if intense about his work. He would later become Iran's UN Ambassador and most recently was named Foreign Minister by the incoming "moderate" President Hassan Rouhani.

Unlike most of the American educated ambassadors, I actually also felt American and insisted on maintaining my U.S. citizenship -- something I was not only proud of but also perceived as intertwined with representing an aspiring democracy, the Republic of Bosnia & Herzegovina (BiH), struggling to fend off aggression and genocide. Perhaps it was thus more natural that Zarif, even a couple of years junior to my 34, would become my most frequent contact with Iran. Facing aggression in the region and active indifference from the big powers at the UN, part of my perceived representation of my birth country was to bring BiH to the top of the agenda, whether by the appeal of legal arguments or raising the uncertainty for those who would ignore.

Zarif was non-ideological and pragmatic in his view of BiH attachment to the U.S. Our shared American experience was more asset than cause for suspicion.  Undoubtedly some other diplomats including from Paris, Beijing, Moscow and London were more unsettled by my American identity, a point that became even more notable with the arrival of Madeleine Albright, another naturalized US citizen, and with whom I would also develop a close working relationship. While Iran could be of tactical assistance to help BiH, Zarif understood our need to develop a more strategic partnership with the US. Perhaps in a moment then when the window to Washington-Tehran rapprochement was slightly ajar, Zarif perceived Bosnia as a potential bridge where US and Iranian sympathies might coincide on basis of a victimized peoples and country. (In the late 1990's Shia Muslims were also victimized by the Taliban in Afghanistan and several thousand were systematically murdered along with an Iranian "diplomatic" delegation in that country.) Sarajevo and I also encouraged such rapprochement, but the opportunity to open a new door for US-Iran relations was soon closed as hardliners dominated via the politics of inertia.

Iran's Perception of its History, Culture and Regional Role:

Iran perceives itself as the region's power-broker, and the U.S.-Iran divide is real. Beyond the ongoing diplomatic-military confrontations and the nuclear program, the gap may be growing from political/ human rights to the destructive effect of economic sanctions that add to Iran's broader deterioration from a historically and culturally advanced society. Not everyone in Washington or Tehran is interested in a resolution as the potential for ongoing confrontation also feeds the political and economic agendas of some. Foreign Minister Zarif will bring a new style to Iran's foreign policy. Whether there is also a change in substance remains to be seen - foreign and nuclear policy is likely to continue to be dictated by the long-standing "Supreme Leader" rather than the new President. (During the recent inauguration, the Supreme Leader Khamanei positioned himself as the final authority on legitimizing the new President Rouhani and complemented this with the optics of seating himself in a noticeably elevated position to the other political and religious leaders in attendance, something I view as contrary to humility and Islam as well as the integrity of Iran's democracy and the aspiration for an egalitarian society. Former French President Francois Mitterrand also exhibited a similar dictate for seating himself above all and then delivering lectures to national/international audiences.)

Iran as "Pivot" and Pivotal?

Nonetheless, Mr. Zarif's easy style may help transition the substance of Iran's foreign policy and nuclear talks toward a path more likely to deliver results. Tehran's interests may not aligned with those of Washington, allies and neighbors on many issues in Syria as well as the nuclear agenda, but Iran may be crucial to the future of stability in neighboring Iraq and Afghanistan. Iran cannot be avoided from its impact on the region, from oil prices to its influence in the Islamic world, whether such projects in regressive or progressive terms. Iran has been historically rival to Russia's ambitions around the Caspian, and China is most notably a sometime ally of convenience in the current global alignment.

Let there be no mistake: Zarif can be and is a tough negotiator -- it is also part of the American style and negotiations as poker table. However, the hope would be that such earnest as well as tough interaction has as its purpose to deliver a narrowing of the divide rather than fuel the optics of confrontation that has been the motive of at least some. It is in the interest of the US, Europe, the region as well as Iran to move away from the brink of a war that may be simple to ignite but then difficult to put out.