Would you like to ruin your Fourth of July party for your friends and family by being that person? Here's the ammunition.

It's that time of year again, when fireworks light up the sky and we all think about the wonder that is America. Friends remark to friends, "Isn't America beautiful?" and answer, "Indeed, from sea to shining sea." Well, maybe this is the year to celebrate with some truth fireworks. While fireworks may improve any party, truth fireworks burn them to the ground. Have a fun barbecue!

1. That "All-American" sport of baseball probably came from England. 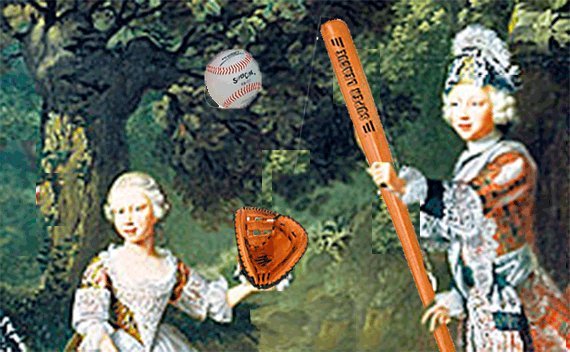 When even Major League Baseball's official historian John Thorn calls the history of baseball "a lie from beginning to end," you know you're in for a doozy. While an early 20th-century American commission found that late Civil War hero Abner Doubleday invented baseball, historians have since uncovered earlier references to the game, indicating that variations of it had long been played all around America. What's more, new evidence suggests that the first recorded game of baseball was actually played by the Prince of Wales in 1749, according to American researcher David Block and the Surrey County Council. Old diary entries describe baseball as a well-established 18th-century pastime in England, enjoyed by men and women alike. One recorded game of British baseball was even followed by a cup of tea and a game of cricket. Cheers. 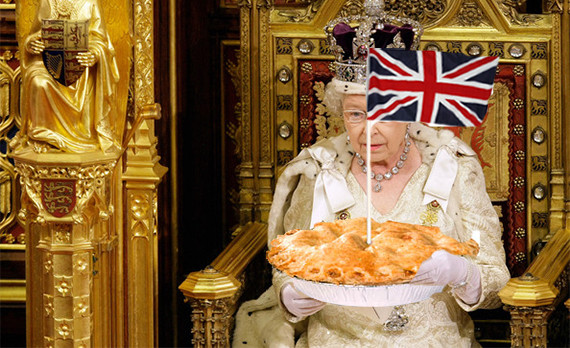 Yup, England was eating apple pie before America was even a thing. Settlers in America copied English recipes, and pies became a staple of American food culture. The first known reference to the dessert comes from a 16th-century English poem, which read "Thy breath is like the steeme of apple pies." Sexy.

3. The tune of our national anthem comes from an old drinking song... from England. 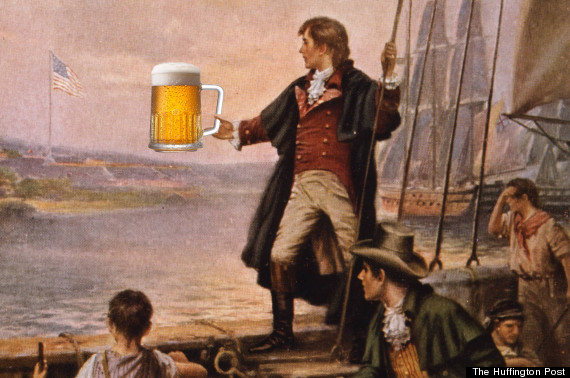 Francis Scott Key lifted the tune for the "Star-Spangled Banner" from a drinking song written in 1770 for a London gentlemen's club. Reusing melodies was a pretty common musical practice in those wild pre-copyright protection days. The original song espoused the gentlemen's love of women and wine.

For the first century or so of American life, there was no formal "pledge of allegiance." But in 1892, in response to a sense of wavering patriotism, a magazine called The Youth's Companion charged one of its writers, minister Francis Bellamy, to write a Pledge of Allegiance to the American flag. It was published on September 8, 1892, after which is quickly skyrocketed to popularity... as did sales for American flags in schools. Bellamy went on a "roadshow" around the country encouraging schools to adopt the pledge and install flags. (To his credit, it seems Bellamy's motives were more aligned with the magazine's love of country rather than hoping to make money off the flags.)

The pledge has undergone a few slight transformations over the years. Originally, instead of putting your right hand over your heart, you'd raise your hand in the classic Roman salute (yes, similar to the salute later adopted by the Nazis). Schoolchildren eventually stopped doing that salute for obvious reasons. Also, the words "of the United States of America" were added to make it clear to immigrants who they were pledging to and "under God" was added during the Red Scare.

The Triple Five Group, based in Edmonton, Canada, owns the Mall of America, which is located in Bloomington, Minnesota. This gargantuan monument to credit cards and food courts may seem like the brainchild of a true, bootstrapping American; but don't let that fool you. Triple Five developed the Mall of America from the beginning. But hey, a new Benihana just opened in the mall, and what's more American than that?

This bird actually has something else to be embarrassed about besides being bald. Instead of a shrieking "keyahhh," it's more like a run-of-the-mill "meep meep." When it comes to bird calls, the bald eagle is pretty basic. Connie Stranger, a bird expert, told NPR, "Unfortunately for the bald eagle, it has like a little cackling type of a laugh that's not really very impressive for the bird." Meep meep indeed.

7. Settlers didn't really tame the American frontier... since it was pretty much tamed already. 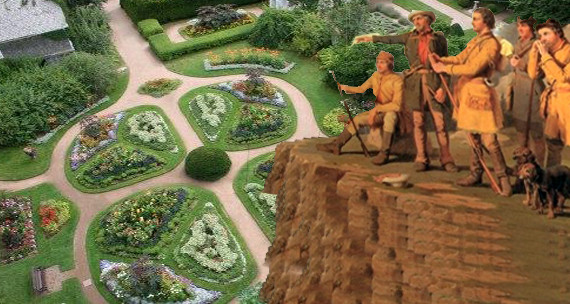 Conventional folklore celebrates the brave settlers who traversed the wild American landscape. Thing is, the land had already been carefully cultivated by Native Americans, according to Charles Mann's book 1491. He writes that, "Rather than the thick, unbroken snarl of trees imagined by Thoreau, the great eastern forest was an ecological kaleidoscope of garden plots, blackberry rambles, pine barrens, and spacious groves of chestnut, hickory, and oak."

Europeans in Ohio discovered woodlands that "resembled English parks -- they could drive carriages through the trees." In the middle of America, colonists found mass expanses of prairie, or "barrens," that Native Americans had cleared to use as "game farm" for the animals they hunted. As James W. Loewen notes in his book Lies My Teacher Told Me, New England colonists regularly set up camp on Native American cornfields rather than carve out new lands for themselves. Settling a country isn't so hard when somebody else has already done it for you.

8. Like hot dogs? Lewis, Clark and Co. consumed over 200 dogs during their journey across America. 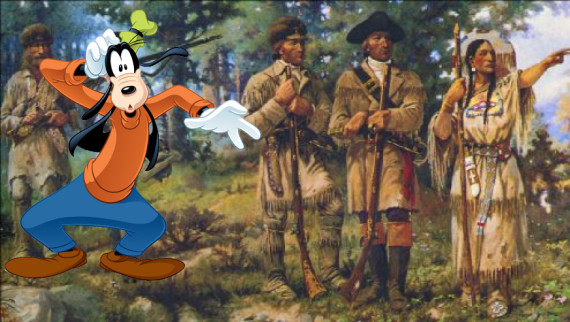 More than a few canines were sacrificed over the course of this westward exploration. During their journey, Lewis and Clark's "Corps of Discovery" team chowed down on 200 dogs. It wasn't their culinary favorite; they preferred elk, beaver tail and buffalo. But when there was no attractive alternative, they settled for dog meat. Only Clark refused to indulge. While Lewis ate his share of dog meat along the trail, he still had a soft spot for one pooch in particular; his pet dog, Seaman. In fact, Seaman accompanied Lewis and Clark on their westward journey. (Seaman never became dinner.) 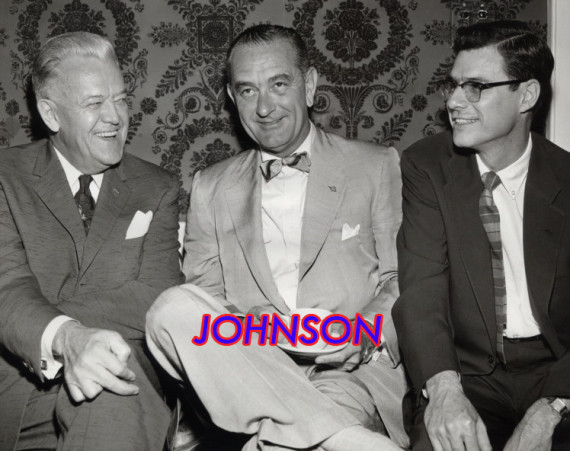 As confirmed by everyone from coworkers to reporters to members of his special "harem," President Lyndon Johnson loved taking his penis out and showing it around. Johnson called his penis, "Jumbo," and he and Jumbo actively competed with his predecessor President John F. Kennedy's womanizing ways, trying to bed women with methods such as sneaking into their bedroom and saying, "Move over. This is your president." Johnson would also urinate seemingly wherever he pleased, which once may have included the leg of a Secret Service agent. 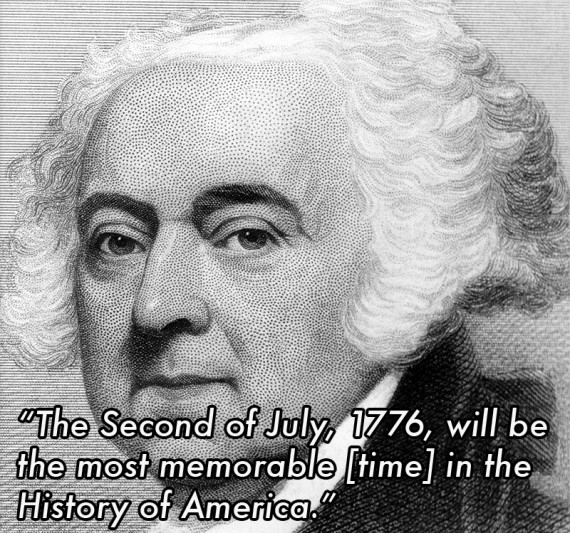 The above quote is from John Adams, who would become the second president of the United States. On July 2, 1776, the Second Continental Congress in Philadelphia voted to approve independence; later that day, the Pennsylvania Evening Post published, "This day the Continental Congress declared the United Colonies Free and Independent States."

So what is the Fourth of July, then? It's the date the Continental Congress actually adopted the Declaration of Independence. That said, it's believed that most members didn't sign it until August, and England had no idea about the Declaration until August 30. For what it's worth, this was the second half of Adams' quote: "I am apt to believe [July 2] will be celebrated, by succeeding Generations, as the great anniversary Festival."