For the 4th of July, here's the little-known story of a kid, his impossible teacher, and our glorious 50-star flag.

In 1958, a 17-year-old Bob Heft set out to complete an open-ended assignment for his American History class in Lancaster, Ohio. "Like a science fair" project, he would later explain, students could make whatever they wanted.

To hear him speak about it, it's clear Heft has told this tale countless times.

Inspired by the Betsy Ross story -- legend has it, the seamstress was called upon by George Washington himself to design the flag during the Revolutionary War -- Heft set about ambitiously making his own. At the time, there were only 48 states in the union. But, working off a hunch that Alaska and Hawaii would soon join, Heft added an extra couple stars. The teacher was unimpressed.

"He said, 'Why you got too many stars? You don't even know how many states we have,'" Heft recalled. (Harsh, teach.)

He earned a B- for his efforts -- which involved dissecting a 48-star flag his parents had received as a wedding gift and sewing it back together himself with knowledge he'd gleaned by watching his mother. The whole process had taken over 12 hours, he later told The Houston Chronicle. He'd even asked his grandmother to help, but she'd refused, upset that he'd ruined a perfectly good flag.

"Now, a B-minus ain't that bad of a grade," Heft admitted. "However, a friend of mine, Jim, he'd picked up five leaves off the ground -- he's taping these leaves down to the notebook and labeling them elm, hickory, maple -- and the teacher gave him the grade of an A. I was really -- I was upset."

An A for leaves taped to paper, and a B- for a hand-sewn emblem of our great nation. The teacher -- who, at this point, may have simply had it out for young Bob Heft -- said he'd bump up the grade if the U.S. government officially adopted his design. The sheer indignity of it all gave Heft the momentum he needed.

In August 1959, 21 letters and 18 phone calls later -- not to his parents' great pleasure upon seeing their phone bill -- Heft got a call from then President Dwight D. Eisenhower, inviting Heft to see his creation hoisted up the flagpole. But Heft was working and didn't know if his boss would let him take a quick vacation. So, to his boss' horror, he put the president on hold. (It all worked out, of course.)

On July 4, 1960, the 50-star flag was officially raised over Fort McHenry in Maryland, with Heft standing proudly by. True to his word, Heft's teacher gave him that hard-sought A.

Bob Heft later become a teacher himself. He kept a brisk schedule of motivational speaking engagements -- over 200 in his last year -- and died in December 2009. At the time of his death, his school project was safely tucked away in storage. 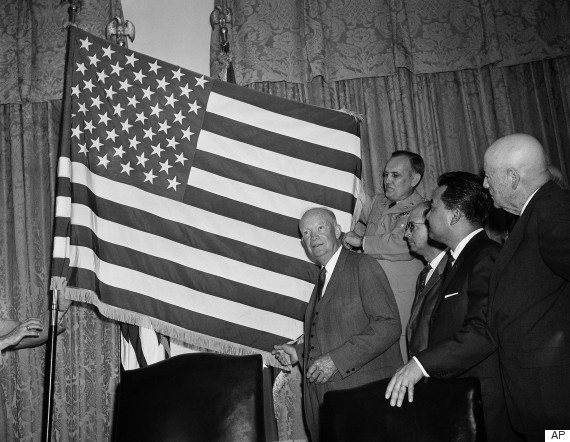