"Vulnerable nations still depend on us to deter aggression from their larger neighbors," says Marco Rubio. "Oppressed peoples still turn their eyes toward our shores, wondering if we can hear their cries."

"The world is slipping out of control," warns Jeb Bush. "We have no reason to apologize for our leadership and our interest in serving the cause of global security, global peace and human freedom."

Hillary Clinton insists, "We have to use all of America's strengths to build a world with more partners and fewer adversaries, more shared responsibility and fewer conflicts, more good jobs and less poverty, more broadly based prosperity with less damage to our environment." These are ambitious agenda items for any one government, even the sole superpower. Or maybe they're simply the familiar bromides that U.S. presidential candidates think voters expect. As the 2016 U.S. presidential campaign heats up, it's time for an adult conversation about America's role in tomorrow's world. Whatever some candidates might say, successful foreign policy is not simply a reflection of the generosity of the president's vision and the strength of his will. It involves hard choices that require tradeoffs, risk and sacrifice.

Many governments now have the political and economic self confidence to say no to U.S. plans and demands.

The time has come to open an urgent national conversation on this subject because the world -- and America -- have changed profoundly in the past 25 years. Many governments now have the political and economic self confidence to say no to U.S. plans and demands. Adding to the limitations the next president will inherit, recent polls suggest the American people have grown cynical about the value that superpower status provides U.S. citizens and taxpayers. For both these reasons, preeminent power just isn't what it used to be. Yet, for the foreseeable future, the U.S. will remain the only country on Earth with the military, economic and political muscle to persuade governments in every region of the world to take actions they wouldn't otherwise take. China is developing extraordinary economic influence, but its military can't compete with America's outside East Asia. No other country has the hard power, innovative economy and cultural influence that the United States can draw on. The next president will have real options, and it's time to start debating them. Here are three broad strategies that future leaders could adopt: Independent America

Instead of squandering lives and resources on poorly planned foreign policy adventures, it's time for Washington to mind its own business, and let other countries accept greater responsibility for their own security and prosperity. Rebuild this nation's strength from within. Invest the billions we've squandered abroad in American education, innovation and crumbling infrastructure. Take much better care of our veterans, the men and women who have paid the highest price for our post-Cold War superhero foreign policy. Leave more dollars in the taxpayer's pocket to power the American economy forward.

If the U.S. is to remain secure and prosperous, there are a few foreign challenges that must be met, and it's in America's interests for Americans to meet them. We can't afford to intervene in so many trouble spots at once, but nor can we retreat and expect others to pick up the slack. Focus less on selling American values and more on enhancing America's value. Stop treating the rest of the world as if they are "Americans at an earlier stage of development." Set aside pointless arguments about how "exceptional" we are, and build a foreign policy designed solely to make America more secure and more prosperous. Mind the cost. Set priorities and stick to them. Indispensable America

In a profoundly interconnected and dangerous world, America can't remain safe unless we work to ensure that governments everywhere answer to their citizens. Americans must fight for democracy, rule of law, human rights and open markets because the world -- and therefore the U.S. -- will never know sustainable security and prosperity without them. Someone must lead the alliances that manage conflict, prevent terrorists from gaining access to the world's most dangerous weapons, contain threats in cyberspace and lead the fight against transnational crime and the worst effects of climate change. Who but America can do these things? Who but America can lead?

For the past 25 years, we've acted as if we were becoming stronger in the world. We're not, and our foreign policy should reflect that.

Unfortunately, U.S. foreign policy of the past 25 years should be called "Incoherent America," because from Somalia to Afghanistan to Iraq to relations with Russia and China, Presidents Clinton, Bush and Obama have improvised responses to problems and crises as they arose and not improvised very well.

I believe that, as the world's sole superpower, Indispensable, Moneyball and Independent are all viable options, but only if future presidents can build the durable public support needed to sustain them. Easier said than done, of course, and that's one of the reasons that Independent America is the choice that comes closest to what I believe is best for the country.

America's true promise depends now on our willingness to lead by example. To select the Indispensable approach is to ignore the reality that the American people will not support costly interference in countries and questions they don't care about, and there is no evidence that this trend will prove short-lived. To select Moneyball is to cope with that change by sacrificing our values. Some governments and their citizens might welcome an America that behaves more like an ordinary country, but there won't be much support for such a cold-blooded foreign policy back home. Most Americans still believe their country is exceptional, even if they don't agree on what makes America different or how best to protect that difference. And the idea of "value over values" runs counter to what Americans want to believe about themselves and their country.

America's true promise depends now on our willingness to lead by example.

To embrace Independent America is to find a new purpose for those values. Polling now suggests that a majority of Americans believe "it's time for the U.S. to mind its own business internationally and let others get along the best they can." Perhaps that's because many now accept that a stronger will, deeper insight and deeper pockets will not help Washington reshape the world as we would like. It has become unavoidably obvious that no nation, not even the sole superpower, can consistently get what it wants in today's world.

This is not isolationism. America must never become a fortress. We should continue to export things of value, particularly technology, energy, and food. Welcome those who come to America to build a better life for themselves and their families, including a larger share of the world's growing number of refugees. Embrace trade, including the Trans-Pacific Partnership, because stronger commercial and investment ties will be crucial for the continuing strength of alliances that can no longer depend on U.S. military might.

Nor is it a defeatist vision. Imagine the boost for the U.S. economy if the hundreds of billions spent to rebuild Iraq and Afghanistan had gone to bolster American strength and resilience. Put an end to our prohibitively expensive superhero foreign policy, and Washington might finally invest more money more wisely in American education, rebuild failing U.S. infrastructure and provide proper care for the swelling ranks of U.S. veterans. Allow Americans to keep more of what they earn to help build the strong, resilient economy crucial for the country's future. Let America's strength, optimism, dynamism, openness, inclusiveness and innovative spirit serve as the country's message to the world. Build an America that others believe is too important to fail.

Recent polls suggest the American people have grown cynical about the value that superpower status provides U.S. citizens and taxpayers.

Set and maintain an exceptionally high bar for political and (especially) military intervention beyond our borders. Let Europe lead on Ukraine, and don't pick fights with Russia that offer America nothing. Insist that NATO can survive only if other members accept a greater share of the costs and risks. Let Germany and Japan, two of the world's richest nations, assume responsibility for their own security. Share weapons and information with those most threatened by ISIS, but don't fight another war in Iraq. Don't stand between Iran and Saudi Arabia. Build trade and investment ties with China, but accept that choices made in Beijing, not in Washington, will decide China's future. For the past 25 years, we've acted as if we were becoming stronger in the world. We're not, and our foreign policy should reflect that. It won't be easy for future presidents to withstand periodic waves of intense pressure from hawks at home and friends abroad to entangle the U.S. in new foreign conflicts, particularly those that involve allies, traditional rivals, headline-capturing atrocities or any combination of these. A drive to refocus Washington on domestic priorities will inflict significant damage on relations with allies like Japan, Israel and Britain. We will forfeit some of the already limited influence we have with China's leaders as they make critical decisions. But I believe that what we gain in return for these changes will far outweigh what we lose. This is my choice but not the only choice. Like Moneyball and Indispensable, the Independent argument has important strengths and flaws. My hope is merely to get this argument started. The U.S. remains the world's most dynamic society because Americans care less about what's been accomplished than what's next. That's the right starting point for this long overdue debate.

PHOTO GALLERY
10 Most Expensive Wars In U.S. History
Download
Calling all HuffPost superfans!
Sign up for membership to become a founding member and help shape HuffPost's next chapter
Join HuffPost 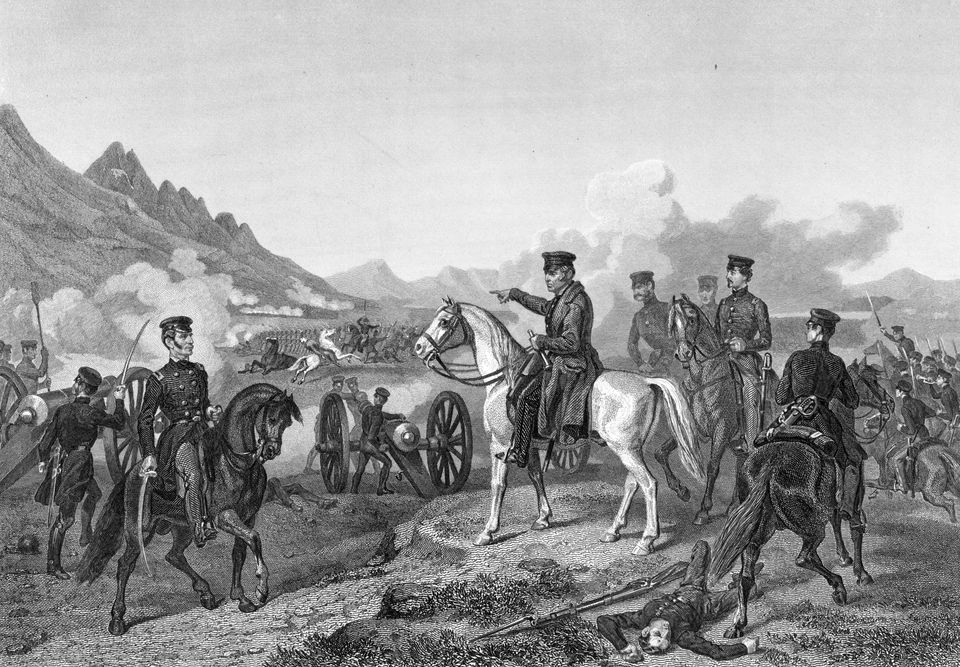 1 / 10
10. Mexican-American War
Fought between 1846 and the start of 1848, the Mexican War cost the United States $2.4 billion, the 10th-most expensive war in U.S. history. Texas, having gained its own independence from Mexico a decade earlier, had still not been granted statehood by the U.S. Texas’ annexation would have upset the equilibrium between slave and free states established by the Missouri Compromise of 1820. Mexico hoped to capitalize on U.S. indecision when its army crossed the Rio Grande to attack U.S. forces in the battle of Palo Alto. The war ended on February 2, 1848, with the Treaty of Guadalupe-Hidalgo, which established the Rio Grande as the southern border of Texas and settled U.S. acquisition of land in present-day California, Utah, Nevada, Arizona, and New Mexico for $15 million.
Hulton Archive via Getty Images