Pessimism is ubiquitous throughout the western world as the pressing issues of massive debt, high unemployment and anemic economic growth divide the populace into warring political camps. Right- and left-wing ideologues talk past each other, with neither side admitting the other has any good ideas. The time has come to silence this left versus right shouting match -- this dialogue of the deaf -- once and for all. Impossible? No. 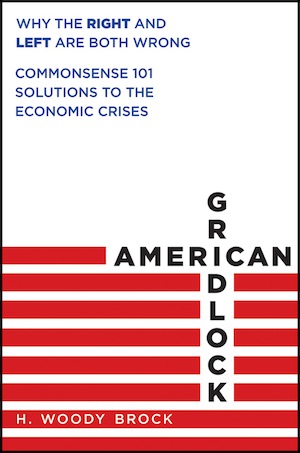 In my new book, American Gridlock: Why the Right and Left Are Both Wrong, I outline ways to bridge the divide, illuminating a clear path out of our economic quagmire. Using rigorous deductive logic, I identify win-win solutions to many of those seemingly insoluble political problems.

There are five challenges critical to the nation's future: preventing a lost decade with permanently high levels of unemployment, sparing the nation long-run bankruptcy from exploding health care costs, preventing future perfect financial storms, standing up to "thugocracies" that take unfair advantage of us (China and its trade policies), and addressing the vital issues of distributive justice, or fair shares of wealth and income.

Most importantly, in the book, I demonstrate how deductive logic (as opposed to ideologically driven data-analysis) can transform the way we think about these problems and lead us to new and different solutions that cross the ideological divide. Drawing on new theories such as game theory and the economics of uncertainty, which are based upon deductive logic, I reveal fresh ideas for tackling issues central to the 2012 presidential election and to the nation's long-term future:

Ultimately, my goal with American Gridlock is to cut through the stale biases of the right and left, advance new ways of thinking, and provide creative solutions to problems that threaten American society.