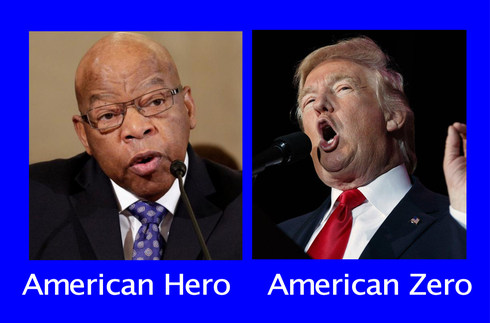 Early this morning, Donald Trump apparently retrieved his phone from wherever his staff had been hiding it from him so he would not do further damage with his tweets.

The Alleged President-elect (aka The Man from Vlad) tweeted: "Congressman John Lewis should spend more time on fixing and helping his district, which is in horrible shape and falling apart (not to mention crime infested) rather than falsely complaining about the election results." "All talk, talk, talk -- no action or results. Sad!"

The chutzpah of a man who, by his own testimony, has never sacrificed anything except to make money for himself, attacking one of the greatest people in American history, a man who has never hesitated to give his all for the fulfillment of American ideals, a man who has been all actions that achieved remarkable results, in this way may be a new low even for Mr. Trump, who has already lowered the bottom level of "low" so many times.

This morning's vile tweet was a response to Rep. Lewis yesterday again displaying his courage in speaking truth to power by saying, "I don't see Trump as a legitimate president." Would that media people and other Democrats had his courage to state the obvious: Would-be Emperor Trump has no clothes. He lost the election by nearly 3 million votes, was assisted immeasurably by Russian intervention, was essentially given the presidency by James Comey, lied like no major politician before him, bullied opponents and the defenseless, is totally unfit ...

Putative--no, make that Putintive--President-elect Trump likes to end his angry, repulsive tweets with "Sad!" Henceforth, let us all end our tweets about @RealDonaldTrump (which is, of course, an oxymoron) with "Mad!"

Give me a genuine American Hero over a phony American Zero any day.