I am not writing this new, regular column because nobody else writes one like it--though nobody does--or because I love this country--and I do--or because these stories need to be told. Though those are all true and good reasons. I write "American Hero Stories" because Americans who work as taxi drivers or lawyers or doctors or waitresses need to hear them to truly understand how important the sacrifices of our American heroes really are to all of us. It's one thing for us to walk around enjoying our everyday lives in comfort, bliss and obliviousness superficially saying when it's convenient, we "support the troops." But is quite another (better) thing entirely to know, understand and respect the courageous sacrifices these brave men and women make with their families everyday. And, to hear about these extreme sacrifices first-hand from the people who made them. (Wherever possible, I will refrain from editorializing and instead rely upon the storyteller's own words.) 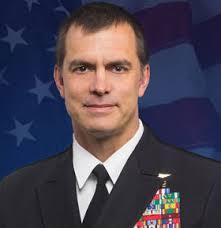 Thom Shea was a Navy SEAL (Sea, Air & Land) for 23 years. Special Operator, Chief SEAL Shea did three tours (approximately six months each) with SEAL Team Two in Kosovo, Macedonia and the Gulf, as well as two tours with SEAL Team Seven in Iraq and Afghanistan. During his military career he served in three wars, ultimately leading a team of Navy SEALs into Afghanistan in 2009 where he earned a Silver Star, Bronze Star with Valor, Army Commendation with Valor and his second Combat Action Medal. He was hand-selected to serve as Officer in Charge of the famed SEAL Sniper course from 2009 to 2011.

Having retired early this year, Thom has many great stories of trial and tribulation; sadness and sorrow; triumph and celebration; risk, sacrifice, courage and valor. As Thom shared with me, there really is a brotherhood of American military and SEALS in particular. These guys don't leave each others' sides. They're not afraid to die for their country. They don't flinch from a fight. And they don't whine or brag. In other words, they are real men amongst men.

Let me set the stage for the story Thom wants to tell. It's Kandahar province, southern Afghanistan by the Pakistan border in July of 2009. Blisteringly hot around the clock; dusty beyond belief with a terrain that makes the moon look smooth, this troubling land was riven with enemy fighters filled with hatred for America. Thom and his six other SEALs have received orders to rescue another Special Forces team cornered by presumed Taliban forces in a mountainous region of that malignant, impregnable country. This was Bravo Platoon, SEAL Team Seven at their best. 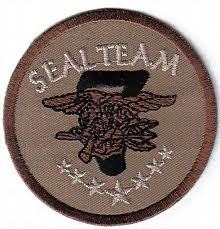 "We had two hours to prepare for this rescue," Thom began. "A Special Forces ODA (Operational Detachment Alpha-Green Berets) team was pinned down in the mountains. There were eight Green Berets and 12 Afghani commandos (trained by the Green Berets) fighting and one of our soldiers and two Afghanis were KIA. Pretty quickly, we hopped on a 'helo' (a MH-47 Chinook helicopter) and were on our way in the dark of night." 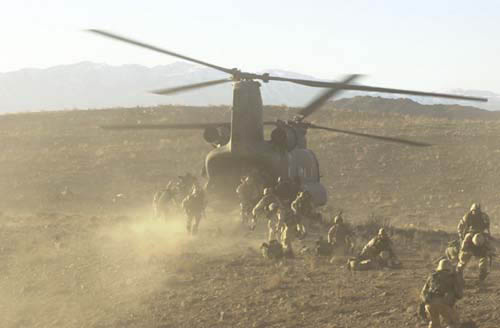 What Thom's SEAL Team Seven helo must've looked like in the mountains that night. 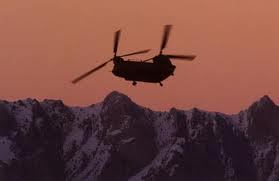 "We had to fly about an hour and a half in the pitch black darkness and you never fly in a straight line, the helo has to zig-zag because it's not good tactics to fly in a direct line."

"We had to be inserted on a narrow mountain ridge at 11,000 feet," the SEAL Chief continued, "it was about 10 feet wide and 18 feet long. We had to do a 'ramp exit' because the helo couldn't touch the ground and it was very dangerous. As I hit the ramp, a strap from my rucksack got caught on the ramp bringing me down and all my men rushing out behind me--we all tumbled out onto the ledge and almost fell below. As the helo started to leave, its wheels were on top of me as I lay on the ground and I felt it crushing my helmet and turning my head, almost twisting it clean off. I thought, 'well, that's it for me.' The helo jet thrusters started blasting and I thought they would melt me but the real problem was the jet blast was pushing the men off the ledge like dominoes. One guy fell to a ledge about 20 feet below ours and we used a 'human chain' (like Chinese acrobats) to get him back up with us."

"Once we were inserted, we then had to make our way to the area. It took us three hours to make it two miles--in the dark, with our night-vision on and we could hear the firefight going all the time as we walked. We advanced in a kind of oval where we were 10 yards wide and five yards deep. We were set-up with two snipers on the leading edge of the oval; two snipers at the back and three guys in the middle."

"There was all kinds of intelligence support; aircraft support; UAVs (unmanned aerial vehicles) and other special forces teams in the area to get our guys out so it was a real team mission. A UAV had been watching the target, so we knew what the status was the whole time as we approached."

"When we arrived at 6am it was 100 degrees. We quickly started setting up all our gear like the comms, links to other special forces in the area and setting up our snipers."

"Within an hour at 7am, we were set up and fighting which lasted all morning. For five hours we fought. By 12 noon, it was 120 degrees and no shade. And, we ran out of water." Let us investigate the conditions for Thom and his SEAL team: no water, no shade, 120 degrees and an unending firefight with enemy combatants who had already killed three. Not good. But SEALs aren't swayed by odds; or numbers of enemies; or battlefield conditions. They prevail.

The gear SEALs carry varies according to mission. Thom and his team carried more than 100 pounds each of extra gear for this mission. Using an MK13 Accuracy International .300 Win Mag sniper rifle with a Nightforce BEAST 25x rifle scope and 220 gram rounds, Thom was the lead sniper. SEALs typically carry an M4 (like an M14) with approximately 120 rounds of ammunition; several demolition charges in case they "need to blow something up;" two fragmentation grenades; six liters of water and 24 hours of food. 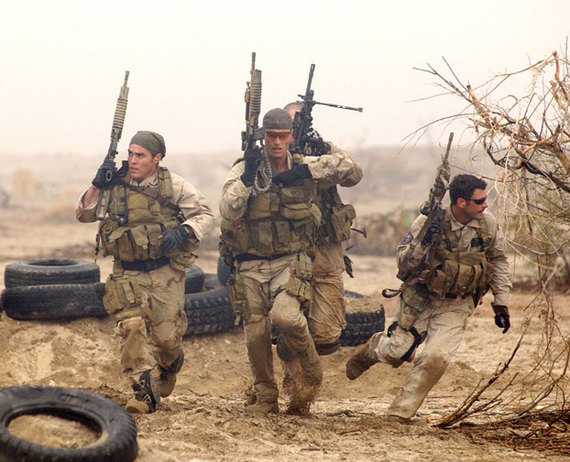 Meanwhile, back at the office, now fully set-up and operational, Bravo platoon is starting their day. There was no coffee, doughnuts or cushy staff meetings involved. It was rough beyond belief but this is the kind of life-risking sacrifice these men make every minute they're serving in a dangerous land. I'm sure Thom and his men handled it like just another day at the office. "So our job now, is to kill people around the special forces we're trying to rescue--this is the reality of what SEALs do. We took out 14 enemy combatants." And that was just after a 4-hour morning's work. But a busy SEAL doesn't have time to rest on their laurels or be congratulatory. There was another nagging, life-threatening problem remaining and it--or he--would not be easily eliminated.

"We'd been trying to take out one last enemy sniper for several hours and it was critical we get him because the helo can't land with an enemy sniper in the area. These were serious enemies; as we later found out from the intelligence sweep after the battle. Some were Chechen fighters who'd been contracted to fight us and they had received perhaps three years of intensive training. So these weren't just guys off the street who'd picked up guns." 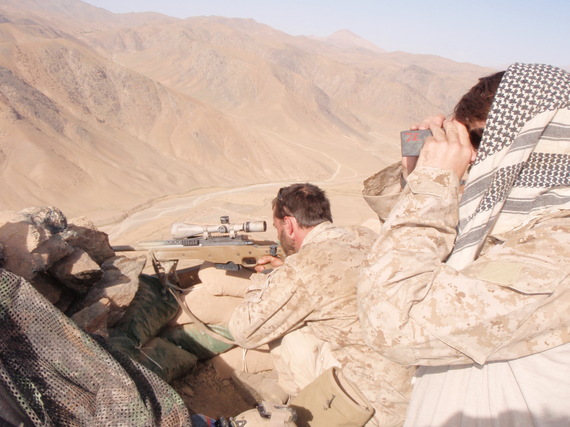 Thom and his spotter wait, and wait and wait some more ... patiently

"I spent more than four hours just watching the area, looking for that remaining sniper. Every once in a long while, I'd see him stick his head up but I couldn't get a shot; he'd completely disappear again. We were all totally dehydrated; there was no water; we were exhausted and hungry because we were avoiding eating as it that makes you thirstier if you eat. We'd take turns asleep on our guns, just nodding off because that's what you do when you're that tired."

"Finally, as the sun was going down and we faced the possibility that we would have to spend the night out there, I got my wind and distance factors on the sniper: 1200 yards and about 10 miles per hour from right to left. We got info from the helo that they were 30 minutes out and we must get this last sniper to get our men out of there. It was a real deadline. I then saw where the enemy sniper's rounds were landing and he popped his head out for just seconds. And I squeezed off the shot."

Here's what Thom saw as he lined up his momentous shot to end the battle and free the US Special Forces under siege: 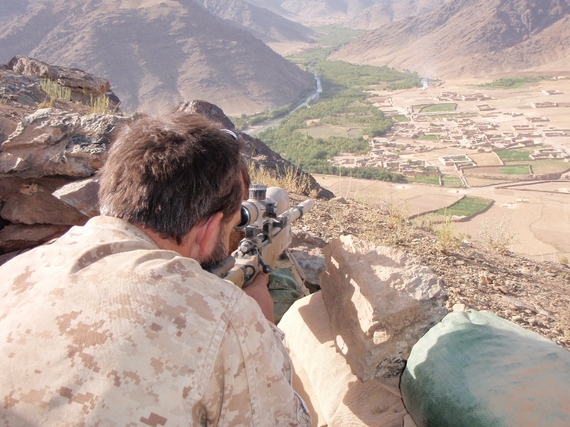 Thom's target, the last, intransigent sniper was in the cluster of buildings to the left

"This photo was taken two seconds after I fired."

"I didn't see the sniper at the site but did see him back at the base. I got him right behind his left ear and the round came out his neck."

"The helo went in and rescued the special forces team just as it was getting dark." Mission accomplished, as they say.

Thom Shea and Bravo platoon weren't done yet however. "We walked a mile more up the mountain, where the helo extracted us from the mountaintop," Thom concluded.

Thom Shea and his wife Stacy have three children and live in Greenville, South Carolina. 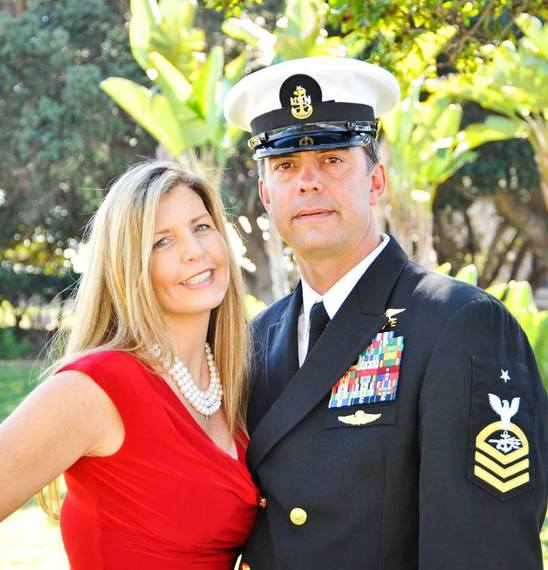 "Unbreakable: A Navy SEAL's Way of Life" is Thom Shea's new book and is available on Amazon and Barnes & Noble.