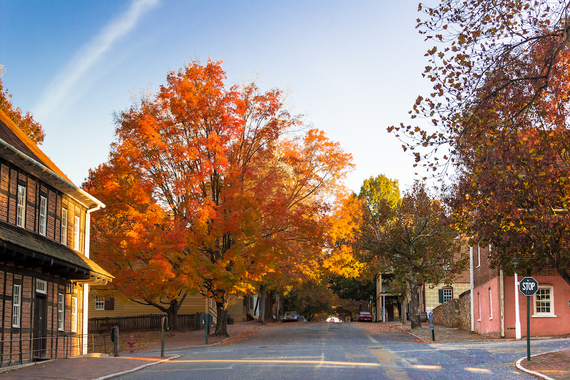 Back in 1977 on our 14-week transcontinental honeymoon, as my wife and I approached the outskirts of Winston-Salem, the smell of cured and roasted tobacco drifted through the air and got stronger as we got closer to the city. The aroma was sweet, like the burning of leaves in autumn, and instantly recognizable.
In those days Winston-Salem was dominated by the vast holdings of The R. J. Reynolds Tobacco Company, which in the 1940s employed 60 percent of the city's workers, who nicknamed the town "Camel City" after the company's best known brand. Today that tobacco aroma is gone, and the cigarette factories are, too. But Winston-Salem had always had so much more that its people could build on, so that today it's one of the loveliest and diverse cities in the South, with about 250,000 inhabitants. 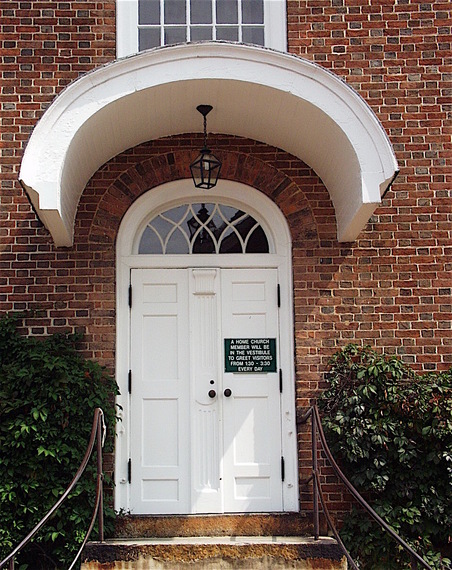 Salem dates back to 1766, when it was founded as the central town of Wachovia, the Moravian tract of 100,000 acres in Piedmont, North Carolina, dating from 1753, and the preservation and restoration of the little town still goes on as Old Salem Museums & Gardens, built around Salem Square and expanding outwards to include a passel of trim, wood, brick and half-timber structures, and others a mix of styles that evolved over decades, like the 1800 Home Moravian Church (left).
The connection to the name "Winston" derived from Revolutionary War figure Joseph Winston. who had lived nearby. Only after incorporation in 1856 were non-Moravians allowed to live in the town of Salem; in 1913 the "Twin Cities" consolidated as "Winston-Salem." 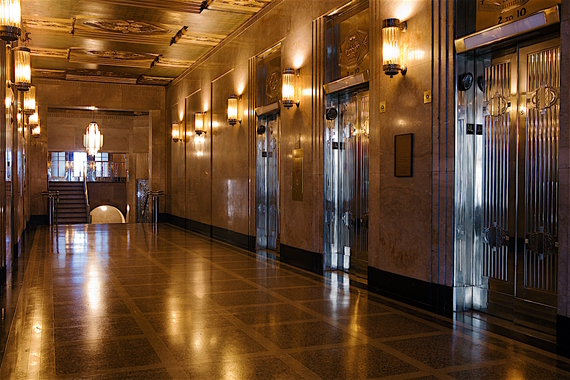 The well-drained soil and warm climate in this part of North Carolina were ideal for tobacco farming, so in 1875 Richard Joshua Reynolds, a Virginian, erected his first factory, quickly followed by forty more, so that despite the onus that tobacco production now suffers under, North Carolina is still the largest produce. Its stunning art deco headquarters (above), erected in 1929 just as the Depression hit, was the tallest building in the country south of Baltimore.
When tobacco and textile industries began to wane in the 1970s, the city wisely decided that its future was in the medical, hi-tech, and bio-tech industries, led by the Wake Forest Innovation Quarter; the Wake Forest Baptist Medical Center is today the city's largest employer. 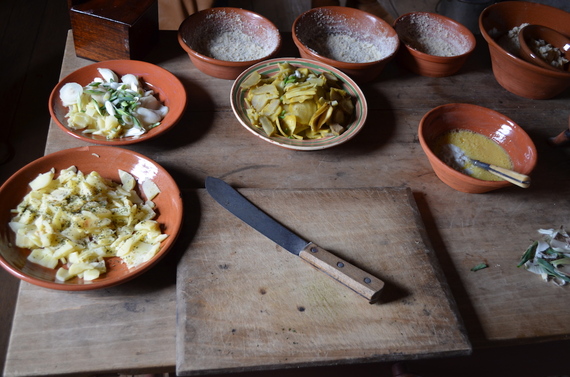 The principal touristic draw to the city is the wonderful Old Salem Museums & Gardens, now celebrating the 250th anniversary of the town's founding, a true restoration rather than a recreation like Williamsburg, Virginia. It is easy enough to navigate on a self-guided tour, poking your way into the solid old buildings, traversing the grounds and the remarkable gardens that evoke the significant horticultural advances of the Moravians from 1766 to 1856. Each dwelling had its own fenced-in garden area, and they flourish with historic plants and open-pollinated heirloom vegetables, herbs, flowers and fruit trees; careful attention is paid to preserving their diverse seeds for future generations as well as sharing them with other horticultural programs.
The Old Salem Winkler Bakery is still in operation, and you can buy their bakery products just minutes off the heat, the air perfumed with the smell of yeast and brown bread. In other buildings, like the Miksch House (below), there is a good deal of cooking going on by women in period dress, where you may watch lessons in traditional Moravian foods cooked with resolutely Moravian methods and utensils.
While slavery had been tolerated in Salem, by 1822 the town had its own African Moravian church, now part of the St. Philips Heritage Center, from whose pulpit a Union Cavalry Chaplain announced the emancipation of slaves on May 21, 1865.
There's much more to see throughout Old Salem--the magnificent Tannenberg Organ, here for more than two centuries; a book and gift shop; a hat shop that sells pottery and handmade baskets as well; a gunsmith shop, and the Museum of Early Southern Decorative Arts that exhibits the story of the South through its furniture, ceramics, silverware and artwork. 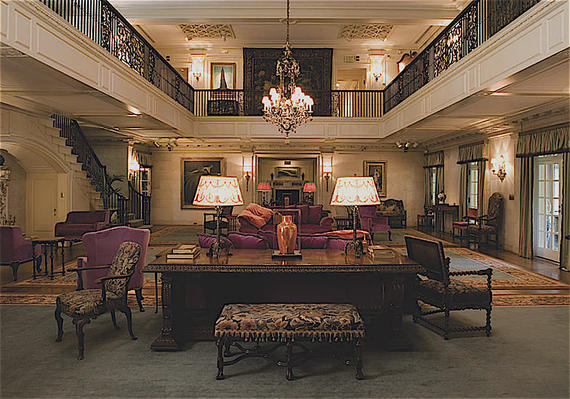 One of the most unexpectedly grand sites to visit is the Reynolda House Museum of American Art (above), once the 1917 home of the R.J. and Katharine Reynolds family, which had for so long dominated Winston-Salem. Rambling over landscaped gardens and greenery, up and down staircases through vast rooms of exquisite design and antiques, the edifice also houses one of the most extraordinary privately acquired collections of art in America, so when you enter any room you come face to face with some of the most famous artists' most famous works--Copley, Cassatt, Church, O'Keeffe, Eakins, Grant Wood. 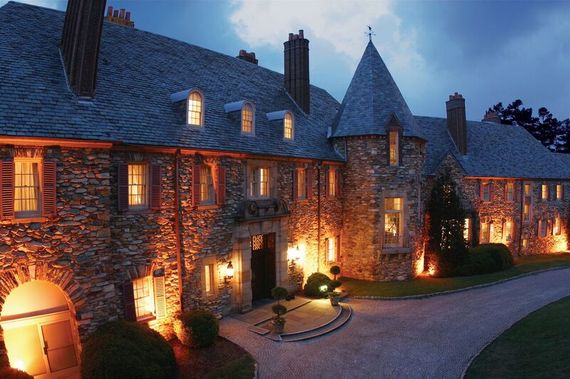 You can actually stay and dine in the Graylyn Estate International Hotel & Conference Center (above), once the baronial home of Bowman and Nathalie Gray, he a former president of R.J. Reynolds, spread over 55 acres and now owned and managed by Wake Forest. Its mix of architectural design includes everything from Medieval towers to homes that look like English country manor houses; the interior is full of imports like the 15th century French carved doorway and Louis XV paneling, renaissance fireplaces and suits of armor, and extraordinary wrought-iron staircases under a soaring cupola. 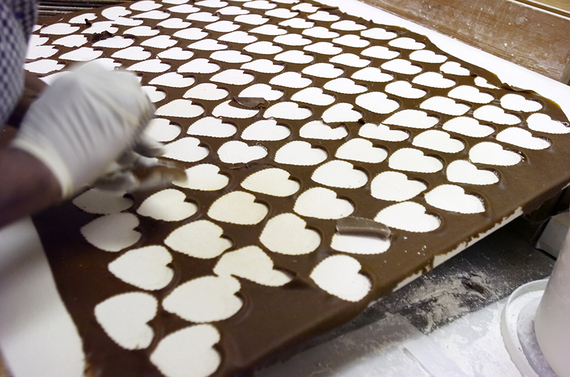 Certainly not last among Winston-Salem's pleasures is the opportunity to see the preparation and baking of the paper-thin cookies at Mrs. Hanes' Moravian Cookies (below) in the Friedberg Moravian Church community. Here, after seven generations, Evva Hanes oversees two or three generations of exceedingly dedicated, hair-netted women who appear to have stepped out of "American Gothic." They stand at their tilted tables, working gingersnap, molasses, lemon, chocolate and walnut dough into near-sheer sheets, always the same precise thinness, then they cut them out with their own treasured stamps to be baked so that the little factory always smells like Christmas. One hundred ten thousand pounds of dough goes through their hands, some packaged weeks in advance of the barrage of holiday orders and shipped all over the U.S. and to 30 countries abroad.
There is, then, a great deal of history about Winston-Salem that extends beyond the indelible footprint of the tobacco industry, which by fading in importance has allowed the true substance of the city to shine through in all aspects of Southern hospitality.