I don't know about you guys, but after watching the "American Horror Story: Coven" finale (code name: The Witchlympics) I'm really revved up for some competition. It's fun to imagine a parallel universe where an event like the Seven Wonders trials could replace the Olympics as the international standard of excellence. Watching witches and warlocks face-slap each other to victory is something I can fully get behind.

Anyway, so, Cordelia. Let's see what I said her odds were last week:

I feel like this is a possibility, only because she's Fiona's daughter and it seems almost rightful that she be in charge. She loves the girls and loves Robichaux, and is only now starting to come into her own. Also Ryan Murphy's infatuation with Paulson might make her top dog.

So I wasn't way off, and really, it's the safest, most satisfying outcome -- a Fiona rise to the top would have been something to behold, even though she didn't deserve it. Knowing Murphy's love of Paulson, Cordelia's ascension to Supreme doesn't come as much of a surprise. I predicted Cordelia becoming the next Supreme for the first time after Episode 6. One thing I didn't see coming was the awesome return of Stevie Nicks (I knew she was coming back, but didn't know it would be good). She seems to have woken up from her coma.

It was almost sensory overload watching the introduction to tonight's finale, with Stevie Nicks wandering around Robichaux, singing "Seven Wonders" to the witches about to engage in the Seven Wonders test/Witchlympics. I can honestly say, at the start of my "Coven" recapping, I never would have predicted the finale to start like this. Random folk-rock singer serenading/lip-synching to a house full of witches practicing spells? Bizarre, for sure, but also very entertaining. And there was twirling.

One thing in particular about this finale was the pacing. It was lightning quick, with no time for meandering; it shows just how bloated the rest of the "Coven" thru-line was, with too many extraneous characters and tangents. If only this season as a whole had concentrated more inwardly on the Academy and the witches within it. This finale was focused, with a solid plot, even though the outcomes were as eye-rolling ridiculous as the rest of the show; but this was probably my second-favourite episode of the entire season. The writers had no choice but to choose someone for Supreme. No. More. Delays.

The various magic tests were a pleasure from start (Myrtle and her "last supper") to finish (Cordelia taking her rightful place as Supreme). Particularly fun to witness were the respective Hells for each of the girls: the fried chicken joint for Queenie, Madison getting a role in the live version of "The Sound Of Music" -- as Liesl (ha! ouch!) -- and Zoe in a perpetual break-up with Kyle. Ugh, Zoe, even your Hell is boring. The saddest, obviously, is Misty's Hell, and she never gets to escape! She's trapped forever in a science lab, forced to cut open a live frog over and over. Seriously, that's Hell for anyone.

Another great Witchlympics event was Transmutation Tag, where the girls -- shocker -- have fun with their powers. (I say "shocker" because we sat around for 10 out of 12 episodes navel-gazing while all this potential magic fun just wasted away.) It was nice to watch, but was again a glaring reminder that the young witches never really enjoy, or ever really use, their spells. Zoe's impaling on Robichaux's wrought-iron gate happened so fast that it momentarily robbed me of breath (not kidding!), even though Cordelia kinda-sorta saw that in her vision. With Zoe and Misty out of the running, we're down to Madison and Queenie, and since Queenie can't resurrect Zoe and Madison refuses to, there's really only one logical choice left, and that's Cordelia. Once Madison fails the divination part of the Witchlympics, she storms off and leaves Cordelia to take the throne. She, of course, brings Zoe back to life (and makes Queenie dance!). And Kyle, of course, strangles and kills Madison. (Anyone else think about this now-engaged couple's dust-up in real life while watching this scene? Art imitates life, or so they say...)

Thank goodness Cordelia's new Supreme powers get rid of those red eye sockets. Geez, it was hard to even look at the screen. We get a nod to "AHS: Asylum" when Cordelia's being interviewed for TV. Memories. Oh, how I miss Lana Winters. But new Supreme Cordelia has her awesome qualities too: she's hard-ass, gorgeous and rejuvenated, and she relaunches Robichaux as a worldwide success. (Email her at Cordelia@RobichauxAcademy.com! I tried, and got no bounce-back.)

After we say an absurd goodbye to Myrtle (which, c'mon, was totally unnecessary -- but it had to happen so we could hear her last word, "Balenciaga!!!" and watch all the witches make one last procession to the old burnin' stake), we have to have our last scene with Fiona, who's obviously still alive, smoking and brooding in the corner of the Robichaux sitting room. Balding Jessica Lange looked so much like Jon Voight I just had to make a split-shot: 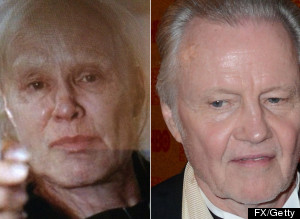 The final exchange between Fiona and Cordelia was touching, though still strangely suspenseful. I don't trust Fiona one iota, so I was half-expecting her to stab Cordelia with a shard of glass. I have to hand it to Lange; her performance this season ... oh hell, in all the seasons of "American Horror Story" ... have been epic. Paulson, too. Watching the two of them hug, one frail, used and wasting away, the other vital and practically glowing, was a lasting image that would have encapsulated the series if they hadn't made a joke out of everything by taking it to the most ridiculous level. Mother-daughter love, despite all of Cordelia and Fiona's literal attempts to kill each other, was a strong theme on "Coven," but just like the half-handed attempts to address racism, sexism and ageism (and even "different" kids in this episode -- they say "witches" but they mean "LGBT kids"), we barely scratch the surface. If anything, "AHS" has a unique capability among current TV shows: since it's based so strongly in fantasy (I couldn't make this stuff up if I had 10 hits of LSD), it would be simple for the showrunners to use metaphor and imagery to address serious issues of our time. Instead, we get Myrtle one-upping herself every episode or Lance Reddick dressed like a Mardi Gras reject.

We get as close as we can to sealing the mother-daughter love loop when Fiona dies in Cordelia's arms and ends up in her Hell, which is a fishing cabin with The Axeman for all eternity. Ironically, this is his heaven. Her disgust with the knotty pine walls -- as if that's the worst part about it -- and her statement "This is Cordelia's work!" made me shake my head. Oh Fiona, have you learned nothing? I guess her situation is pretty hellish, but wouldn't a more apt Hell for Fiona be a place where she's perpetually old? Or decrepit? I dunno, she was having fun with The Axeman and talking about running away with him two episodes ago. I don't know why I'm complaining about this now. The moral of the "story" is a lifetime of evil ultimately gets punished (Fiona, Marie, Delphine, Madison), and the good souls (Cordelia, Zoe, Queenie) get a reprieve. Misty is the odd one out, who didn't really deserve her rather brutal non-ending. (It's actually kind of baffling that the writers did that to her. From what I've seen online, Misty was one of the most popular characters.)

I'm a bit sad to say goodbye to all these witches, but we'll see many of the actresses back in their new forms for Season 4, whatever they may be. Communists? Stepford Wives of the 1950s? Aliens? Roswell workers? So many possibilities. I just hope the showrunners regroup and work on a solid plotline for next season. And yes, no matter what, I will be watching. Perhaps recapping, too. I've had a blast writing these for you guys this season, and I'm always happy to share with such an engaged, thoughtful audience. Hope you've had as much fun/rage/laughs as I did!

Witch, Please: (every week I'm going to award the witchiest witch of them all) You know it's Cordelia. She can do it all!

(Read what my HuffPost TV colleague Mo Ryan thought about this season of "American Horror Story" -- we tend to have a mind-meld about these things, so whatever she thinks, I usually agree with her, and this is no exception)