We're just barely into the fourth season of "American Horror Story," but fans are eagerly trying to figure out what will happen next season.

(Spoiler alert if you don't want to know even the mildest speculation about Season 5.)

Ryan Murphy has said in multiple interviews that clues regarding the fifth season are scattered throughout the first few episodes of "Freak Show." In his most recent interview with Entertainment Weekly, Murphy confirmed a major clue that has since set off a whole slew of theories. In Episode 4, "Edward Mordrake (Part 2)," a cop hands Emma Roberts' Maggie a coffee cup with a top hat printed on it. "That is a big season five clue!" Murphy told EW of the top hat. "It’s an arcane clue, but it’s very purposeful, and it illuminates something that you’ll be like, 'Oh! You dirty [bastard]!'"

Avid fans on Reddit have since discovered two other appearances of the same top hat this season. The first two are in Episode 2 when a close-up shows the hat on two coffee cups held by the assistant at the local toy store.

The second time the hat pops up is in the diner scene when Evan Peters' Jimmy takes the "freaks" out to eat. The top hat can be seen on the front of the restaurant menus -- it seems that all of the coffee cups are coming from what looks to be The Top Hat Diner. Let's also not forget that Edward Mordrake wears a top hat.

Redditor ace_VXIII posted a fan theory on the series' subreddit last week that seems to be the most convincing one yet. This one proposes that the top hat may signify Operation Top Hat, a "local field exercise" that occurred in Alabama in 1953, one year after the events of "Freak Show." The operation involved the United States Army Chemical Corps testing biological and chemical weapons, mustard gas, and nerve gas for decontamination. However, the experiment was never submitted to the Secretary of the Army for approval and those involved in the tests were supposedly not informed of the circumstances. This sounds like creepy, secretive "AHS" material if you ask us. 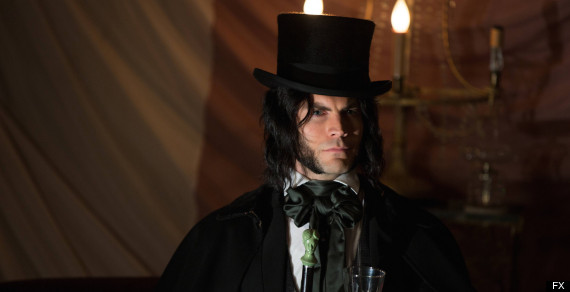 The theory suggests that if the top hats do relate to the 1953 operation, Season 5 could deal with human experimentation in addition to government conspiracies and extraterrestrials, which has also been a popular fan theory. The nuclear testing suggestion has also been supported on Reddit when users noticed the mushroom clouds behind Jimmy earlier this season and connected them to Area 51 and Mercury, Nevada, where there was nuclear testing beginning in the '50s. These theories then spurred a "Hills Have Eyes" theory about such experiments leading to mutants. Could all of these be connected in some way, and most specifically, could they relate to Pepper? Let's not forget that Pepper was abducted by aliens in Season 2, and Murphy has said that all the seasons are connected.

Many of the fan theories related to Area 51 and aliens have used (supposed) clues from "Freak Show" to predict that Season 5 will take place in space -- there's Elsa Mars' surname, the fact that she sang Bowie's "Life On Mars," and other various space-related imagery. But Murphy has outright denied those claims, saying the next season is "land-bound and takes place in the United States." Before Murphy revealed the top hat clue, he previously said all the fan theories he'd read online were wrong. We wonder what he thinks of the Operation Top Hat one.