Wrapped in the "bucket of blood" theme from Brian De Palma's Carrie, intrepid young reporter, Lana Winters (Sarah Paulson), ascends a large wooden winding staircase at Briarcliff Manor, a stereotypical Catholic criminal mental institution in the early 1960s, hoping to get a story on a new inmate, a serial killer named Bloody Face. As she climbs level after level in a spinning, dizzy sequence, she's surrounded by an outcast of "crazies" pulling her into a queerer world -- like Dorothy sucked up into a vortex and dropped into Oz. For those of us familiar with the song's use in Carrie, it feels detached hearing the music without Piper Laurie's haunting words, "they're all gonna laugh at you" underscoring the slow-motion insidiousness of Carrie's classmates. The tension is so tight -- like stretching back a rubber band -- that anticipating the moment in which everything snaps becomes exhausting. 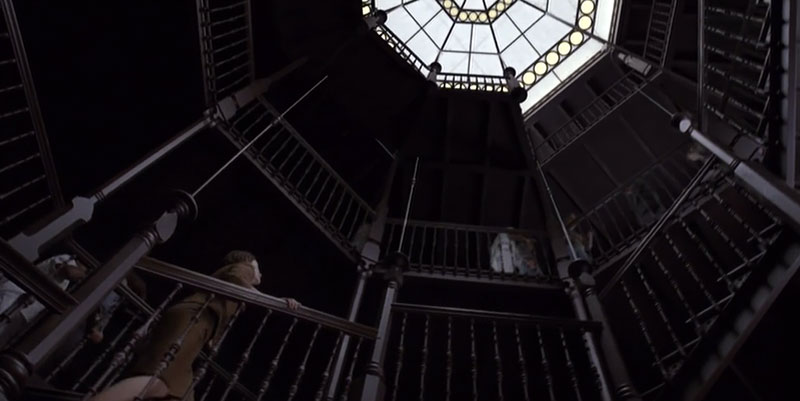 But even if you're unfamiliar with Carrie, living in this music and scene alone is the premise of this season of American Horror Story: Asylum. When she reaches the top of the staircase and meets the matron nun, Sister Jude (Jessica Lange), punishing a promiscuous woman, she learns Briarcliff's ideology in one phrase "Mental illness is the fashionable explanation for sin." As a closeted lesbian, "sin" hits Lana hard.

AHS drags us into the dark world of a mid-century mental health system, the disparity of deviancy and homosexuality, and the under-shadows of the Catholic Church with exorcisms in tow -- a kind of 1960s that Mad Men could never invoke. Still, these two series do have fascinating intersections, namely the parallelism they draw with the present day as well as the way they, like Carrie, depict utter alienation.

Beginning in the modern day and flashing back to the past, an inverse from last season, the present is used in the first episode mostly as an expositional device to explain the importance of the Briarcliff in a way that is obvious without feeling heavy handed. The horror in this season, much like last season, is tied to place. A now-abandoned Briarcliff, said to be one of the most haunted places in the world, was where the criminally insane were brought in the 1960s; 46,000 people died there; its most famous inmate was Bloody Face; once people were admitted, they didn't make it out alive; and when the good Lord did see fit to take them away, it was through a secret tunnel in Briarcliff's bowels called the "death chute."

But let's not forget this is a Ryan Murphy production (read: Is Ryan Murphy an Activist?), and while the narratives of his series are rarely consistent, you can always expect that every episode will be drenched in an "after-school-special" goo. Lana Winters is a lesbian with, what my grandmother in the '60s would have called a "live-in" lover, Wendy (Clea DuVall), and a pre-serial-killer Bloody Face had secretly married an African American woman before he was abducted by aliens (allegedly). Murphy braids together these two storylines because both homosexuality and miscegenation (black/white marriage) were illegal in many states at that time, and in doing so, tugs on the decades-old tradition of "marrying" gay civil rights and black civil rights. Or perhaps more problematically, tying "civil rights" to marriage itself.

While these lessons feel like they take place in classrooms on Glee and The New Normal, what makes AHS truly appealing is the way it sets up a queer world beside but apart from our own world, where we can go to freely criticize the mores and systems of oppression that bind us without fear of prosecution for our speech. This notion of a sideways world, what Mikhail Bakhtin famously called the "carnivalesque," pulls us not just out of place in AHS, but also out of time, even if it sets up that world as the only allowable site of transgression.

As children of television, we are wont to believe that what we see on TV accurately reflects what's happening in the era. When you think of the 1950s, you might call up images of I Love Lucy or The Honeymooners to color in what you might never know -- what life was actually like in the 1950s. Out-gay men didn't show up on national primetime television until the late 1960s, even while inexplicit characterizations of them had been present since the earliest days of radio. Lesbianism, however, was remarkably more stigmatized than male homosexuality (something that more or less changed with the onset of AIDS) and almost entirely invisible in broadcast. Implicit lesbian characters, such as Miss Brant, a lesbian sniper in The Asphalt Jungle (1961) or a mentally despondent Hallie Lambert, The Eleventh Hour (1963) set up the two tropes lesbian representations would follow well into the mid 1980s. To conservative of minds, homosexuality was a damnable sin, but even to the most liberal of minds, it was still presented as an illness. 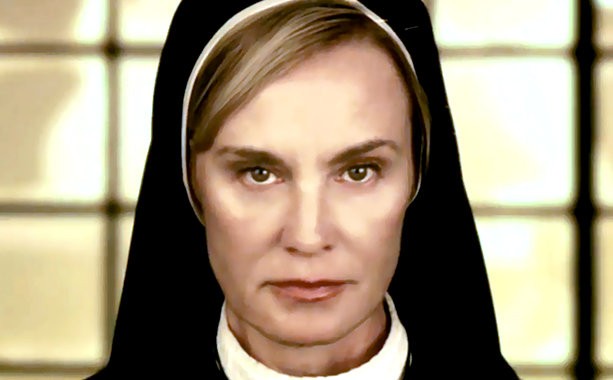 In Murphy's sideways world, however, we get to go back to the 1960s and fuck with that system. Yes, we have a representation of a lesbian in a mental institution, but the sickness isn't with Lana and her homosexuality; she is a well-adjusted, if closeted, lesbian woman who is involved in a committed homophile partnership ("gay" was more pejorative back then). The sickness lives instead in the heads of the religious wack-jobs locking her up and tying her down. In this sideways world, we're invited to witness a different kind of experience of the 1960s, from a queer positionality that demonstrates how lesbians may have felt -- tied down and prosecuted by the majority and the media -- thrust into a burgeoning gay rights movement hoping to challenge these dangerous characterizations. Meanwhile, the parallelism of the series suggests that this fight is far from over (even if Murphy is, himself, often complicit in the same archetypal oppression for other queer identities).

If you take nothing else away from the show, I hope you'll become more sensitive of other oppressed queer individuals today, considering the anguish and alienation lesbians must have felt looking for themselves on their television screens and seeing reflected back only that their sexuality would lead them to kill or cry out their final days strapped to a cold metal table in an asylum.