The rebels were allegedly holding at least four American citizens prisoner in Yemen, according to a report last week by The Washington Post. A U.S. State Department official confirmed on Sunday to Agence France-Presse that several Americans were indeed captive in the civil war-torn country, although they did not specify how many prisoners were being held.

The Washington Post withheld some details on the captives over concern for their safety, but its report states that three are thought to work in private sector jobs and that a fourth is a dual U.S.-Yemeni citizen. It's also believed that one of the four was cleared to be freed last week but that the Houthis did not go through with the release.

U.S. officials told The Washington Post that there's no sign the prisoners are being physically harmed, nor are they being treated as hostages. 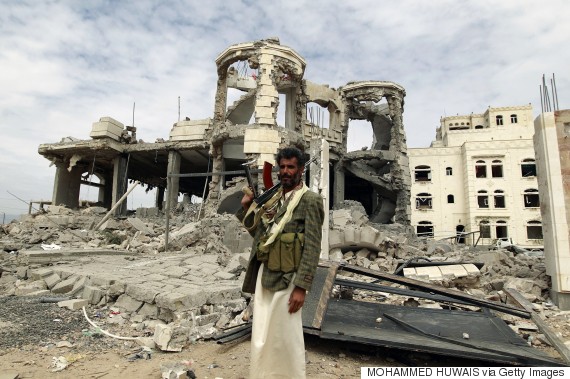 A Huthi militant poses next to a house destroyed in an airstrike in Sanaa on May 29, 2015. (MOHAMMED HUWAIS/AFP/Getty Images)

The Houthis have waged an insurgency for years against Yemen's government, but fighting drastically escalated in 2015. They now control much of the country, including the capital of Sanaa, after ousting the U.S.-backed President Abd-Rabbu Mansour Hadi.

The Houthi takeover has resulted in clashes between their group and government loyalists, and spurred Saudi Arabia-led coalition airstrikes in support of restoring Hadi. Around 2,000 people have been killed in the fighting since the strikes began in late March.

Senior Houthi leaders and U.S. officials met for the first time in Oman on Sunday to discuss movement toward peace talks and an end to the conflict, Reuters reported.

The Washington Post report states that the U.S. had primarily gone through intermediaries in attempts to secure the prisoners' release, with no formal contact between the groups said to occur until now.

Previous calls to establish a lasting ceasefire failed last month, and aid groups say that the humanitarian crisis in Yemen is rapidly getting worse.