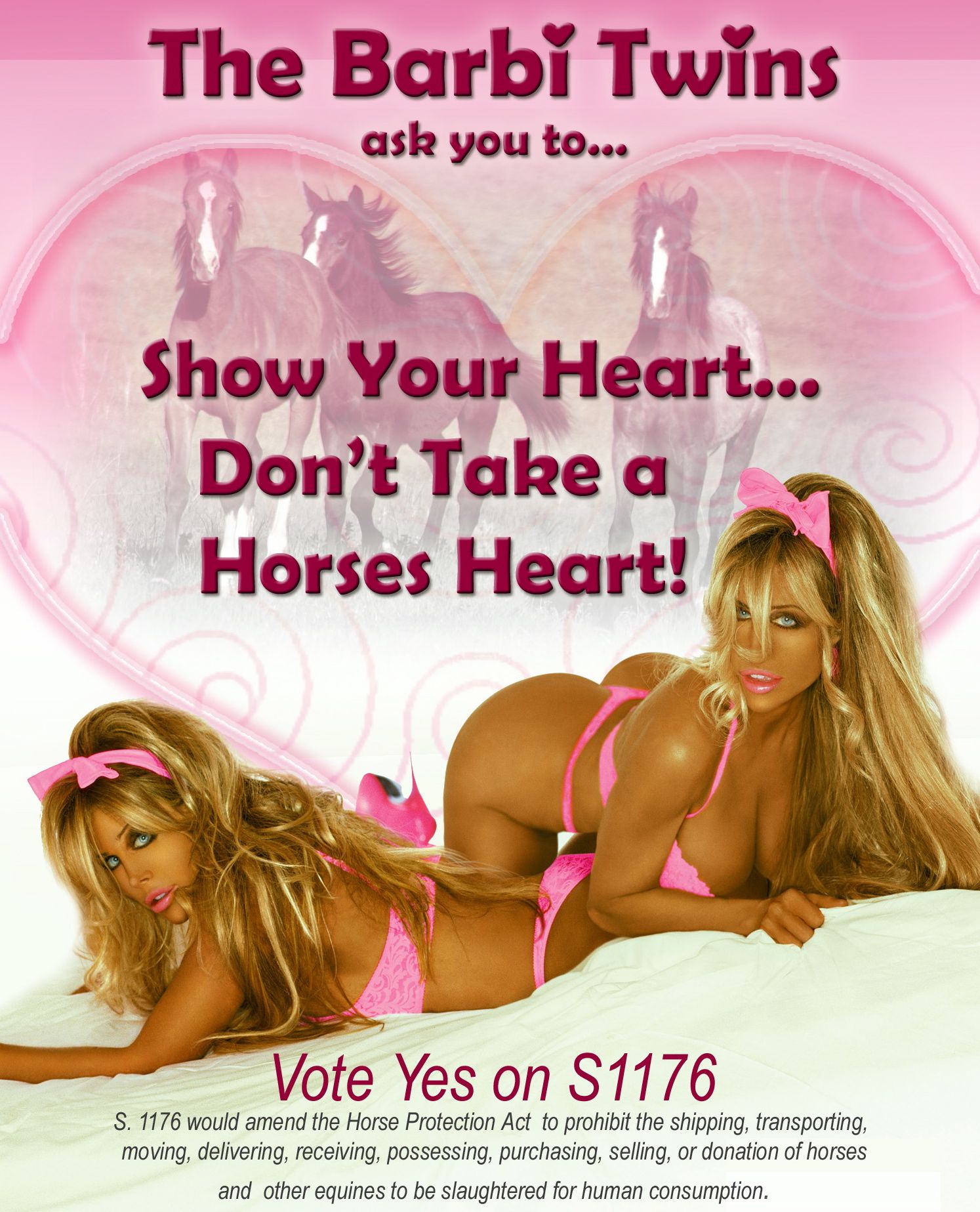 America has really upped its love affair with animals in recent decades. We finally realize they are sentient beings who indeed think, feel, and reason. We all shudder thinking about the Westerns made in the golden age of Hollywood, where hundreds of horses were brought down in battle scenes and chases with trip wires, which crippled them, and often forced them to be killed (I don't say "put down." It's "killed." "Put down" would be, "Your mama's so ugly her jockey wears blinders".) From Sunday's front page New York Times article, to the recent bill signed by President Barack Obama allowing the slaughter of horses in the U.S. for human consumption, to Sunday's Los Angeles Times article, to HBO's cancellation of its freshman series Luck, horses have been dominating the headlines and talking heads news shows. Who is responsible for the welfare of all animals on TV, video, commercial, etc., and movie sets? Who monitors not only the safety of dogs, cats, etc., but also gives out the "Good Horsekeeping" Seal of Approval: "No animals were harmed in the making of this motion picture®"? That is the purview of the American Humane Association (AHA).

The AHA is no stranger to controversy. I remember when at least a decade ago they underwent a thorough revamping due to revelations at how they were being run. Their agreement is with the Screen Actor's Guild to monitor animals and the actors and trainers dealing with those animals on set. There were high profile horse deaths in the movie Flicka (and others) where thorough investigations by L.A. Animal Services after the fact contradicted the claims of AHA that the animals' deaths were unpreventable. Even more so, we all have many actor friends who come home after shooting with animal stories that are horrific. An actress friend of mine related this story to me:

They had to throw a cat in a river, who would come up humorously like a little hero and get out and continue on his determined way. They had a dozen cats on set that day, to replace the ones that didn't come up as they tried to get the scene.

Now, the AHA is not always invited onto movie sets to monitor fair treatment of animals, where things like this can occur. But why isn't the movie industry forced to open its shooting locations to an organization that is there to advocate for animal actors? The industry isn't allowed to pick and choose which movies using young children it will or won't allow to be monitored. The vulnerable should be protected.

Yet how can an organization that is supposed to monitor the humane treatment of all animals on films, like elephants in the movie Water for Elephants, be the only organization that lobbied against a law preventing the use of the dreaded and barbaric bullhooks on elephants?

I am happy for and welcoming of any organization that is set up to help animals. I am sure the AHA does good work outside of its movie assignments. But look, they are paid by the big studios they are sent to monitor. Their livelihood depends on studios being free to expediently film what they need to get. If elephants or horses could pay them, you would see a fantastic amount of improvement in the way animals are made to do what they do up on the screen.

Sadly, the case is that this is more like Eliot Spitzer cleaning up N.Y. prostitution. WHEN he's invited in. There are simply better men for the job, and it should be mandatory. Animals deserve better. They want to please, and audiences want to take comfort in the knowledge that the antics they are enjoying were not tortured out of animals onscreen with a cattle prod, a bullhook, or a trip wire. Let the AHA continue all the other good work it does, and let's bring in independent organizations NOT paid by the big studios, to advocate for the humane treatment of animals in entertainment. Certainly the Animal Welfare Institute (AWI) would be a great start for horse protection, and we can go from there. Wouldn't it be great to see a line in all movie credits that truthfully says, "Nobody was harmed in the making of this film, and at the cast party, all animals got a belly belly belly rub".

If you'd like to know the truth about U.S. horse slaughter for human consumption, please visit the websites on this page, listed below, and then please urge your congressperson to vote for Bill S.1176 by calling 202 659 6000.

Finally, why did we use this Barbi Twins photo? Well, it got more of you to read about horses, and we thank you. Gotta love babes who use their powers for good.


Elayne Boosler founded and runs www.tailsofjoy.net, a nationwide animal rescue/advocacy organization. The Barbi Twins run http://twinbunnies.com/, advocating for all animals with a focus on horses.