Funny people love Jessica Anya Blau. And the consensus among funny people is that The Wonder Bread Summer, her magical funhouse of a third novel, is her funniest offering yet. Larry Doyle, author of I Love You, Beth Cooper and numerous episodes of The Simpsons, says, "This book will make you laugh and cry in public. Jessica Anya Blau has written a soaring teenage lament, perfectly pitched, containing the single saddest and funniest line of seduction ever uttered." Similar praise was heaped upon the book by Christopher Moore and Matthew Norman, who are no slouches at tickling the funny bone. Matthew Klam compared her to "the naughty Southern Californian soul mate of Nick Hornby," and he was right on the money, because Nick Hornby himself, in his column at The Believer, called it "top-notch comic writing."

I had the opportunity to catch up with Blau on her book tour, where she answered by questions on a flight back from Los Angeles -- where, if Hollywood has any sense, she will likely be spending some time in the future. 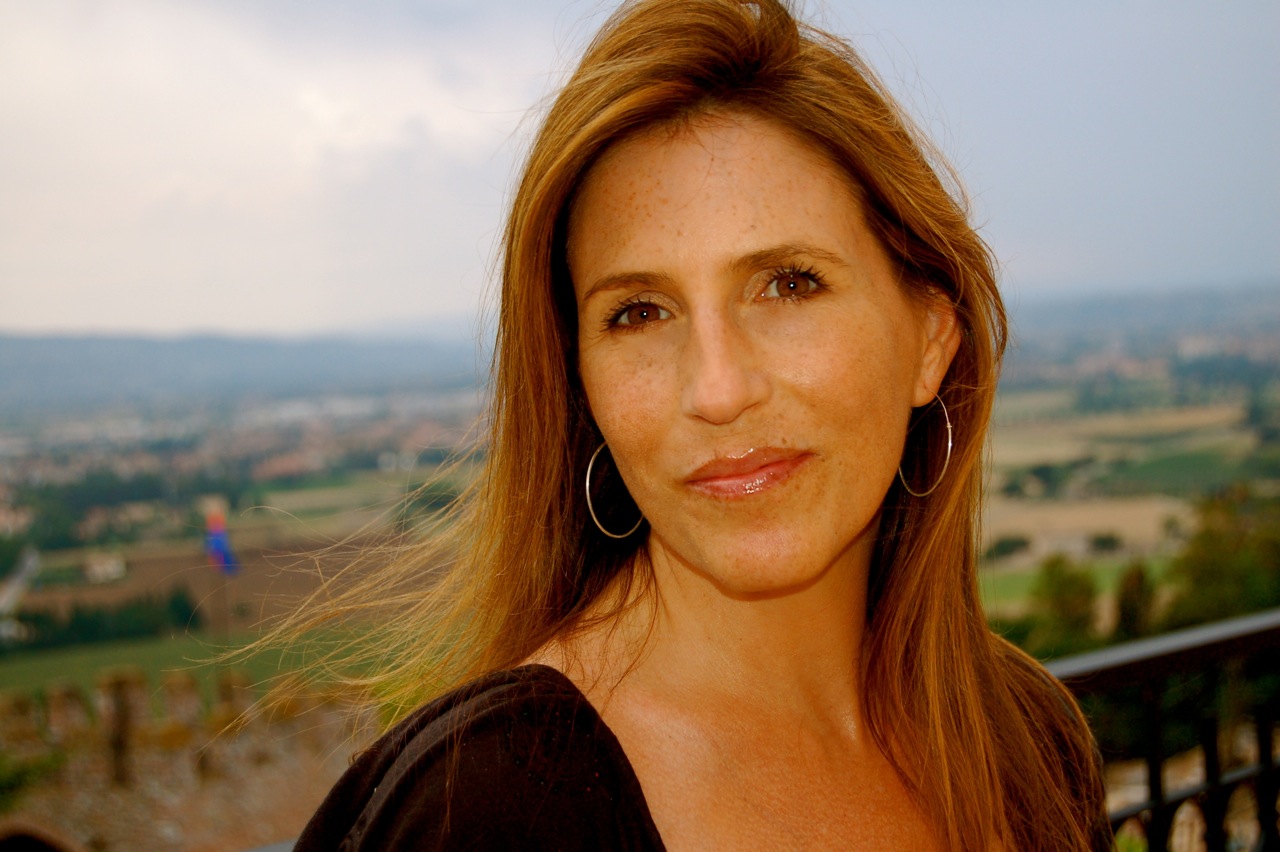 The opening scene of The Wonder Bread Summer takes place in the dressing room of a dress shop, when a coked-up coed is made to display her breasts for the priapic pleasure of the store's owner, who happens to be 1) a drug dealer, and 2) hung like a horse. (In contrast to the movie star you saw en déshabillé, who was pinky-sized). We know that your work is heavily informed by autobiography. Please tell us that part is fiction.

(Jessica Blau): Well, sadly, it is based on my real life. When I was in college I got a job at a little clothing boutique in a dumpy area of Oakland where nobody would ever go to buy a dress. It turned out the shop was a front for a coke dealer. And he liked to pull out his dick while I was working. He would lay it out on his palm and show it to me. I was young, eager to make people happy, a good worker, and so didn't do the reasonable thing (like tell him to fuck off and put that thing away!) and just tried to laugh it off and suggest he tuck it back in before a customer came in. Of course customers rarely came in, so it wasn't a persuasive argument.

"I'm a big, big fan of Jessica Blau's first novel," writes blogger Kevin Sharp. "I've just finished her newest one, and what struck me was that I wouldn't have EVER guessed that this is the same author. The storyline, the voice, the syntax all seem completely new... this is quite a talent in my opinion." I agree with him. Your previous novels, The Summer of Naked Swim Parties and Drinking Closer to Home, are more overtly grounded in autobiography, as we've discussed previously. The Wonder Bread Summer is much trippier. It's in many ways a departure for you. Tell us a bit about your creative process, and what drove you to write this particular story, in this particular way.

The first chapter of this novel is the body of a short story I wrote that was published in The New York Tyrant. I liked writing about the time period (1983) and I liked the place (Berkeley, Oakland), and I liked the character -- the idea of dealing with someone who was bordering on adulthood but still incredibly vulnerable. I was reading a lot of thrillers at the time so the novel sort of turned into a chase/thriller thing, but with the Southern California sensibility that I seem to have.

Alice in Wonderland allusions abound. Allie is Alice, Dodgson is Lewis Carroll's real last name, and California is, one presumes, Wonderland. Talk about your relationship with that book. When did you read it? What did you think then, and what do you think now? How do you feel about gyring and gimbeling in the wave?

My whole life is one giant gyring gimbel in the wave. That's all I do is roll around and muckle and fyskeel while gyring and gimbeling! Seriously, I wasn't thinking of Alice when I wrote the book. My agent pointed it out once the book was finished. I loved that she found that in there. In the next revision, I heightened some of the Alice things and added a few things like the nickname Queen of Hearts for my protagonist's mother.

One common link in all three of your books is parents abdicating their responsibilities. In Wonder Bread, of course, you take parental abdication to an almost absurd dimension.

I think none of us really know what is stuck on repeat in our sub- and unconscious. I guess parents who aren't parenting is one of the ideas I revisit in my work. One of my best friends in high school had a mother who left her family when my friend was five to be the tambourine girl in a band. Clearly that stuck with me. Allie's mother in Wonder Bread isn't like my friend's mother at all. But she did leave Allie to be the tambourine girl in a band. The band is named Mighty Zamboni, by the way. I think it's such a fabulous band name but I have to confess that I didn't come up with it. Geoff Becker, the novelist, did when he read an early draft.

I'd pay to see a Mighty Zamboni show. I'm sure they do a rollicking cover of "Cold As Ice." You grew up in Santa Barbara , you've lived in Baltimore for years, and before that you were in Toronto. What's your connection to Los Angeles? What does the city mean to you?

When I was a kid, Los Angeles seemed like a big, unmanageable city. Whenever we had visitors from L.A. they seemed cooler, hipper, more aware. Los Angeles was to me what Manhattan is to people growing up in New Jersey.

A place your parents taught you to be terrified of? Sorry. I'm an atypical Jersey boy.

I've never lived in L.A. but I've certainly spent a lot of time there. I'm one of the few people I know who actually loves it there. It's sunny, there's a beach, people are interesting, there's a lot going on. I'm also one of the few people I know who doesn't go crazy sitting in traffic. I like listening to the radio and I like looking at people in the cars around me. Sometimes I even prefer sitting in traffic -- it's a lot less stressful than trying to change lanes on a five lane freeway while going 65 miles and hour.

For the record, I also love L.A. The "maguffin" in your book -- not unlike the briefcase in Pulp Fiction -- is a Wonder Bread bag full of cocaine. I know from your interview with The Drinking Diaries that you do not imbibe. But what about drugs? What's your personal experience with coke?

The Wonder Bread bag of coke is based on a Weber's Bread bag full of coke that landed in my apartment one day when I was in college. It was a shocking sight -- so excessive, and dangerous even. As far as drugs go, I certainly had a period of time where I was willing to try anything. Everything I tried turned out badly for me. I don't have the disposition for drugs, I'm a complete lightweight. If I had one hit of hash today I'd probably want you to check me into the hospital and hold my hand through the night to make sure I lived to see the morning. So, yeah, I don't drink or do any drugs. That said, I like being with people who are relaxed and fun (I have an aversion to uptight and overly controlling people) so I'm always happy to hang out with people who are relaxing in whatever way they can. When there used to be smoking sections in planes, restaurants, etc. I would sit there because those were often the more interesting and fun people.

Nick Hornby did one better than blurb your book...he devoted an entire Believer column to singing its praises. On a scale of 1-10, where 1 is a slight headache and 10 is riding down Highway 9 with Bruce Springsteen, how excited were you when you read what he wrote? I mean, I know you're supposed to be all humble and stuff, but it's Nick Hornby, for Chrissakes.

I think he reviewed about five books in that article but someone cropped my portion out of the review and posted it on Facebook (that's probably the version you saw). I was beyond thrilled when I read that review -- it has made me supremely happy. Remember in the 1950s and 1960s how certain people had a framed picture of the president hanging in their dining room? Or how some families would say a prayer before dinner and include the president in their prayer? I'm going to do that with Nick Hornby!

I've been praying to Nick Hornby for years. He is a just and benevolent god. When I went away to college, I spent the first few months fascinated by the subtle linguistic differences of my classmates. My friend from Arkansas said "lemon Coke" for "7Up," and Californians said "stoked" and "he's all, let's go" instead of "psyched" and "he was like, let's go," and so on. But one thing was universal. Whether you hailed from Montana , Arizona , Georgia , or New Jersey, when Billy Idol sang, "Here she comes 'round singin' Mony Mony," everyone, without exception, knew to yell, "Get laid, get f*cked!" This is a long and inelegant way to bring up Billy Idol, who makes an important cameo in the book. Wherefore Billy? Is it the sneer? Because he was in L.A. in 1983? Or is this, too, autobiographical?

He was a very sexy guy! And, yeah, maybe it was the sneer. But it was also this sense of recklessness and id coming out -- he didn't feel phony at all, he felt like an uncaged animal. I wish I could say that the scene when Allie has sex with him is based on my life, but it's not. It was simple wish fulfillment!

It's too bad you couldn't have contacted him way back when. I'm pretty sure he spent most of 1983 dancing with himself.