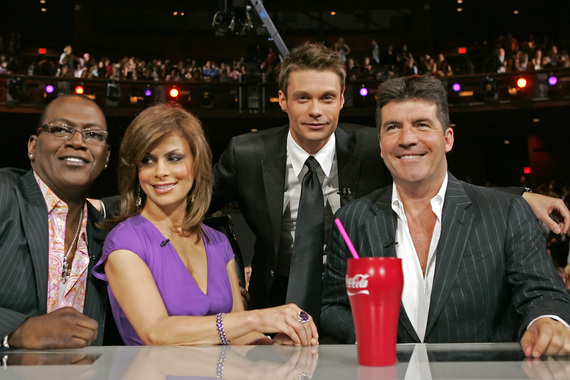 Ryan Seacrest has porcupine-spiked hair. Record executive Simon Cowell, with lily-white veneers and a chest full of hair, is relatively unknown. Paula Abdul's most recent professional milestones include a Greatest Hits CD and a gig choreographing the cheerleading scenes in American Beauty. Randy Jackson, an acclaimed bassist who strummed for Journey, Aretha and Mariah, unironically wears what look like light green-tinted transitional lenses. The year is 2002. My seventh birthday is in a few weeks. I am a full seven years older than American Idol.

In just two years, the singing competition, spearheaded by Spice Girls manager Simon Fuller, would come to be the most-watched show in America, a position it would maintain, like a belter's tight grip on a microphone, for seven of its 15 seasons. Paula eventually ditched the beehive and Ryan the streaky highlights. Simon, the panel's lovable Antonin Scalia-type, berated talentless naïfs with acerbic, mean-spirited wit, and, thankfully, vengeful hopefuls berated him back. Randy said "dog" either at the beginning or end of every sentence. The four of them -- Ryan, Paula, Simon and Randy -- were a sort of familial quartet to whom we'd report every Tuesday and Wednesday, and though their bickering was awkward, their interruptions tense and unsavory, the chemistry between them was familiar and entertaining.

More important than its judges and its host, though, was American Idol's contestants, a diverse crop of singers from every corner of the country, mothers and daughters, fathers and sons, each thrust into the spotlight and given hair stylists, makeup artists, vocal coaches and a repertoire of bygone classics to sing. America, and no small portion of it, congregated by the television set to watch unknowns perform for just under two minutes, sometimes bombing -- forgetting words, missing key-changes, quarreling with the judges, turning in catastrophically unfortunate group numbers -- and sometimes reaching prophetic heights, as nineteen year-old Fantasia Barrino did singing "Summertime" in season 3, right in front of guest judge Quentin Tarantino.

At the end of each episode, performances were played back in fragmented clips and, finally, we'd quickly jot down phone numbers. Few things garnered such fervent fandom as that two-hour period after each show when votes were cast and singers were vouched for. Families atomized into different crevices of the living room to restlessly punch numbers and, sometimes, whimper at the dial tone on the other end, telling us the line was busy. We, the idolatrous followers of Idol, decided who we wanted to survive another week, who we wanted festooned in confetti, who, in essence, we wanted to hear on the radio. American Idol was not simply the biggest television show in the country -- 74 million votes were cast in the 2007 finale, more than half the amount cast in the following year's presidential election -- but rather a vehicle for our inherent critical sensibilities, a way for everyday, cable-watching Americans to harness their collective power and decide what would be woefully overplayed on Hot 100, at uncomfortable school dances, and on our mom's iPod nano.

Idol's judges, minus Cowell, may have been a stammering group of equivocators, more often than not embarking on circuitous, lengthy critiques and saying absolutely nothing, but they were the show's bedrock nonetheless. Randy's comments were almost always frustratingly ambiguous; he enjoyed furrowing his brows and shaking his head in a somber lament: "Man, I don't know, dog." If Paula liked a contestant, she said they were beautiful. If Paula didn't like a contestant, she said they were beautiful. Even Simon, whose critical barometer was far more attuned to vocal technicalities and song selection than his peers, could be cruel for the sake of cruelty. But Idol's charm was that viewers had agency; the show came before the dawn of Yelp and Uber, before we had the power of a five-star review at our fingertips. Its viewers were curious and empowered, and perhaps nothing was more gripping than that central fissure, illustrated week after week, between the judging panel and the viewers, because what it really exemplified was the titanic struggle between the critic and the populist, the "expert" and the layman.

The highest grossing movie of 2016 thus far is Batman v. Superman: Dawn of Justice. In less than three weeks, it's earned more than $700 million worldwide. It's also, according to film critics, one of the worst films of the year. The New York Times' A.O. Scott wrote, "The corporations that produce movies like this one, and the ambitious hacks who sign up to make them, have no evident motive beyond their own aggrandizement." The Atlantic's Christopher Orr called it "a tiresome, ill-tempered film, and one too lazy even to earn its dismal outlook." The obvious interpretation is that, with an immense crater between them, the general public wants something much different than the critic does. So long are the days when a bad New Yorker review would tank a film. The general public no longer sees the critic as the embodiment of intelligent discernment because now, the very art of criticism is one in which we all participate, subconscious or not. We always judged things. Now, we have more ways to express our judgment.

In its heyday, Idol sparked impassioned debates amongst its millions of fans, many of whom would take to online chat rooms in the dark corners of the cyber-labyrinth to chew over the performances or simply bash each other's favorites. There was money to be earned in Vegas over this stuff; odds makers would measure each contestant's phone line to see whose was busiest. In the days of the T-Mobile Sidekick, an Idol finale brought it only slightly less viewers than the Super Bowl. Why? Because, much like the Super Bowl, we could see unknown talents, in real time, do things we couldn't; and unlike the Super Bowl, we felt we had a hand in deciding their fate.

There was the dogfight, as Randy might say, between boy-next-door Kris Allen and the exuberant rocker Adam Lambert, who were roommates on the show. A year before, two Davids, the scruffy Cook and infantile Archuleta, went head-to-head in a nail biter. In each case, the finales were tense and the winners understandable. But season 5 most aptly demonstrated Idol's double-edged sword. The winner, Taylor Hicks, is generally regarded as the show's gravest mistake, a harmonica-playing blues musician, and now a restaurateur, who nicknamed his curiously large phalanx of supporters the "Soul Patrol." Hicks, who in 2012 performed at the Republican National Convention, took out Katharine McPhee, one of the show's best-ever vocalists, in a confusing, disappointing finale. Two weeks earlier, Chris Daughtry, whose band went on to score two number one albums, was offed; the camera flashed to Cowell, aghast at the result, surely wondering, in his endearing brand of Anglo-sarcasm, what the hell Americans were thinking.

Idol tried to push back against this when it introduced the "judges save." The panel was allowed to use it once, when it unanimously deemed a contestant wrongly eliminated. The viewing public, though, still won out; Idol had, irreversibly, democratized the landscape, allowed its viewers to wield their phones with the same power that the critic wields his pen. Did Americans make some mistakes? Yes -- Jennifer Hudson, who would go on to win an Oscar, came in seventh. Lambert lost to Allen. Pia Toscano, another powerhouse, came in ninth. Protesting the latter result, Tom Hanks and Ashton Kutcher both tweeted their ire towards the voters.

But it's also worth noting, now that American Idol has officially ended, that the show did something quite revolutionary: it eliminated that patina of elitism that made the art of criticism the exclusionary domain it was and is. It gave fans the power to combat the industry insiders that told them how and what to think. It gave people a voice, interested them in music, and mobilized, to Katharine McPhee's chagrin, some hidden constituent of Taylor Hicks fans. It spawned copycat shows all over the globe, gave us viral videos of tragic auditions. It also gave us Fantasia Barrino and Jennifer Hudson. Perhaps, then, it was time to go.